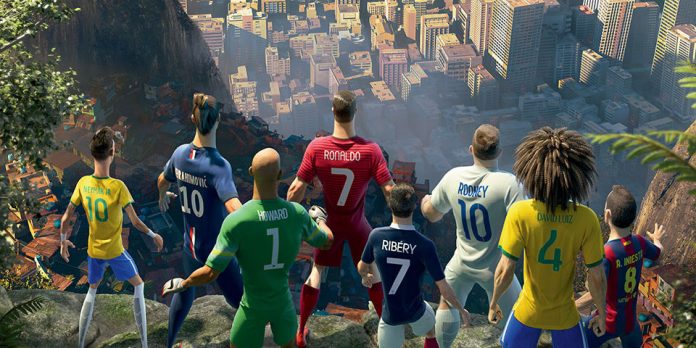 With the World Cup looming so close on the horizon, the adverts are becoming more and more prolific wherever a soccer fan might be viewing. Youtube has been lit up by view counts in the millions on some of the best ones.

All of you Soccerlens regular readers will have already seen the magnificent Nike: The Last Game ad

It’s long by traditional standards of commercials but it is a magnum opus of sheer class and worth every second. Do NOT decide not to watch it based on its length! At time of counting it had been viewed on Youtube over 12 million times.

The world of football has changed and the game is taken over by clones, but Brazilian legend Ronaldo seeks them out from their new mundane jobs and arranges a winner-takes-all game. Can the animated versions of Cristiano Ronaldo, Wayne Rooney, Neymar, Zlatan Ibrahimović, Andrés Iniesta, David Luiz, Franck Ribéry and Tim Howard put the Beautiful Game back the way it should be?

The Game Before The Game

With another star-studded cast, this time the actual people, Dr Dre has gone all out with his World Cup advertisement for Beats headphones. Take a breath and I will give you the cast…

The focus here is on the pre-game rituals and build-up, and includes a hint of the forbidden sex. Shhhh, don’t tell the managers.

It has seen another massive Youtube response with over 8 million views to date. Arriving a few days earlier than Nike’s, it hasn’t seen quite the same success level but still exceptionally popular.

Never one to miss a big advertising opportunity, McDonald’s ditch the expensive cast and go for the cuteness of youngsters pulling off some very impressive shots. Throw into the mix a lady in heels and an old man on a mobility scooter with unexpected skills and you will be just dying for a hamburger.

Emirates Airlines pitch in with an ad about the different generations of football stars, where Ronaldo overhears starstruck fans, only to realize that they mean Pele who is just beyond him. The tables are then turned as a teenager gets Pele to take his picture with Ronaldo, oblivious to the all time great he turns camera-man.

Sports apparel company, Adidas, bring in some more stars, ranging from current players Gareth Bale and Lucas Moura to legends David Beckham and Zinedine Zidane. They begin competing in a video game but then take to the real thing, destroying Beckham’s palace in the process. Beckham appears unconcerned but I can’t wait to see Victoria’s face when she gets home!

Don’t miss any of these great ads, some great ways to build the thrill for the World Cup around the corner.