“It’s been said that Americans learn about world affairs and geography through wars; the rest of the world learns through soccer.”

Co-author Steven Stark as quoted in the Introduction. That sentence aptly summed up a book which was written for an American audience but will entertain and educate readers regardless of their nationality.

A father and son authoring team have provided a mini-encyclopedia of World Cup country profiles, facts, history, humor, politics, quotes, statistics and trivia. This book is extremely detailed, well-written and organized for fast reference as you watch the competition. The authors interject doses of humor to complement numerous quotes and eighty years of historical data. The sheer volume of research should satisfy the most fervent supporter.

Individual chapters are dedicated to all 32 participating countries. The Starkes detail each team from strikers back to the keepers along with the managers. Two interesting features were small individual maps and country facts courtesy of the CIA Fact Book and other sources. If you thought that it would take a doctor to decipher the team selection of Diego Maradona, you will learn that Argentina has one psychologist or psychiatrist for every 1000 residents. Did you know that dueling was legal in Paraguay if both participants are registered blood donors? Italy and Paraguay will be dueling in Group F. Paolo Maldini came within one game from dueling against his father, Cesare, who was the Paraguayan manager, at World Cup 1998. You will also find an interesting quote about each team. My favorite came from Frenchman and former Manchester United legend, Eric Cantona:

The worst or not, Mr. Domenech is one of the longest serving national team managers along with Ricki Herbert of New Zealand, Morten Olsen of Denmark and Otto Rehhagel of Greece.

A concise two page section detailed all 10 stadium venues in South Africa and a chapter discussed climate and altitude in specific cities. Altitude has not been a factor since 1986 in Mexico and we haven’t experienced a Southern hemisphere (winter) World Cup since Argentina in 1978. Both of those facets were emphasized during an intriguing historical and present day analysis. One quote by the authors stood out:

“Players run far more in 90 minutes than they did in the past. More than 10 kilometers (or six miles) a game. It’s the equivalent of an NBA (National Basketball Association) player having to go up and down the floor 175 times without timeouts or substitutions. In Johannesburg where the oxygen level is about 20% less per breath than at sea level, that could make a huge difference.”

The authors quoted BBC Football expert, Tim Vickery, in this section. He noted that ball-possession sides such as Brazil and Spain would keep running to a minimum to deal with the rigors of altitude. According to the authors, Bloemfontein, Johannesburg, Polokwane and Rustenberg will pose the most challenges in terms of altitude and weather. On 12 June, England meets the USA in Rustenberg at the Royal Bafokeng Stadium almost one mile above sea level.

Whether in front of your television, computer screen or in South Africa itself for the competition, “World Cup 2010: The Indispensable Guide to Soccer and Geopolitics,” will be a good companion and reference source. 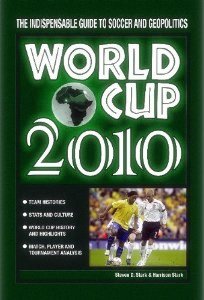 “World Cup 2010: The Indispensable Guide to Soccer and Geopolitics” by Steven D. Stark and Harrison Stark

Steven D. Stark, a former world sports columnist for the Montreal Gazette and the author of three previous books and one e-book, has been a commentator for CNN, National Public Radio, and the Voice of America, where his role was to try to interpret American culture to the rest of the world.

Harrison Stark, currently a student at Brown University, has been a ball boy for Fulham FC, where his claim to fame was that he was once hit by a bottle thrown by an opposing fan.

Follow the build-up to the 2010 World Cup and the action as it happens on the book’s website: http://worldcupsoccervoice.blogspot.com/.

The publisher at Soccerlens and the reviewer were not compensated for this book review. We would like to thank Ginger Bock, Marketing Representative, at Cardinal Publishers Group for her kind assistance.