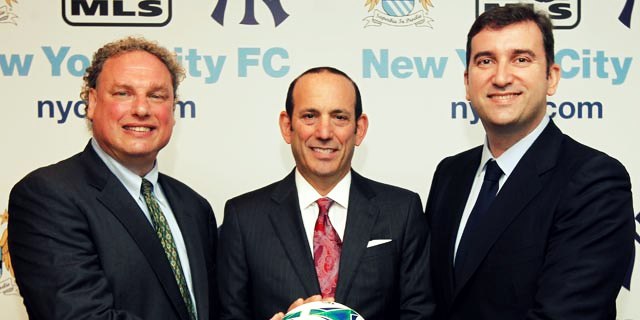 In what has to be one of the most colossal evil empire mergers in major modern sports history, Manchester City and the New York Yankees have joined super-villainous forces to create the MLS’ 20th franchise: New York City Football Club.

Okay, so that’s probably not a team name that garners consideration for a Creativity and Innovation Excellence Award, but with Man City being majority owners in the freshly launched MLS venture, you just knew “City” had to be in there somewhere.

Much more importantly though, by spending the reported $100 million to officially bring New York City FC into existence, the Manchester City ownership group has taken an extremely significant step towards truly growing and globalizing their football brand.

While we’ve seen many other Premier League and La Liga giants make the ocean-hop trek to the United States for whirlwind preseason tours, those brief European occupancies in the American sports consciousness have failed to fully unlock the massive financial and fanatical potential of the US’ numerous media markets. They whetted the American soccer fan’s appetite in other words, but ultimately provided no lingering product to satiate it.

Manchester City hopes this move has started the momentum necessary to change that. When NYC FC actually kicks off in 2015, they will of course still be subject to the numerous financial regulating, draft pick orienting and league-first prioritizing rules of the MLS, but they will also be holders of the Premier League’s first permanent presence in America’s top soccer league… sort of.

Manchester City’s CEO, Ferran Soriano, who earned a large degree of respect for his previous shaping of Barcelona FC’s current course, has made it clear that NYC FC will in no way serve as a feeder or out-to-pasture club for their bigger Manchester soccer sibling.

Instead, Soriano’s vision for New York’s newest footballing franchise relies on strategies already pretty commonplace in Major League Soccer. Building the team with promising youth players, scouting across the Americas and Europe for value-based talent, and just generally proving to the league that they will always continue to strive for a sustainable on-field/off-field product in the city of New York is all securely part of the plan.

Obviously marketing campaigns will likely align NYC FC and Man City FC when promotionally convenient, but the MLS’ built-in regulations really force City and its owners to build this team in a mostly responsible way, and that’s a great thing for both parties, when you consider the struggles the ill-fated New York Cosmos experienced.

While many things are unclear about New York’s newest professional team, like where they will even play their first home matches for example (Queens? Brooklyn? A state of the art floating stadium on the Hudson River?), the move to finally capture a MLS franchise in the US’ top media market (as opposed to the “New Jersey” Red Bulls) shows both optimism in Manchester City’s vision of what the MLS could eventually be and validation for American soccer fans that US soccer is still moving towards a more commercially successful future.