Soccer season in the USA is almost here. We’ve had some exciting times already, with both DC United and Houston Dynamo advancing to the semi finals of the CONCACAF Champions Cup, the Los Angeles Galaxy completing successful tours of Australia/New Zealand and Asia, FC Dallas traveling to Brazil, and the United States U-23 team qualifying for the Beijing Olympics later this summer after missing out on Athens in 2004.

On to the first set of fixtures this weekend:

Réal will be looking to overcome the curse put on them at their founding, while Chicago will be looking to get off on the right foot to return to the playoffs. Cuauhtemoc Blanco will be starting his second season for Chicago, while RSL have Robbie Findlay to rely on for goals.

New England Revolution v Houston Dynamo
The re-match of all re-matches, in the first fixture of the year! Last year’s MLS Cup Final will leave New England out looking for revenge, while Houston would like to keep up their dominance of the league.

Kansas City Wizards v DC United
Kansas City’s first designated player, Claudio López, will be up against a DC defense that includes Devon McTavish, who has scored three goals so far this season in the CONCACAF Champions Cup.

Both of these squads had disappointing seasons last time around. With a busy pre-season of touring, LA should be well up for a match against a team that hasn’t really found their mojo in the past few seasons.

Don’t agree with my predictions? You think I’ve got right out of my tree? Then prove me wrong by joining Major Fantasy League Soccer.

Baseball, pointy football, and basketball all have many successful fantasy leagues, but with fewer fans, a good MLS fantasy league is hard to come by. The one on the official MLS website is completely unrealistic, giving players six transfers a week and a salary cap that would make Roman Abramovich jealous. 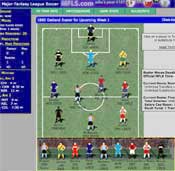 However, I have just made my team over at MFLS, and I can tell that it will be an interesting experience. Players choose their own teams, but they are subject to the same kinds of restrictions real MLS clubs are — a tight salary cap, only eight internationals allowed, and a limit of thirty-five transfers for the entire season.

Then, based on the players that the virtual Mourinho has picked (which includes a manager, so it may be more like a virtual Abramovich or Glazer) and how they and their team perform in matches, players earn points. The player with the most points at the end of the season wins. Simple yet entertaining.

Another exciting feature of MFLS is the match prediction system. Players that have created a squad can also predict the score of each MLS match, with correct predictions winning points. Again, the player with the most points at the end of the season wins.

So enjoy the 2008 MLS season not only from your comfortable spot on the couch watching the TV updates, but from your computer, where you can win your own virtual MLS Cup.