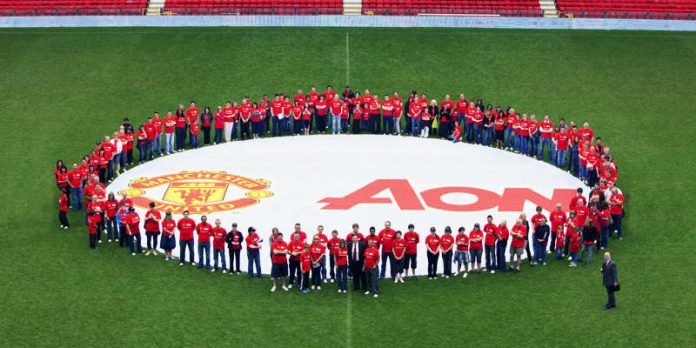 Manchester United have signed a new eight-year deal with Aon which will see the name of the insurance company attached to the club’s training ground and training kits. The agreement was announced on Monday.

United’s training ground lies on the outskirts of Manchester, in Carrington, and it is the first time they have sold rights to their training ground. According to the agreement, the ground will be renamed to ‘Aon Training Complex’.

Aon’s part in the training complex will not end with just the name as the insurance company will also be providing best-in-class advice to the club on talent development, risk management, health and wellness.

Aon will also be the ‘Presenting Partner’ of all Manchester United pre-season tours for the duration of the deal, starting from Tour 2013 in the Asia Pacific.

Moreover, the commercial appeal of the current Premier League leaders allows them to have separate sponsorship deals for their training kit and their play kit.

Aon already occupy the rights to sponsorship on Manchester United’s kits but it was announced that from 2014 onwards, Chevrolet will replace Aon because of a $559 million, seven-year deal with United States car manufacturer, General Motors.

The financial terms of this deal with Aon were not disclosed and the Manchester United’s commercial director, Richard Arnold, only said:

“I am delighted this cements our relationship with Aon for a further eight years.

“Aon knows that every employee, including the first team, drives the success of our club.

“The Aon Training Complex is all about winning and preparing individuals, identifying talent and performing at the highest level to achieve success. “

Previously, the logistics company DHL acquired the training kit sponsor spot but United has said to have negotiated an early conclusion to that deal in order to look for a more lucrative offer elsewhere. The deal with DHL gave them around £10 million a year and Guardian this new deal with Aon could be worth up to twice that amount.

Manchester United are currently 15 points clear of second placed Manchester City and it puts them in a really strong spot to negotiate all these deals. If any of the fans were stressing about the financial side of the clubs, the deals with Aon and GM will take care of that.

However, executive vice-chairman of the club, Ed Woodward, felt the need remind their fans that they are not going overboard with the sponsorships and revealed that there were no plans to seek a sponsor for their historical stadium:

“Old Trafford will not be sold”

“It is a privilege for Aon to be associated with the world-famous Manchester United training facility.

“As a symbol of innovation and excellence in the world of sport, it is revered around the world.

“We have the utmost admiration and respect for the 800 team members at Manchester United and the work they do and look forward to working with them to help build sustainable performance around the world, like we do for all our clients.”

Aon has a strong base of operations in the Asia Pacific and they will be focusing on engaging with Manchester United’s 325 million fans in the region with this year’s Tour 2013. United will visit Bangkok (Thailand), Sydney (Australia), Yokohama & Osaka (Japan) and Hong Kong (China).