After 15 years of heartache, success and a little more success, Charlton Athletic Chairmen Richard Murray announced to a stadium of Addicks fans in 2006 that legendary boss Alan Curbishley would be leaving his post at the end of the season.

The announcement, made on the April 29th before a Premier League fixture, stunned thousands of supporters crammed into The Valley and shocked Athletic players who were none the wiser. As many expected, Charlton crumbled to a 2-0 home defeat against European place chasing Blackburn Rovers.

Nearly three years on, four managers later and in excess of £20 million worth of debt, The Addicks are situated rock bottom of The Championship and 12 points adrift of safety. The HSBC building society has also recently withdrawn their overdraft facility, but Murray has quelled reports that the club face going into administration.

So what has happened to the club that survived the Premiership drama for five years before internally combusting? Well, let’s start with Curbishley. His reason for stepping down from the post was because of the belief that he had achieved all he could at the club. In the time period of his notice, Alan had been linked with the England job and was even interviewed by the F.A before their decision to appoint Steve McLaren as boss.

Curbishley’s departure from the club after 15 years was always to have a negative effect in the dressing room but surely not as deep a one to push the stable team into a steep relegation battle in the following season. When Sir Alex Ferguson retires from football after more than 20 years in the job, Manchester United wouldn’t be expected to drop their standards of football – that is if they employ a manager with a proven track record that can handle the pressure of Premier League football.

Iain Dowie was appointed after a great record with Crystal Palace. Of course, the disappointment of relegation was overwhelming for both Dowie and Palace, but with it they were given the chance to start again and rebuild during the summer for a promotion push. However, despite relegation, Dowie had impressed as a manager and rumours circulated that Palace Chairmen Simon Jordon had been approached by a number of top flight clubs wishing to attract Dowie. In fact the only approach made was from Milan Mandaric of Portsmouth.

In his Charlton reign he was given more money than any other manager, in order to buy success for the club, but to their dismay couldn’t keep the team away from the relegation zone. A disastrous start to the season spelled trouble at The Valley and after only 12 games in charge was dismissed, leaving Charlton manager less and in the relegation zone.

Les Reid was drafted in temporarily but suffered the same fate as Dowie. Unable to inspire a sorrowful team he was replaced by ex-West Ham boss Alan Pardew. Appointed on Christmas Eve to a Charlton team on 12 points and a -20 goal difference, Pardew was unable to steer Charlton clear of relegation from the Premier League.

Many football enthusiasts expected a rebound for the Addicts, especially after the signings of Luke Varney and Chris Iwelumo. However, Charlton were unable to mount a serious title challenge and ended the season in lowly 11th.

The road to League 1 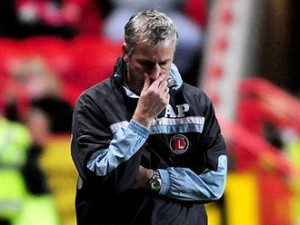 Therefore, the 08/09 season would be a test to both Charlton’s and Pardew’s resolve and after opening victories against Swansea and Reading, Charlton fans sensed hope for the first time since he took charge.

The winning start failed to continue and during the winter spell of matches, Charlton suffered 17 matches without a win. Expectedly Pardew was drafted out of The Valley equation and Parkinson took over from an assistant manager position to try and halt the slump.

So with 37 games played, Charlton sit 24th in The Championship and 10 points from 23rd placed Southampton. For the remaining nine fixtures, is there hope of a miracle revival?

Unfortunately for The Addicks – four wins look unlikely – let alone achieving enough points to secure safety. For Charlton fans they must walk the same route that so many top flight teams have faced. Over the years the likes of Wimbledon, Leeds United, Leicester City and Bradford have all descended from the Premier League but then continued a downward spiral to the lower leagues.

The problem clubs such as these face, is the unwritten law of the ‘one year chance.’ This notion has two effects on recently relegated clubs.

Firstly, the board give the current manager one year to improve the clubs standing. Promotion in that year is priority number one, in order to avoid as much debt problems as can be helped – but also to satisfy fans that have been used to the entertainment that Premier League football comes with.

Secondly, the club’s top players give the team one year to improve on their position – again promotion – before they leave to highest bidder.

Some teams are able to build during the summer and push for re-promotion the following season. Birmingham City and Reading are currently proving this in the Championship, seated 2nd and 3rd respectively.

However, when managerial changes and player departures rock clubs, there is only one way that the team will head. Moral, motivation and inspiration are all key factors for a healthy team and unfortunately for Charlton, they lack all three.

League 1 is their fate. Whether the spiral continues after that has yet to be seen.