And another major international tournament came to a close with Portugal becoming champions of Euro 2016.  A tremendous team effort brought Portugal the trophy, but it were the individuals that brought them to the final. Discover where the Portuguese players rank amongst the other players in FanaticData’s final Top 15 ranking of the Most Valuable Players in Euro 2016. 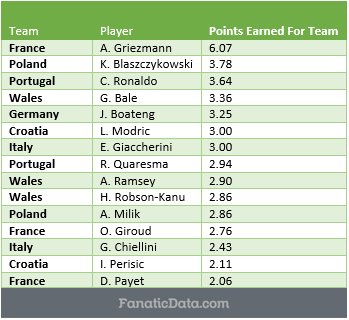 There are two players representing the champion Portugal’s side in Cristiano Ronaldo and Ricardo Quaresma.  But it is a player from the loser of the final, France, who has rightfully earned the title of Most Valuable Player of Euro 2016.  Antoine Griezmann’s unexpected success in Euro 2016 earned his side over 6 points in the tournament, outdistancing himself from his competitors.  He finished with 61% more points compared to Poland’s Kuba Blaszczykowski, the player who finished 2nd in the ranking.

Congratulations to Antoine Griezmann for becoming the top striker and overall top player in the tournament.  Griezmann is one of 4 strikers to make the Top 15. The winger position has the most players in the Top 15 with 8.  There are also 2 center-backs and one midfielder in the ranking.  It is evident that because of the preferred 4-5-1 formation by teams during the tournament, most of the offensive load fell on the wingers.

Griezmann also represents 1 of 3 French players to finish ranked.  This makes France, along with Wales, the most represented nation in the top 15.  Overall, 7 different nations are represented in the ranking.

Below is the final most valuable starting squad in Euro 2016 (goalies not included).  The selected formation of 4-5-1 is based off of the most commonly used formation by nations in the tournament. 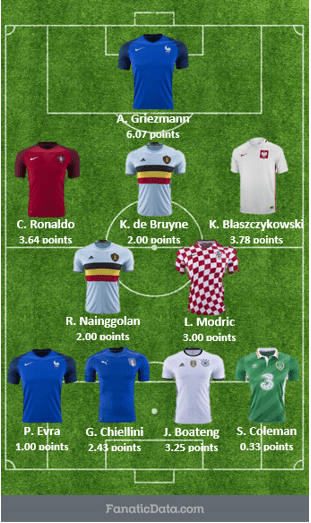 Only two changes occurred from the previous starting squad released prior to the semi-finals.  Ronaldo and Patrick Evra are the new entrants.  Belgium and Italy are the most represented nations with two players each in the starting squad.

Thanks for following the rankings throughout Euro 2016!  Until next time…