Two more rounds have come to an end in Euro 2016 and only 4 of the 24 nations that started the tournament remain. As FanaticData, we released our first Top 15 ranking of the Most Valuable Players in Euro 2016 after the group stages.  It is now time to update that ranking as we head into the semifinal matches. 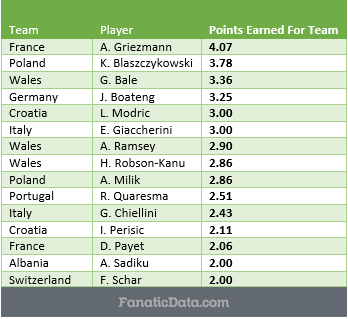 Antoine Griezmann is the new leader of the Most Valuable Player ranking in our latest update.  The top player in our initial ranking, Luka Modric, fell to 5th place.  The biggest surprise in the rankings might be Jerome Boateng, who scored his first ever goal for his nation (view below).  Because Boateng’s goal was unaided and was the only goal required to defeat their 2nd round opponent, Slovakia, all 3 points were awarded to Boateng.  He was the only player to earn all 3 points in a victory in either the 2nd round or quarterfinals of the tournament.

@JB17Official was the only player to earn all 3 points for his side in the 2nd round/quarter final of #euro2016 https://t.co/Ls56EBjYQO

Below is the updated most valuable starting squad in Euro 2016 (goalies not included).  The selected formation of 4-5-1 is based off of the most commonly used formation by nations in the tournament. 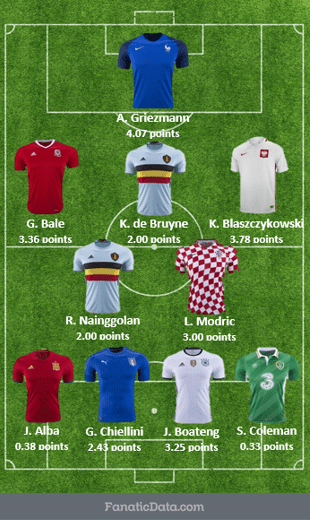 6 of the 10 players in the initial starting squad we released have remained the same. Griezmann, Kevin de Bruyne, Giorgio Chiellini and Boateng are the new entrants to the squad.  Due to the continued use of the 4-5-1 formation by nations, the duty of the left and right backs have primarily been limited to defense.  As a result, none of the players in those positions have had more offensive input than Jordi Alba’s or Seamus Coleman’s relatively small amount of points earned.  From the perspective of nations, Belgium is the only nation to have more than one player represented while Portugal is the only semifinalist to not have a single player in the starting squad.