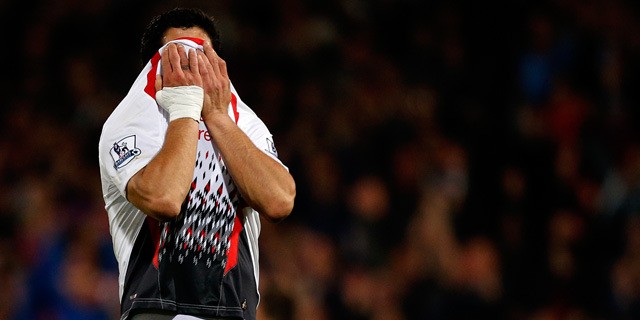 For many watching one of the iconic moments of the season will be Luis Suarez sobbing uncontrollably, with his shirt pulled over his head, being led from the pitch by Kolo Toure and Steve Gerrard at the end of Liverpool’s traumatic 3-3 draw at Crystal Palace.

A season that began with the Uruguayan striker serving out the remainder of his ban for biting Chelsea’s Branislav Ivanovic, culminated with him being widely recognised as the premier player of the season. The choice of both the Football Writers and the PFA as the outstanding talent, there are surely few that would dispute the logic of his selection.

Despite all of the accolades, plus his 31 goals, making him comfortably the top league goal-scorer, and Liverpool’s return to the top table of European football with qualification to the Champions League, the season will have ended with twinges of regret for Suarez.

Of course, if someone had offered all of this to him – or anyone else at the Anfield club for that matter – before a ball had been kicked back in August, they surely would have snapped hands off grabbing for it. The latter months of the season however saw the club glimpse something much bigger with, at times, the league title looking close enough to touch. A home defeat to Chelsea, plus that inexplicable collapse at Crystal Palace however, cruelly dashed away the dreams of glory.

For Suarez, it may just have been a cruel reminder that for all the skills and endeavour of Brendan Rodgers, Liverpool remain a work in progress. Yes, they will be stronger next season, but it’s not clear that their gain will not be matched, and possibly passed by a Chelsea with a Mourinho-shaped squad and a resurgent Manchester United under Louis van Gaal.

Who knows, Arsene Wenger may even conjure a title challenge from the Gunners that doesn’t fade with the bursting of the spring buds. This season was a golden opportunity for Liverpool. Next season may be more difficult.

With this in mind and the rumours already circulating in full flow of a renewed bid from Real Madrid, it may be another uncomfortable summer for the club as they seek to fend off approaches for their talismanic striker.

What may concern Rodgers and the Liverpool hierarchy this summer particularly is that for a good few weeks, Suarez will be out of their controlled environment, playing for his country in the Brazil World Cup. Approaches from other clubs via international colleagues are not unheard of and conversations with agents will surely be a regular feature.

Would Suarez want to jump ship and head off to Real Madrid? Who can say? It has to be a distinct possibility however.  Like many players at his level, whilst money will always be a factor, they want to be successful on the biggest stage, and that means playing at clubs most likely to win things, plus there is of course the inevitable draw that the name Real Madrid has in the Spanish-speaking world.

Losing Suarez would be a major loss not only to Liverpool, but also to the prestige of the English game as a whole. It seems inevitable that Real Madrid will try and sign the player, and with their multi-layered transfer approaches as complex as ever, it’s difficult to discern how Suarez will feel if the opportunity arose. For the good of the game in this country however, let’s hope Los Blancos draw a blank.