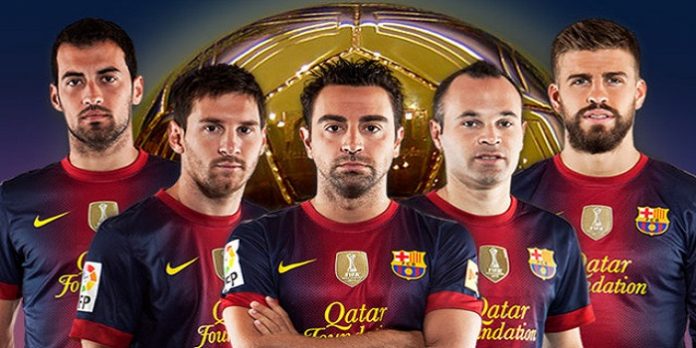 April 23, 2013: Bayern Munich 4-0 Barcelona – The night the Catalan juggernaut was exposed in the most spectacular of ways. A week later at the Camp Nou, the Bavarians went on to add a further three goals to the aggregate score line, as if to prove it wasn’t a fluke.

Since then, Catalan newspapers have been sent into overdrive, desperately throwing forward the names of players who could, in theory, restore Barcelona’s position as the dominant force in world football.

Thiago Silva, Mats Hummels, Vincent Kompany and David Luiz are just some of the defenders that have been put forward as players who will single-handedly solve Barça‘s defensive crisis.

Curiously, more attacking options such as Wayne Rooney, Sergio Aguero, Juan Mata and Robert Lewandowski have also been linked with a move to Catalonia, with Barcelona seemingly mulling over the idea of trying to simply outscore the opposition, regardless of how many they concede.

Whether these links are true or not remains to be seen, but all would rather be missing the point, irrespective of how much individual talent each player would undoubtedly bring. For whilst Barcelona are patently in desperate need of a truly world-class centre back, the team will remain defensively fragile until Tito Vilanova installs a more cohesive defensive strategy.

As sad as it is, the tiki-taka model that Pep Guardiola brought to Barcelona has been found out. Perhaps the writing was on the wall even before last season, with Pep himself trying to alter the team’s formation in order to remain one step ahead of the opposition.

The trident of Busquets-Xavi-Iniesta – who were once able to dominate and control games with such ease – are now unable to stop top opposition from engineering incisive breakaways, leaving Barcelona’s back line regularly exposed.

Similarly, with full-backs Jordi Alba and Daniel Alves given the license to roam forward at will, Barcelona have found themselves in situations where their centre backs have had to contend with attacks by themselves on numerous occasions.

That is not to say that any of these players are not good enough to play for Barcelona.

Iniesta is at the peak of his powers, capable of mesmerising his opponents with brilliant trickery and unparalleled imagination. Busquets and Alba are players who are still improving, yet could possibly already be considered amongst the best players in their position in world football. Dani Alves and Xavi may not be as good as they once were, but still remain two of the best players of their generation.

Indeed, it is the individual quality that Barcelona have at their disposal which has enabled them to still remain a considerable force, recording a historic 100 point total last season in La Liga.

Consequently, it is apparent that Barcelona need to embrace a new approach. The philosophy of dominating possession and territory doesn’t need to change, but there does need to be a change in how careful the team are when in possession of the ball.

In order to rectify the situation, Tito should look no further than the Spanish national team who, under the guidance of Vicente del Bosque, have dominated international football whilst always looking defensively assured.

The reason for this is that Del Bosque is far more pragmatic, deploying two holding midfielders and encouraging his full-backs – particularly Alvaro Arbeloa – to get forward only when there is a genuine opportunity.

In this system, neither Xavi or Iniesta are played in their preferred roles, yet both nevertheless flourish, with Spain’s set-up allowing them to control the tempo of the game even better than they do for Barcelona.

If there was ever any doubts placed on Del Bosque for favouring a more safety first approach, the recent Confederation’s Cup has certainly banished them, instead confirming the World Cup winning coach’s deepest fears.

With Xabi Alonso injured, Del Bosque succumbed to the wishes of both senior players and the public, abandoning his double-pivot for a formation that closely resembled the Barcelona model. At points during the tournament, the Spanish – like Barcelona – played some breath-taking attacking football. However, they also began to look increasingly fragile at the back, eventually being exposed by Brazil in a manner that was strikingly similar to that of the Catalan’s match against Bayern.

The double-pivot is not a tactic that is solely used by Del Bosque to great effect, though. In fact, almost every top team – including both Champions League finalists – play a variant of the much maligned 4-2-3-1. Using this formation, teams are able to strike a happier balance between committing players forward and defending against possible counter-attacks.

The only potential problem of using such a system is that Blaugrana fans have been spoilt to the point that they now not only want constant success, but also demand attacking, exciting football.

However, whilst Spain’s use of two defensive midfielders has led to criticisms of them being dull to watch, other teams with the same basic template have shown that it is possible to captivate the imagination of fans around the world whilst remaining successful.

With players the calibre of Lionel Messi, Neymar, Iniesta and Xavi able to single handedly win games for Barcelona, it seems apparent that they can afford to sacrifice one attacking outlet for the good of the team. Indeed, with the opposition not able to solely rely on incisive counter-attacks, they may be forced to be slightly more cavalier in their approach, which could possibly result in Barcelona creating even more opportunities than they currently manage.

For whilst Barcelona remain in need of a world-class centre back, there are also other, subtle changes that need to occur for Culés to see their club reclaim the position as the dominant force in world football.