High school soccer in the United States is as complex and varied as the country itself. With fifty states each running scholastic sports independently of each other and with each of those states incorporating scores of city, district, and regional competitions, little is standardized beyond the rules; even the season in which the sport is played varies from location to location.

While the Northeast typically plays the sport in the fall, Southern California and parts of the South prefer the winter, and scattered states run spring seasons. Throw in privately run schools that in some cases participate in state-run competitions in others don’t, painting a general picture of the game at the secondary school level becomes a difficult task.

High school soccer’s role in an ever-changing American landscape is difficult to pin down; a shift away from from the limited scholastic version to privately-run youth clubs has left the high school game without the best players in many cases. College soccer, for years the only real option for a young player to continue his career past eighteen, plucks the majority of their talent out of those clubs; if a talented teenager wants to be seen by coaches, he must play on a top club team.

Therefore, the role of high school teams is perhaps that of a more enjoyable alternative to club soccer for some players; competing for their school’s honor rather than the more artificial image of a club side can often be more rewarding.

Soccer still holds significant sway, and is played at a high level, at select schools; preparatory academies and parochial schools are among the country’s best. In areas with historically strong programs, players gravitate to them if not inclined to play the expensive club game.

In the subjective rankings compiled by a few national organizations, private schools dominate; the ability to attract players regardless of government-imposed district boundaries allows for a greater pool of talent. 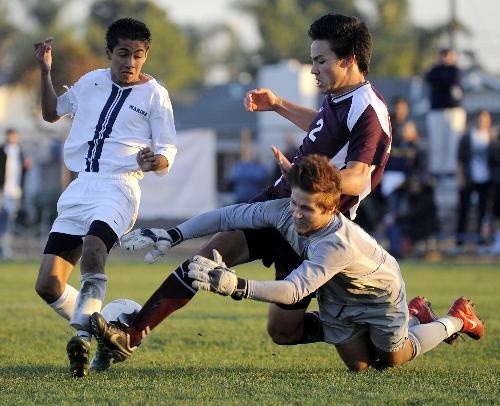 Every state has a champion, and usually several. Schools are divided into groups based on enrollment; after a regular season playing locally, a playoff structure leads to champions crowned for each of the size-based groups.

As an example, New York crowns five public school champions in five “classes”, Virginia three “groups”. Schools typically have two separate teams, junior varsity and varsity, with the former being a lower level of competition for underclassmen not ready to play with the school’s first team.

In rare cases, schools may have a third team specifically for freshman players.

Private schools typically have their own organizing bodies and compete against each other for a distinct championship based on city, region, or state. The bulk of these schools are parochial in nature.

Season length varies, but teams can play up to thirty games including playoffs; practice and games usually take place during the week, something typical of high school sports in the United States.

Almost universally overshadowed by the more popular sports of American football and basketball, soccer draws interest from a select group of fans on the high school level, meaning crowds are generally small. Facilities are often shared with football and other sports, meaning that soccer’s needs can be of secondary concern in many cases. Gridiron lines and goalpost are not uncommon sights at high school soccer matches; practice is held on auxiliary fields or the same multi-purpose space. 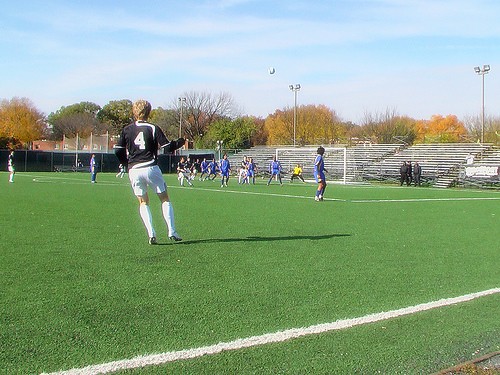 High school soccer is in no danger of disappearing – only budget shortfalls that will affect all interscholastic sports could threaten its existence in isolated cases.

With millions of American youths playing the sport and more exposure to the professional game influencing their choices, it’s possible those without the means or desire to commit to the rigors of the club system will increase the numbers of high school players.

High school soccer programs will benefit from a burgeoning overall interest in this sport; being on the front lines and more economically attractive to parents, they can fill an important role in the disorganized ladder of American soccer. The US has a long history of participatory high school sports playing major role in communities, and soccer is one of the leading lights in that regard.

The reality of high school’s place in the de facto hierarchy – that of a participatory option for more casual players or as a “fun” alternative for players who also play with a club – is unlikely to change in the future. As the professional game gets stronger in the US, developmental focus will continue to shift beyond what the scholastic game can offer.

Limits on practice time and games and conflicts with programs meant to turn the best players into potential pros means high schools will continue to lose out as the stakes grow. The best coaches, meaning those using more advanced tactics and teaching techniques, land with clubs, where the pay is invariably better.

The game is played with the Americanized clock (counting down), unlimited substitutions (also a hallmark of the American college game), and 40-minute halves; these slight rule differences are hardly barriers to a robust high school soccer scene.

At the most basic level, improving high school soccer is about improving the level of play. That means better soccer-educated coaches, players with a more natural understanding of the game, and a rising tide of American player at all levels of natural ability. A more mature American soccer culture means a better game, even in the increasingly marginalized world of high school soccer.

Perhaps more pressing than winning the club vs. school battle is standardizing the season of play and increasing cooperation and interaction between teams/organizing bodies in various parts of the country.

The number of registered youth players in the United States is a sign of soccer’s strong place in the American sporting landscape. Those youth players with dreams of playing in college or of a professional career may eschew high school soccer or treat it as a less serious endeavor; but for thousands of boys and girls who love the game and just want to play, high school teams represent a chance to compete through their adolescent years in an environment that fosters a life long attachment to the sport.

Winning is important, but high school coaches, operating under less pressure than their club peers, can give added weight to the personal improvement of their players. High school soccer’s place as a character-building experience for the young men and women who participate makes it an integral part of the game of soccer in the United States.