Buon giorno and welcome, one and all, to the daily World Cup column on Soccerlens.

It may have caught your attention that the reigning champions Italy did a bit of a whoopsie last night, failing to overturn ‘little’ Slovakia (see below) and flying home early with their collective tails between their collective legs as a result.

At least the Azzurri will be allowed the necessary time to reflect on their shortcomings in tranquil meditation by the famously forgiving Italian media.

Paraguay cemented their place in the knock-out rounds of the World Cup by harvesting the point they required from a pretty dull goalless draw with New Zealand – who themselves still stood an outside chance of qualifying for the second phase.

A win for the Kiwis would have seen both them and Gerardo Martino‘s side advance, but the Antipodeans failed to trouble the Paraguayan ‘keeper Justo Villar – registering just one shot on goal during the entire game.

The South Americans weren’t much better and relied heavily on sporadic half-chances and speculative long-range efforts to provide the breakthrough. Captain Denis Caniza came close on a couple of occasions but unsurprisingly failed to improve on his pretty dismal (1 goal in 97 appearances) international goal-scoring record.

New Zealand may rue their missed opportunity to cause what would have been a huge upset, but Ricki Herbert‘s men can go home with their heads held high after ending the tournament unbeaten and finishing above reigning champions Italy in the Group F standings.

Incumbent champions Italy relinquished their crown in dramatic fashion yesterday, crashing out of the World Cup after being beaten by a Slovakia side that had performed so unadventurously during their first two games.

With his side struggling to impose themselves, Marcello Lippi brought on Christian Maggio and Fabio Quagliarella at the break, and then sorely-missed playmaker Andrea Pirlo just 10 minutes later.

The switch made a palpable difference, with Pirlo keeping play moving through the middle and Quagliarella giving the Italians added mobility up-front.

However, despite their obvious improvement, the Azzurri suffered another body blow in the 75th minute when Vittek popped up at the near post to prod home Marek Hamsik‘s low cross – thus extending the Slovak’s lead to two clear goals.

Firstly, Antonio Di Natale pulled a goal back for Italy, rolling into an open goal after Quagliarella was denied at close range by Jan Mucha.

Di Natale’s strike restored his side’s vigour but, as they pushed forward in search of the second goal that would keep them in the competition, Slovakian substitute Kamil Kopunek seemingly once again ended their hopes of advancing – racing past a hesitant Italian defensive line to lob a shot over Marchetti and inside the far post.

However, there was still time for the impressive Quagliarella to get his name on the scoresheet, the Napoli striker floating a sublimely composed shot over Mucha from the edge of the Slovakian area in the 92nd minute.

With the game deep into injury time, Simone Pepe was presented with a chance to draw Italy dramatically level, but the Udinese winger slashed at a far post volley and his shot spun harmlessly wide.

There were scenes of abject desolation in the Azzurri camp at the final whistle as Italy, who won the tournament just four years ago, failed to reach the second round of the World Cup for the first time in 36 years.

Japan turned on the style to see off Denmark by a comfortable margin in their final Group E game in Rustenburg, thus securing the Samurai Blues a place in the last 16.

Takeshi Okada‘s side had lost five of their previous six games and only scored nine goals in 12 World Cup games, so such a confident display came as a shock to almost everybody.

Two near-perfect first-half free-kicks from Keisuke Honda (a vicious, dipping effort into the far corner) and Yasuhito Endo (a curled shot from 25 yards) ensured Japan were in front at the break and cruising.

The Asians held their lead until the 81st minute, when Jon Dahl Tomasson managed a consolation goal for the Danes, the veteran forward slicing home after seeing his weak penalty palmed fortunately back into his path by Eiji Kawashima.

However, Japan weren’t finished and, following some excellent technical play from man-of-the-match Honda, Shinji Okazaki was gifted a chance to seal his country’s emphatic win.

Japan will now advance through to the second round (for the first time in a World Cup finals not held on home soil) and will face Group  F winners Paraguay in Pretoria next Tuesday.

A late winner from the boot of Milan striker Klaas-Jan Huntelaar made sure that the Netherlands finished up on top of their group, after winning all three of their first round ties.

Bert Van Marwijk‘s men took the lead ten minutes before half time when Robin Van Persie angled a low, powerful shot past Souleymanou Hamidou following a slick one-two with Rafael Van der Vaart on the edge of the Cameroon area.

The Dutch then grabbed the winner when, in the 83rd minute, Huntelaar kept his cool to pass the ball into a gaping goal after Arjen Robben‘s 20-yard effort came back off the post.

The Oranje will now be hoping to extend their 100% record when they meet Group F runners-up Slovakia in the second round. 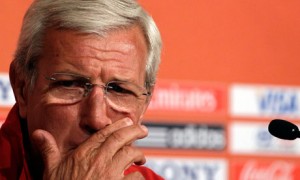 Coach Marcello Lippi has shouldered the blame for Italy’s woeful World Cup exit, admitting his side played with ‘terror in their heart, head and legs’.

It had already been announced prior to the tournament that the ‘Tuscan Tactician’ was to hand the Azzurri reigns over to Cesare Prandelli after the World Cup, but their elimination arrived earlier than expected – crashing out at the group stage after failing to beat Slovakia yesterday.

Rather than blame the questionable offside decision (Fabio Quagliarella had a late goal ruled out by the tightest of margins) which denied the reigning champions an equaliser, Lippi admitted that he only had himself to blame.

“I take all responsibility for what happened, because if a team shows up at such an important game with terror in their head, heart and legs and if the team is unable to express its abilities it means the coach didn’t train that team as he should have done, psychologically, technically or tactically.

I would have expected anything except to see a performance like we gave in the first half of the game, not to mention the second half.

I am sorry to see it end in such a fashion because I didn’t expect this. I take on all responsibilities for the choices I made and the way I introduced the team to you.

At least Lippi can take some comfort in the fact that, although Italy were pretty abject (until the last 15 minutes of the Slovakia game), they weren’t quite as bad as France – who are rapidly becoming the new measuring stick for footballing disappointment everywhere.

The aftermath in headlines…

The famously lenient Italian press have had a field day after watching their country whimper out of the World Cup yesterday. Here’s a selection of the best (or should that be ‘worst’?) strap-lines…

“Ugly Italy, One of our ugliest national teams ever, actually, the ugliest ever.” – Correire Dello Sera

“The aircraft called shame is ready to leave.” – La Stampa

“The end of a generation and of an illusion, we deserved to go out.” – La Repubblica

“It is quite right that little, almost comic Italy comes home.” – La Repubblica

“In 270 minutes we shot at goal seven or eight times.” – Fabrizio Bocca in La Repubblica

“Cannavaro is an ex-player and almost all the others were washed up. We were champions of the world and now we are the laughing stock of the world.” – Bocca again

“A team without life or personality” – Guess who?

“It is hard to imagine a greater sporting catastrophe.” – Gazzetta Dello Sport

As i say, famously lenient. 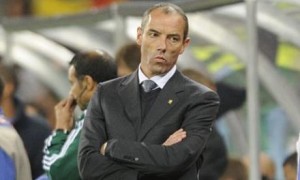 Cameroon coach Paul Le Guen has handed in his notice, following the Indomitable Lions’ underwhelming performance at the World Cup.

Cameroon finished bottom of Group E after failing to register a single point, despite being labelled as one of Africa’s brightest hopes pre-tournament.

After his side lost to the Netherlands yesterday, Le Guen told the press;

“My contract is coming up, and it was clear all along I would stop now.

Maybe I didn’t succeed in unifying the team and bringing it together. Naturally my mood is one of defeat, I know I have lost three matches in this tournament.

We leave the World Cup with lots of regrets. We know that we were carrying lots of hopes from everyone in Cameroon but we weren’t able to realise them.”

Looking for a toilet… 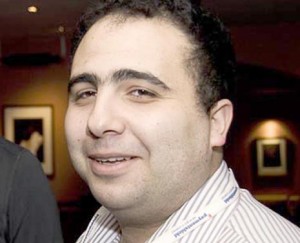 The supporter that breached stadium security during England’s 0-0 draw with Algeria game, made his way into the team’s dressing room and then berated the players for their performance, will appear in court later today.

Pavlos Joseph, from London, will appear at a special World Cup court in Cape Town where he is due to stand trial on charges of ‘trespassing’.

At a previous hearing, Joseph was banned from attending any future World Cup matches, his passport was withheld, and he was released on R500 bail.

UPDATE: Joseph’s case has just been adjourned until next Wednesday.

Is this the most ridiculous refereeing decision of the World Cup so far? (Maurice Edu might argue otherwise!)

Striker Nicklas Bendtner was forced to colour his white socks in with a red marker pen before Denmark’s Group E clash with Japan – after being told by the fussy officials that he wouldn’t be allowed to play with white tape around his ankles.

“He seemed to me [to be] a guy to take to your bedside table and ask him each time you need something. I’ve got his phone number, I might call him.”

Argentina coach Diego Maradona seems to think that Jose Mourinho would be useful in bed.

FIFA have confirmed that England will wear their ‘lucky’ all-red strip against Germany in Bloemfontein on Sunday. (F365)

England coach Fabio Capello has apparently picked the five players that will take penalties should the Germany game go the distance. (Guardian)

Thierry Henry has been absolved of any blame following the France team’s World Cup ‘mutiny’. (The Sun)

Today’s (Friday 25th June) round is as follows: