The second half of the German Bundesliga season kicks off on Friday as defending champions Bayern Munich travel to VfL Wolfsburg. If you’re able to attend Bundesliga games live but don’t have access to tickets, you can pick up Bundesliga tickets from FootballTicketTrade. Alternatively, if you’re looking to watch Bundesliga games online, check out our review of the Fubo.tv service.

This is a meeting between Germany’s top two teams but 11 points separate these two with Pep Guardiola’s side all-but wrapping the championship up before Christmas.

Bayern Munich have dropped just six points with three draws in the first 17 games of the season and have conceded just four goals with Manuel Neuer between the sticks.

Wolfsburg start the second half of the season seven points ahead of fourth place Borussia Mönchengladbach as they compete for UEFA Champions League qualification.

The Wolves lost Junior Malanda in a tragic car accident during the Christmas holiday. Malanda was only 20-years old and a Belgian under-21 international whom many predicted had a very bright future in the game.

Felipe is a long-term injury and Josuha Guilavogui is also ruled out of this game. Patrick Ochs is a doubt with a shin-bone infection that has prevented him participating in the final training sessions this week ahead of round 18.

The champions have been hit hard by injuries this season but it hasn’t slowed them down at all.

Mehdi Benatia returned to training this week and could start in the centre of defence on Friday. Philipp Lahm still has quite a while to go before he can play again following his broken ankle suffered in training two months ago.

Xabi Alonso and Sebastian Rode are doubts but Bastian Schweinsteiger has been give the all-clear to play. 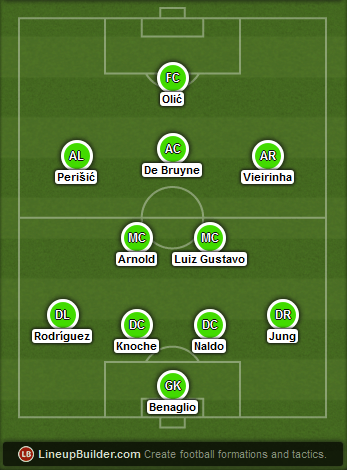 Dieter Hecking plays the 4-2-3-1 formation. Naldo and Robin Knoche has started nearly every game in the centre of their defence this season and will be protected by former Bayern Munich man Luiz Gustavo. Kevin De Bruyne has been involved in 39% of their goals this season (3 goals, 10 assists) and will be supplying former Bayern striker Ivica Olić. Bas Dost is the backup striker but has only started three games this season. 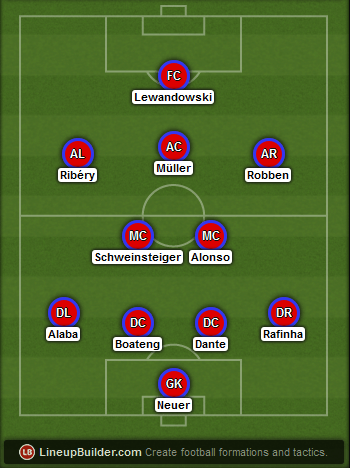 Pep Guardiola’s side dominate possession and dominate pretty much every game in Germany. This will be seen as their toughest test of the season as Wolfsburg have won seven and drawn two of their nine home matches this season (and Borussia Dortmund have been hopeless). They have the midfield to maintain possession and an attacking four that can open up any defence.

Thomas Müller vs Luiz Gustavo
These two should know each other well from playing with each other. Thomas Müller is a very clever player whilst Luiz Gustavo does get beat by good dribblers and is susceptible to both fouling the opposition and picking up cards. The two centre-backs have generally played very well this season but will have a difficult game with the movement of Müller, especially if the World Cup winner has the beating of the Brazilian holding midfielder.

Arjen Robben vs Ricardo Rodríguez
Wolfsburg have a solid left back in Ricardo Rodríguez, who kept Arjen Robben quiet for most of the first meeting between these two earlier this season. He doesn’t get beat too often whilst he does win back possession for his side. However, Bayern’s Dutch forward is the club’s top scorer in the Bundesliga this season and has been unstoppable in many matches this season. Rodríguez will be hoping Friday isn’t one of those occasions.

Franck Ribéry vs Sebastian Jung
On the opposition flank, right-back Sebastian Jung faces a difficult task up against Franck Ribéry. The French forward missed a lot of games through injury in the first half of the season, only starting seven. This disruption has certainly had an effect on his productivity, scoring only two goals and recording three assists. If he comes out of the Christmas break fresh and in top shape for Friday’s game then Jung faces a difficult evening.

Prediction: Wolfsburg 1-2 Bayern Munich
Wolfsburg have a good home record, are second in the league, have some top players and should be able to keep this one close. However, Bayern Munich had a fantastic start to the second half of last season under Pep Guardiola, are set to run away with the league again and have an abundance of talent throughout their squad. We’re probably being harsh on the visitors by suggesting they may concede a goal but we think they’ll win none-the-less.