Sportslens.com
Home Blogroll Why Jamie Vardy Is The Deadliest Striker In The Premier League

Jamie Vardy is quickly turning into a phenomenal goalscorer for Leicester City. The former Fleetwood Town hitman, who until a little more than two years ago had never felt what it was like to be playing in the top flight, is now putting established top-flight defences to shame; he is the top scorer in the Premier League at the moment.

Vardy’s incredible rise has even seen him being passed through the ridiculously silly rumour mill that feeds on any scrap in times of zero transfer activity, as Real Madrid are understood to be keeping tabs on the striker. Is it right that all the buzz is heading Vardy’s way? Apparently yes, according to the stats men.

Vardy has scored ten goals in ten games for Claudio Ranieri’s high-flying Foxes this season, and is currently on an incredible run of scoring in seven games on the spin. His goals per minutes average is the best of any regular starter in the Premier League, while among players who have had some semblance of consistency in featuring in the starting eleven for their respective clubs, only Olivier Giroud marginally edges him.

Among the English goalscorers in the Premier League, Vardy’s goals per game rate bettered only by Andy Carroll, the West Ham striker who has so far seen only 69 minutes of action on the pitch and notched one goal, and Sunderland’s Duncan Watmore, who has been on the pitch for even lesser. Among regulars, Bournemouth’s Callum Wilson and Liverpool’s Daniel Sturridge have worse averages than Vardy.

And dispelling another misconception of Vardy’s prolificity arising out of luck and chance is the following data on the number of shots taken by players this season. Vardy, like all good strikers with a great hunger for goals, has attempted the second highest number of shots this season. He trails Southampton’s Graziano Pelle, but his total shots on target this season is the highest in the division.

Ten goals from 31 shots roughly equates to one from three, which is a phenomenal conversion rate by a Leicester player’s standards, better than the likes of Aguero, Alexis Sanchez and Harry Kane. While 2/3rds of Pelle’s attempts tend to miss the target, almost the same amount hits the target for Vardy. No surprise he has scored five more goals than the Southampton man.

Vardy has scored most of his open play goals from sharp counter-attacking moves, using his pace on the break to catch opposition defences unawares. Earlier this month, we ran a column on the fastest players in the Premier League this season with Vardy predictably leading, and the status quo hasn’t changed at all with Vardy reaching a greater top speed than any of his peers plying their trade in the top flight. 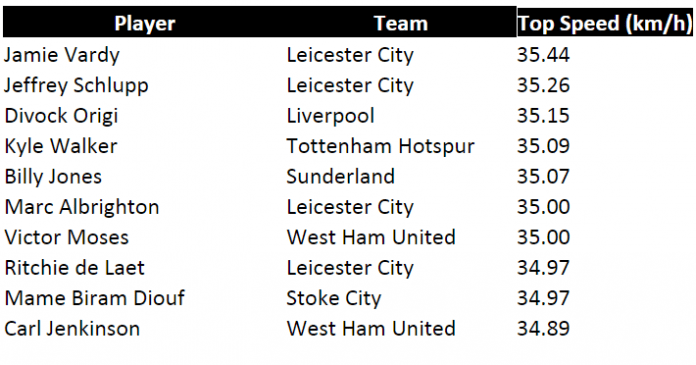 With his pace, eye for a goal and a scoring rate currently better than the likes of Robert Lewandowski and Cristiano Ronaldo, it is safe to assume that Vardy is currently leading the way in the Premier League’s striking stakes. There may be better all-round players in the Premier League like Aguero and Kane, but it is Vardy who has started the season like a train and has made a team of Leicester’s ilk eminently watchable.