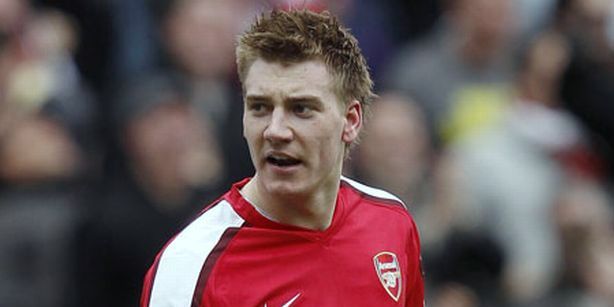 Arsenal fans, who thought that they might have finally seen the back of Nicklas Bendtner this summer, will be extremely disappointed with the situation that has unfolded, as it seems like the towering Dane is set to stay for another season, until his contract expires next year.

The 25-year-old insisted last month that he has had three to four offers to choose from, as finally realism has struck him that he is no longer wanted at the Emirates.

But, in reality, what we saw is only Bundesliga outfit Eintracht Frankfurt showed genuine interest in him, presenting him a life-line to resurrect his free-falling career.

After intense negotiations between both the clubs, it was revealed that the Denmark international is on the verge of finalizing the deal, putting an end to his plagued Arsenal career.

“On the initiative of the Danish player Nicklas Bendtner and his advisors, final talks have been held today on Tuesday 9, 2013 in Frankfurt between the striker and Eintracht Frankfurt,” a club statement read.

“Sports director Bruno Hubner is in close contact with Arsenal manager Arsene Wenger, and the final decision regarding Bendtner should be taken in the next two days.”

The striker travelled to the Commerzbank-Arena to discuss personal terms, however the deal collapsed, because of his personal demands, which were too high for the German club to agree to.

“After weighing up all the arguments, Bendtner turned out not to be a realistic prospect,” said Chairman Heribert Bruchhagen.

“Now it’s up to us. There are no problems with Arsenal. We have to see if it’s financially viable.”

Crux of the matter is Bendtner’s wage demands are too high for his own standard. And if, anyone is responsible for his current mess, then it is him.

There was certainly no dearth of talent in him. Had that been the case, he probably wouldn’t have come to Arsenal at first place, that too at the age of 16. Further, he shouldn’t have played all the levels for his country, before making the senior grade, where he made 55 appearances till date, scoring 22 goals.

After enjoying a successful loan period with Birmingham City, he spent four seasons at the club, making bit-part appearances, though he notched up 22 goals in 98 Premier League matches.

Wenger’s immense faith in him meant that he was sent out on loan, rather than being sold. Despite his brilliant start at the Stadium of Light (8 goals and 5 assists in 28 league appearances), he couldn’t make a lasting impression.

Unsurprisingly, Bendtner spent the last season on loan again, this time to Juventus. It was a golden opportunity for him to shine at a bigger club and get his career back on track, but he failed to score a single goal in 11 appearances for the Serie A champions.

In such a scenario, any young player, who has an ambition to establish himself as a football star, would clutch on to any good club of any top league to regain what has been lost.

Money sometimes comes secondary. For any ambitious footballer, playing regular games holds the first priority, which is probably not the case with Bendtner, who is clearly an exception.

It is understood that Bendtner earns £50,000 per week ($75,420) at Arsenal and although we don’t know what terms he was being offered by Frankfurt, it is almost certain that they would not match the salary he earns now, and rightly so.

Why would any club want to pay such astronomical salaries when they have to search the history books to find out when was the last time he actually scored a goal?

Still, it was an opportunity for him to grab what-ever-offer was on the table; silence the critics and go on to earn better rewards with stronger performances later on.

But, he feels that he deserves a wage package almost double of what Luis Suarez was on when he came from Ajax, a truly world class forward playing at his peak. Of course, it doesn’t come as surprising from a player, who once claimed that he is one of the best in the world.

“There is a price to pay as well for us players” Bendtner said in 2011. “Personally, I think I pay a big price with my body, my time and with never being able to have privacy when I am out and around other people.”

Probably the deal will reach an impasse on the negotiations. Bendtner is the worst sufferer here, but does he really care.

Arsenal financially might have been in their best shape for the first time in many years but the club would definitely look to accommodate the new recruits by shipping the unwanted players out of the club.

As it stands, the Gunners will try to find out another buyer who can take him on loan, as he doesn’t have any role to play for Arsenal ever again. However, in order for them to succeed, they would have to convince Bendtner of the fact that he is at a stage in his career where he would be foolish to choose money over football.

ItalianWikipedia: Italian may refer to anything of, from, or related to the country of Italy. →