Sportslens.com
Home Teams Croatia Who Should Start for England against Croatia?

So with Israel being the toast of England presently, not to mention the Macedonians doing us a favour as well, attention has now turned to the all important decider against Croatia on Wednesday night. England stand just 90 minutes and 1 crucial point away from remarkably qualifying for Euro 2008 when just last month English fans were beginning to ponder what would occupy them during next summer’s competition.

After Michael Owen’s thigh injury ruled him out of the final game against Croatia, and Wayne Rooney already out a decision has to be made on who should start the most important game of England’s qualifiers, who should partner England’s third choice striker Peter Crouch? Who should be in the starting line up?

With Scott Carson playing against Austria on Friday and keeping a clean sheet, and first choice Paul Robinson making some howlers to forget this campaign (not to mention the one against Croatia) Steve McClaren has not confirmed yet who will be playing in goal. Who is he fooling? We know he’ll start with Robinson as Carson hasn’t made a home debut for England yet, and I don’t think he’s going to make it in one of the most important England matches. The back four looks shaky to me. With Ferdinand suspended, Terry and Gary Neville out and Cole only just returning from injury, a complete makeshift defence will start. 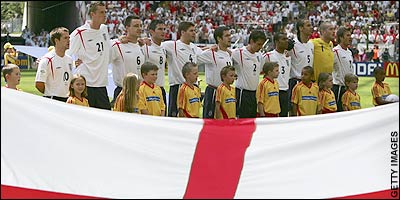 I don’t think McClaren will change his defence from that that played in Vienna. Campbell will have to the rock of the defence and bring his experience to the young defenders alongside him, most notably I think Joleon Lescott who will have to control the nerves. Micah Richards has made that right-back position his own and I don’t think Neville will be regaining it. If he does then McClaren is more of a fool than we think! Wayne Bridge will keep his left-back slot as the inexperienced Nicky Shorey will remain on the bench. The only other option for the position maybe is Phil Neville.

Bring back Wright-Phillips! I can only assume that he was kept on the bench the whole friendly against Austria to keep him ready for the Croatia game. He brings pace and skill to the team that David Beckham can’t. Beckham brings crosses, Wright-Phillips brings penetrating runs and dangerous through balls. Plus he links up with Richards so well. Joe Cole will remain on the left as we expect and Steven Gerrard will remain in the centre of midfield. Alongside him I feel should be Gareth Barry. The pair of them match. Barry is solid, has a great touch, passes really well and tracks back to help the defence — something Frank Lampard doesn’t do.

It’s just the sheer simple fact that Barry is left footed and Gerrard is right, the positions suit them to a tee. They understand each others game too as they have a good friendship off the field. Let’s be real now, Gerrard and Lampard are England’s two strongest midfielder’s but they simply can’t play together. In a starting line up I know who I prefer. Gerrard is an engine that never stops running. For me he holds the key on Wednesday night. However, I’m not completely banishing Lampard to the bench for the game. I think he should play just behind Crouch. He can score goals, we see them every week for Chelsea. OK so he’s never really replicated his performances for England but in this position with a free role, I think it would do him well.

With Owen and Rooney missing England will be relying heavily on Crouch for goals. If he had Jermaine Defoe or Alan Smith up with him, we’d struggle. With Lampard behind him getting those killer through balls in or even unleashing those powerful strikes from distance I think Crouch would benefit and could easily latch onto rebounds. Defoe and Smith have never really fitted in to the England squad, which Barry has done recently. Why spoil something good? Leave him there to help the defence and get the ball forward and play Lampard too in a position that I feel would help him and the team.