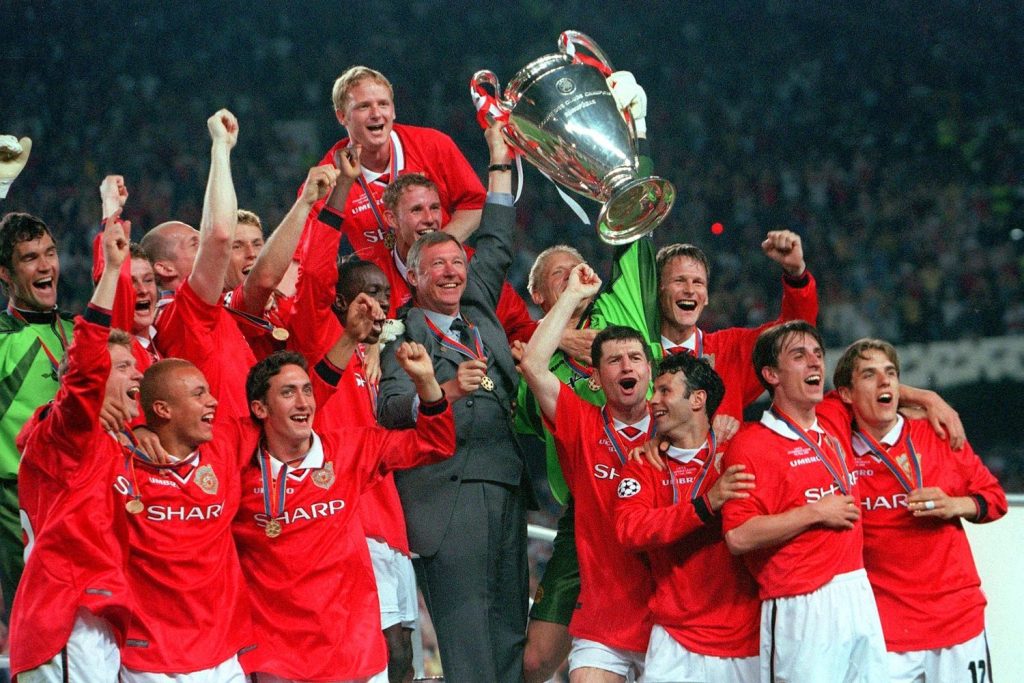 Manchester United and Arsenal—two of English football’s biggest teams—take on each other in the Premier League this Saturday. Ahead of the weekend’s game, we dive into both teams’ histories, with a look back at their most glorious times.

In 1999, United became the first English club to win the treble of Premier League, Champions League, and FA Cup, a feat that hasn’t been repeated by an English club since. It is widely regarded as Sir Alex Ferguson’s greatest accomplishment at United, despite the glut of silverware the Scot won in his time at Old Trafford.

Arsène Wenger’s Arsenal, too, reached their zenith when they went an entire season unbeaten in 2003/04. Although the Gunners had only the Premier League trophy to show for their “invincible” season, the fact such an achievement has proved to be beyond other teams is proof of its enormity. It is still the glorious peak of Wenger’s 20-year reign at Arsenal.

While Manchester United supporters regard the 1998/99 treble winners as the greatest club side in English football, people who champion Arsenal tend to look at the Gunners’ 2003/04 vintage as the best English football has witnessed. Ahead of the 224th United-Arsenal game, we weigh the two history-making teams to find out who really was the greatest.

United’s three trophies in 1998/99 clearly mark them out as better than Arsenal’s Invincibles of 2003/04, who won just the one Premier League trophy.

In the 2004 Ballon d’Or, Arsenal’s Thierry Henry finished fourth behind Andriy Shevchenko, Deco and Ronaldinho, and only two of his Arsenal team-mates—Patrick Vieira and José Antonio Reyes—made it into the final nominations.

Whereas, United did not have a clean sweep at all in 1998/99. Only Yorke was able to land the Premier League Player of the Season after his team’s historic treble.

Although Arsenal had an edge in the local awards’ stakes, United’s European success saw them having more representatives in the global scene. No clear advantage for either team.

It is not easy to compare events from two different seasons, with all the differences in quality of opponents, as well as the prevailing circumstances.

Meanwhile, Arsenal’s unbeaten league season of 2003/04 was almost unprecedented in the modern era. The last English club to achieve such a feat was Preston North End in 1888/89. With new competition emerging in the form of Roman Abramovich-owned Chelsea, Wenger’s Arsenal, too, had their share of difficulties in 2003/04.

The criteria to objectively assess the difficulty level of both teams’ successes is to look at other teams who have gone to achieve similar levels of success since.

In the elite level, only Juventus have been able to replicate Arsenal’s invincibility en route to their scudetto win in 2011/12. That shows how difficult it is for clubs at the very top level to go through an entire league campaign unbeaten.

United were the first English club to win the treble, but with the advent of more money and mega clubs, treble wins have become increasingly common. Barcelona did it twice in 2009 and 2015, current United manager José Mourinho led Inter Milan to a treble in 2010, and Jupp Heynckes’ Bayern Munich also cloned United’s treble feat in 2013.

Judging by their respective achievements’ repeatability, it seems that Arsenal’s Invincibles accomplished a more difficult job of going through an entire league campaign unbeaten than United’s 1998/99 treble winners.

The Invincibles dropped a few points along the way in their bid to keep their unbeaten run intact, but United’s sense of drama on the way to their treble win provided greater entertainment.

While United won the 1998/99 Champions League final in stoppage time in dramatic fashion, Arsenal drew five of their last ten league games in 2003/04 to trudge past the finish line. A pragmatic approach stemming from a desire to achieve an unlikely feat pervaded Arsenal in the final few weeks of their unbeaten campaign.

While it isn’t convenient to objectively judge two of the greatest teams in English football history, United’s treble winners had an edge over Arsenal’s Invincibles going by the above criteria. It is never fair to compare two different teams from different eras, but United’s 1998/99 vintage can just about be termed greater than the unbeaten Gunners of 2003/04.