A top half clash completes gameweek #24 as Manchester United travel to West Ham on Sunday.

Seven points separate these two at the start of the weekend with the home side winning just one of their last six in the league compared to United winning their last two.

Manchester United were 2-1 winners at Old Trafford when these two met back in September; it was only Louis van Gaal’s second Premier League win in his sixth attempt.

Sam Allardyce still has a lot of concerns in defence. James Tomkins missed the defeat at Liverpool and remains a doubt for this game. Winston Reid played that game but is a slight doubt for this one with a hamstring strain. James Collins is in the same position and was substituted in the final 18 minutes last weekend because of it, meaning West Ham’s first three choices at centre-back aren’t 100%. Carl Jenkinson could also miss his second Premier League game in a row.

Cheikhou Kouyaté could be back in line to make his return having been out with an injury since New Year’s Day.

Only Michael Carrick is unavailable to Louis van Gaal after Ashley Young made his return in the FA Cup replay against Cambridge on Tuesday night.

The Dutch manager hasn’t had this luxury very often at all in his first season at Old Trafford. 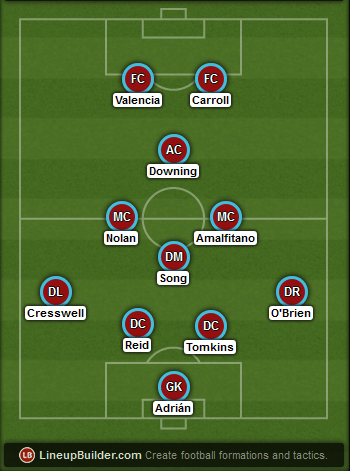 This back four could change depending on fitness and availability. Mark Noble is also an option in midfield if fit. The front two have been Sam Allardyce’s preferred strikers since Diafra Sakho picked up an injury to end his great start to the season. 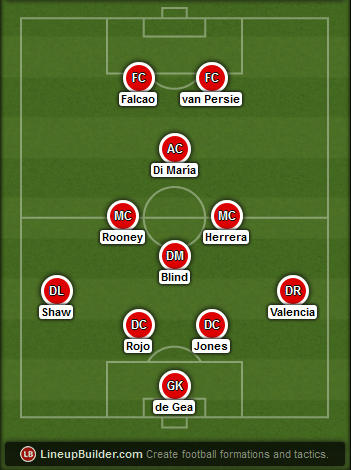 Loius van Gaal has been playing a back four of late. Antonio Valencia is preferred at right-back, Daley Blind has moved back into holding midfield following the injury to Michael Carrick. Two up front means we should see Radamel Falcao partner Robin van Persie, with Ángel Di María just behind.

Robin van Persie vs Winston Reid
The Manchester United striker opened the scoring in their 3-1 victory over Leicester City last weekend and remains a key threat. The Dutch striker’s movement in behind defenders is excellent for the likes of Ander Herrera, Wayne Rooney and Di María to play through balls. However, we expect the West Ham back four to play quiet deep so look for van Persie’s chances to come around the edge of the penalty area and from crosses in this match.

Ángel Di María vs Alex Song
Still not refound his form from earlier in the season and certainly not from his last few months in Madrid, but Ángel Di María offers a great attacking threat in this game. Alex Song is not the best positionally so look for the Argentine to find space in which to both shoot or set up chances for his teammates. The central attacking role is key for Manchester United in this game as a result of whom they are up again, so either the Argentine, Juan Mata or Rooney would be suitable for van Gaal to execute a victory around them.

Stewart Downing vs Daley Blind
Stewart Downing has been excellent for West Ham this season. Involved in a dozen goals (5 goals, 7 assists) in 22 games he poses a threat to the United defence in both open play, the counter attack and set pieces. Daley Blind isn’t the quickest of players so certainly has his work cut out against the England international.

Prediction: West Ham 1-2 Manchester United
Manchester United managed to beat West Ham earlier in the season when they were playing poorly and dogged by injuries. Now they have found their form we think they will come away with three points from Upton Park on Sunday to keep them in the UEFA Champions League places. The Red Devils appear to have too much attacking prowess on paper for a West Ham side that were comfortably beat at Liverpool last weekend.