Manchester United are fourth in the Premier League table and are just two points off the top. However their style of play has come under intense scrutiny off late.

Here at Soccerlens we look at some alarming stats that reveal United’s boring brand of football under Louis Van Gaal.

Granted that Manchester United have improved on their league standings under the Dutchman, but it must be frustrating to watch United’s cautious approach in every game especially when you are used to the free flowing attacking football under Sir Alex for decades. 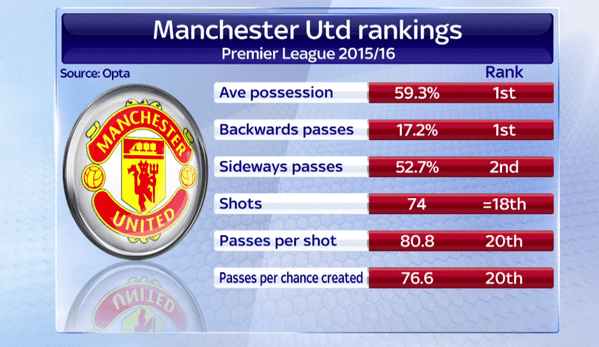 These stats collated by Sky Sports show that Manchester United are cautious, negative and one of the least adventurous sides in the Premier League.

The high average possession percentage and the lowest passes per chance created stats show that Van Gaal’s team like to keep the ball for longer periods without doing anything meaningful with it.

Furthermore, Manchester United are also ranked bottom in terms of passes per shot. This could indicate a number of things. Maybe the players are less confident about taking shots, or they are specifically instructed to pass the ball around for defensive solidarity, until a clear cut chance has been created.

Also, Manchester United have passed the ball sideways or backwards most of the time (69.9%) despite having some of the most creative and attacking players in the league (Rooney, Martial, Depay, Herrera and Mata).

In football, as long as you are getting results there are no concerns. However it would be interesting to know what Manchester United fans think of Louis Van Gaal’s country truck driving music.

Manchester United fans, do you think he can deliver the title playing the most boring brand of football? let us know in the comments below.