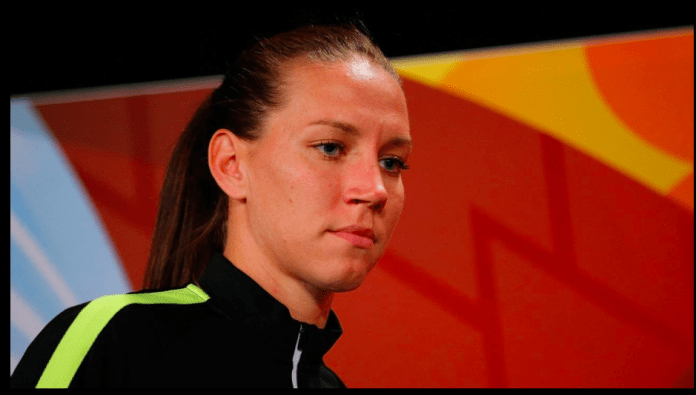 28-year-old Lauren Holiday is a midfielder who retired from the US soccer team in 2015. She is a two-time Olympic gold medalist and FIFA Women’s World Cup champion. One would think that her sparkling CV would be enough to get her respect during a particularly tough time in her life.

Holiday has unfortunately been diagnosed with a brain tumour while eight months pregnant. This is excruciating news, but what is worse is when you read news stories about how Lauren’s illness will affect her husband, Jrue Holiday’s upcoming basketball season. Jrue is an NBA point guard for the New Orleans Pelicans.

It is ridiculous that a woman who won two Olympic golds, and a World Cup in which she scored in the final, is defined by her husband’s actions. It is even more worrying to see the same happening during such a tough time for the player.

Jrue Holiday will miss start of the season to care for pregnant wife, who has a brain tumor https://t.co/8omMqnWkmV pic.twitter.com/2CbrrqcubE

Above is the troublesome tweet put out by Bleacher Report who didn’t even mention Laura’s name, simply referring to her as Jrue Holiday’s wife. With all due respect, this woman is not an unknown figure; she is a noted sportswoman.  She is a World Cup and Olympic winner. Frankly, her achievements overshadow her husband’s. But clearly, that isn’t enough for her to be an individual, and neither is being in such a critical position in her life, where she has to suffer from a brain tumour during pregnancy.

Bleacher’s Report were of course not alone in doing the same. Multiple huge media outlets, sports or otherwise, failed even to mention Lauren Holiday’s name.

Jrue Holiday to take time off to care for pregnant wife with brain tumorhttps://t.co/lvpPoaRR4c

Jrue Holiday takes leave of absence from NBA to help pregnant wife who was diagnosed with brain tumor: https://t.co/WJitf2R7i6

Jrue Holiday will miss an undetermined amount of time to start the 2016-17 season, as he cares for his ill wife. https://t.co/faSVKRBLEY

Considering how the media faced backlash for their sexist commentary at the recently concluded Olympics, people had hoped better sense had prevailed, and they had learned their lesson.

When Hungarian swimmer Katinka Hosszu smashed the world record in the 400m individual medley, NBC commentators decided to credit husband and coach Shane Tusup with her performance. Of course, the coach plays an incredibly crucial part in an athlete’s performance, but to describe him as “the man responsible” for her achievement is erroneous.

Meanwhile, Chicago Tribune decided to completely overshadow Corey Cogdell-Unrein’s Olympic bronze medal in trap shooting by describing her in both as “wife of Bears lineman Mitch Unrein” in both the headline, as well as the story itself.

Some journalists, worryingly some sports journalists as well, have become too accustomed to relegating women to the position of WAG (popular abbreviation for “wives and girlfriends”), that they seem incapable of discussing her achievements without framing her as “someone’s wife”.

There is no doubt that the couple has much bigger things to focus on than what is going around in the media. However, there is also little doubt that multiple media outlets are treating this story in a  condemnable fashion, and rightfully, they should acknowledge their mistake.

Hopefully, as the NBA season kicks on, they will at least have the decency not to treat the Holiday’s struggles as a sub-plot to the upcoming NBA season. Jrue told a reporter at New Orleans’ Times-Picayune that “my family comes before basketball… My wife is the most important thing in the world to me. She comes before anything else.”

Hopefully, sexist sports writers read his words carefully before drafting an ill-worded and hurtful article, or a 140 character long tweet.