Group G’s top two teams fought it out in Recife, hammered by torrential rain, with Germany ending victorious thanks to another Thomas Muller goal. The downpours caused massive flooding in the area, but the game went ahead as planned, and the passion witnessed by both sides will have silenced any doubters, who thought this would be played out as a conspired draw. 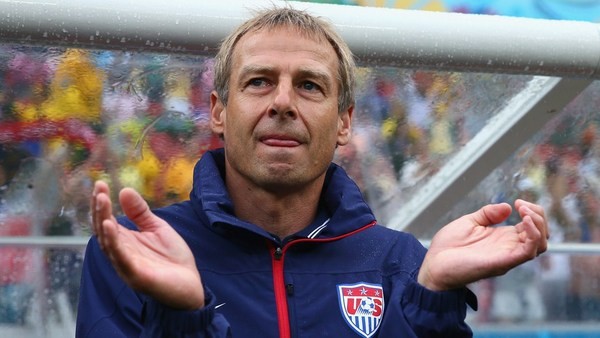 German national, Jurgen Klinsmann, made a few changes to his starting USA team to face his home nation; bringing in Brad Davis to replace Bedoya, who was unconvincing on the left wing against Portugal, and Cameron being replaced at the back by Omar Gonzalez.

The Americans were given an absolutely torrid time right from the start, Germany going all out for the win as predicted, and Gonzalez justified his manager’s confidence in him on more than one occasion with excellently timed challenges. Tim Howard also had to be on top of his game and even in the wet conditions he pulled off some great commanding work between his sticks. He couldn’t be held accountable for the one that got past him.

USA weren’t going down without a fight though and gave as good as they could against the German powerhouses. A break forward on the 21st minute almost saw the US take a shock lead, when Jermaine Jones stormed through the midfield, all the way from winning the ball in front of his own box, and 5 players linked up swimmingly, resulting in a good shot from Zusi, over on the left after a switch with Davis, that sailed just over the crossbar.

Germany brought on Miroslav Klose at half-time, the man who currently is level with Ronaldo as the highest goal scorer at  World Cup finals. The lethal hit-man gave them a renewed focus and confidence in front of goal and began putting Tim Howard under even more pressure. 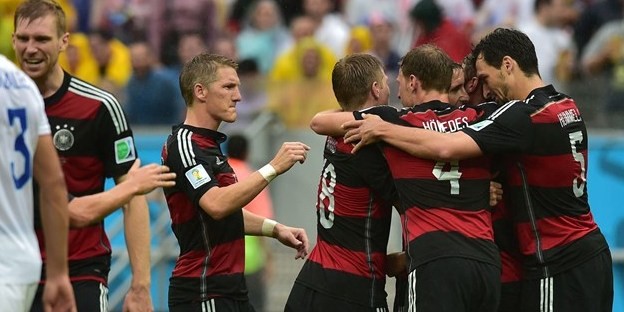 Mertesacker fired in a header on the 55th minute that Howard did well to block but his save cruelly rebounded right to the feet of, none other than, Thomas Muller. The Bayern Munich striker fired it back at Howard who was unable to keep it out.

Over in Brasilia, the Portuguese and Ghanaians were level at 1-1, which would see USA still qualify… then, with 10 minutes remaining, Cristiano Ronaldo did USA a favor by giving Portugal the lead. Ghana winning would’ve made things very shaky for the Stars And Stripes but the Mediterranean nation would need to go on a scoring streak to make up the ground required to qualify. It wasn’t to be, as no more goals were scored in either game.

USA even gave the Germans a couple big scares in stoppage time, firstly with substitute Bedoya striking into the bottom corner with precision, but Lahm ran half the length of the pitch to get an essential block in. From the resulting throw-in, Bradley put a cross in and Dempsey came close to heading home an equalizer, ending up just over.

Massive credit to the United States for getting through against the odds, ahead of Portugal and Ghana. Germany were rightful winners on the day, and for the Group, but USA did themselves and their fans proud with the performances and results they’ve achieved so far in Brazil.

How much further can Klinsmann take the US?