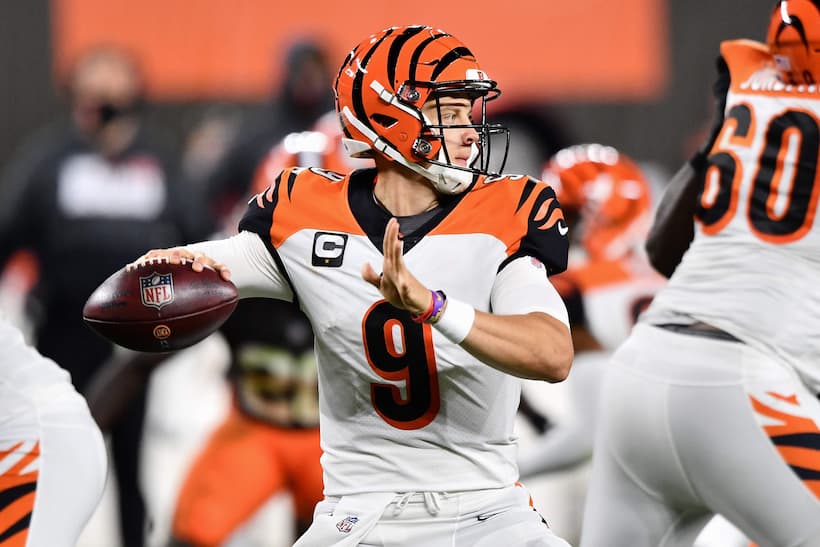 To get you ready for another fantastic lineup of NFL games this Sunday, our football betting expert presents the best NFL Picks for Week-8 and details how every Sportslens reader can claim up to a $1,000 welcome bonus at Bovada.

Rookie QB Zach Wilson limped off with a knee sprain as Jets were thumped 54-13 by Patriots last weekend. Robert Saleh’s team played poorly – very poorly. The running game was totally ineffectual. QB2 Mike White threw two picks, prompting Jets to bring Joe Flacco back to NY/NJ; no receiver tallied over 70-yards, and, worst of all, the Jets’ usually stern enough defense was turned over by – let’s be real – a second-rate offensive unit at best. The Jets are now deservedly bottom of the AFC East with a 1-6 record.

Earlier that day, however, the Cincinnati Bengals, with Joe Burrow looking like a young Tom Brady and Ja’Marr Chase mirroring a young Randy Moss, trounced the Ravens 41-17, leapfrogging them into first place in the AFC North.

Traditionally, it would make sense to bet against Cincinnati after a big win like last weekend’s; the Bengals have been the epitome of inconsistency for as long as most of us have watched the game. But, this team, across the board, just feels different, and we’re backing them!

Bet on Bengals to win and cover the -10.0 spread at Bovada

Miami has been poor this season, most recently following up a tough loss in London to the Jaguars (Jacksonville’s first and only win of the year) with another defeat vs Falcons last week, 28-30. Miami has not won a game of football since the opening day when they defeated the Patriots, and, given football is a results business, head coach Brian Flores must be looking over his shoulder.

The Bills are a totally different proposition to any other team Miami has faced this season. In fact, Buffalo, despite losing to Tennessee last time out, is still the consensus-agreed best team in the NFL this year. The defense ranks top or near the top for rushing yards against (6th in NFL with 89.7 YPG), passing yards against (1st in NFL with 180.5-yards per game), and has already pitched two shutouts this season vs the Texans and, you guessed it, the Dolphins (35-0).

We don’t see any way to the crib for Miami in this one.

Having spent a Week-7-BYE resting up from the big, 34-6 trouncing the Ravens handed out, L.A. return to Sunday afternoon football with a tough home game vs the Patriots. Despite the loss, the Chargers are still 4-2 and 2nd in the AFC West. Overall, it’s been a positive first eight weeks of football in L.A.

Brandon Staley’s offense just underperformed against a Ravens’ defense that piqued at the right time. We’re expecting some fresh ideas from the Chargers coach and a much-improved all-round performance from Justin Herbert and co. vs the Patriots.

By virtue of being better than below-par rosters in Miami and New York, the Patriots are 2nd in the AFC East despite having a losing 3-4 record. The Pats are still a Bill Belichick team, so the defense is still playing good football, and that 54-13 early-Thanksgiving stuffing Mac Jones and co. inflicted on the Jets last Sunday should provide what had been an underperforming offense with a world of confidence.

But, even so, we just don’t think this Pats team can keep pace with a rested Chargers team that’s so stacked full of game-winning talent. RB Austin Ekeler has 598-yards from scrimmage and five TDs; Mike Williams is reborn- he’s been one of the NFL’s best receivers to date, chalking up 498-yards and five TDs; Keenan Allen isn’t far behind on yards either, and Justin Herbert is on course to rack up something like 4,500-yards, 35 TDs with just 9 picks this year.

There will be some interesting matchups for sure. But, put simply, the Chargers have better players and have had an extra week to prepare, so we’re backing them to win and cover.

Bovada is offering a 50% welcome bonus that’s worth up to the total value of $1,000 for each newcomer to the sportsbook that signs up in time for NFL’s Week-8 fixtures.

To claim this offer in time for Sunday’s Week-8 NFL games, click the link below and follow the steps: