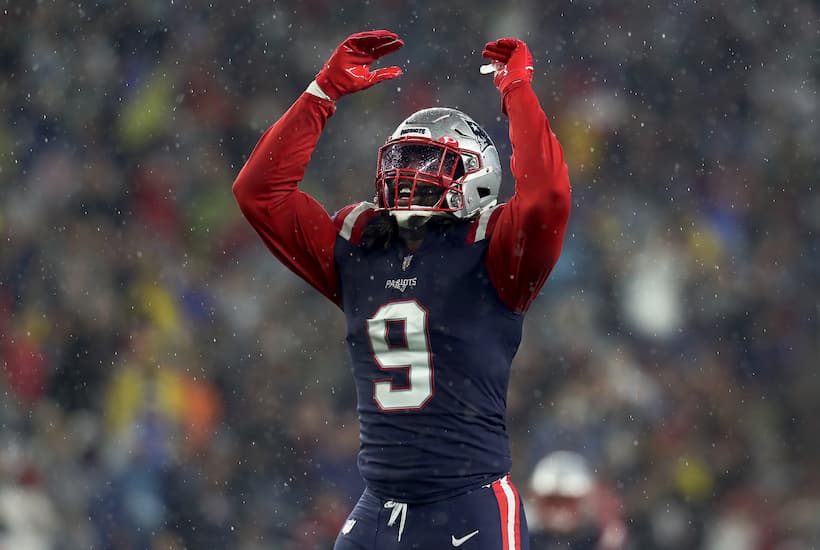 Get set for another top slate of Sunday afternoon football with our football betting expert’s NFL Week-10 Picks. Plus, discover how Sportslens readers can claim up to a $2,500 welcome bonus at BetUS.

Now at 5-4 in the AFC East, and having won three on the bounce, including a crushing 24-6 win vs Panthers last Sunday, it’s starting to feel like Bill Belichick’s New England Patriots are creeping back towards being a formidable team.

QB Mac Jones continues to impress and still looks like the most accomplished signal-caller of this year’s rookie class. The former Alabama man will no doubt be hoping to improve on his season tally of 10 TDs to seven interceptions going forward. But Jones is managing games well, and it’s not really the offense that has rival fans in the AFC East worried about the Patriots again all of a sudden anyways:

It’s the Patriots’ defense that’s proving so hard to unlock. The unit is above average defending both the air attack and the run; stingy when playing red zone defense, and ranks fourth in the NFL for points allowed per game, surrendering a measly 18.9 ppg.

Browns (5-4; AFC North) looked much-improved on both sides of the football in the 41-16 trouncing of the Bengals last week. But, coming to New England in mid-November to face off with Matthew Judon (9 sacks) and J.C. Jackson (5 picks) in the cold and the wet is likely to be an altogether tougher proposition.

Prediction: Pats defense holds firm. Patriots to cover the -2 spread is our NFL pick of the game

Atlanta Falcons wrecked our parlay last weekend when they held off a spirited comeback from arch-rivals New Orleans Saints to snatch a 27-25 win at the Superdome.

Veteran QB Matt Ryan finished the afternoon with 23/30 for 343-yards and two TDs and is clearly enjoying his new target in the backfield, Cordarrelle Patterson, who finished up with 126-yards receiving from just six catches.

Atlanta is now 4-4 in a tough NFC South division and riding a wave of confidence after winning three of the last four games played.

The Cowboys (6-2; NFC East) might be the clear and obvious favorites for the W here. But, after watching Dak Prescott and co. struggle offensively in the 30-16 defeat at the AT&T vs Broncos last Sunday, based on recent form and the standard of competition these two teams face week in week out in their respective divisions, the +10 spread just seems inflated to us.

The L.A. Chargers ended a two-game skid vs Pats and Ravens by defeating the Eagles 27-24 on the road last weekend, moving on to 5-3 on the year, and clinging onto top spot in the hyper-competitive AFC West.

Minnesota has had a less productive last week of football than their Californian opposition. First, there was the crushing comeback defeat inflicted on Mike Zimmer’s team by the Ravens last weekend. Then, there was all the news that broke midweek regarding the legal issues facing star RB Dalvin Cook. However, we’re still backing Minnesota to beat the spread here:

The Chargers boast the 3rd best-ranked NFL pass defense (197-passing yards against per game) but will go up against Vikings stars, QB Kirk Cousins, and wideouts Adam Thielen and Justin Jefferson this time out – the trio has combined for much of Minnesota’s NFL 10th ranked passing offense thus far this campaign (260-passing yards per game), and are notoriously tough to stop in the red zone.

Spearheaded by QB Justin Herbert and WRs Keenan Allen and Mike Williams, Chargers do boast a slightly better passing attack (ranked 5th in NFL with 282-yards per game), but Minnesota only allows 40-yards per game more airmail than their opponents, and it’s hard to separate the abilities of Dalvin Cook and Austin Ekeler in the Vikings and Chargers respective backfields, too – they’re both great.

In short, these are two evenly matched teams and we think they might just cancel each other out in this one.

Prediction: Chargers to eke out a win but Vikings to beat the +3 spread

NFL Week-10 Betting Tips: Get a $2,500 Deposit Bonus at BetUS ahead of this Sunday’s games

BetUS is offering a 125% first-time matched deposit bonus that’s worth up to $2,500 to anyone that signs up with the sportsbook before Sunday’s NFL Week-10 games. To claim your 125% deposit welcome bonus, just follow the simple steps below: