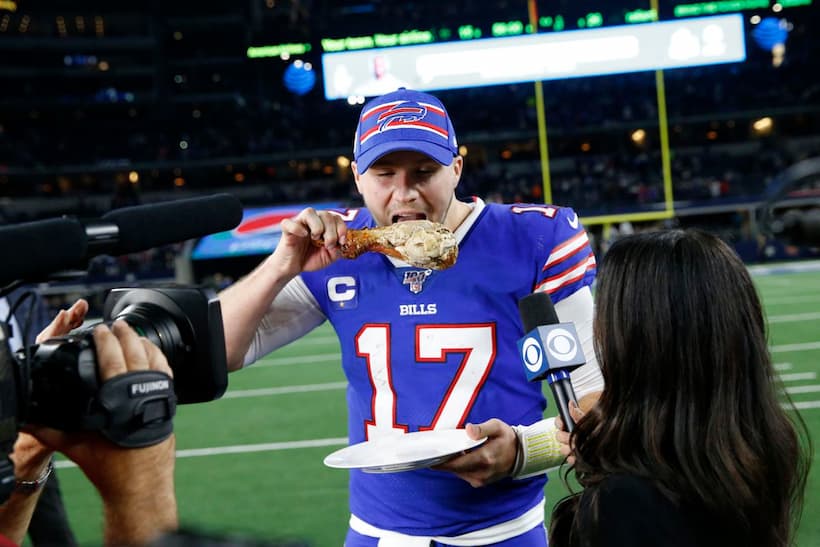 With a top lineup of Thanksgiving football set for tonight, our football betting expert presents the best Turkey Day Picks and details how Sportslens readers can claim up to a $2,500 welcome bonus at BetUS.

Sign Up at BetUS to receive up to a $2,500 deposit bonus to wager on tonight’s feast of Thanksgiving football: Saints vs Bills; Lions vs Bears, and Cowboys vs Raiders.

You can read our complete preview and predictions for the Thanksgiving fixture between the Saints and the Bills by clicking the following link – Saints vs Bills preview and Picks.

In a nutshell, however, after the news emerged yesterday that star RB Alvin Kamara will again miss out for the Saints tonight, adding to a long list of absent stars, it’s difficult to imagine an injury-ravaged New Orleans team that’s just lost three games in a row for the first time since 2016 getting a positive result against the Bills tonight.

Having lost to Jacksonville Jaguars and Indianapolis Colts in recent weeks, it’s not like the Bills are in top form either, mind. But, we’re backing QB Josh Allen and the NFL’s 5th ranked offense in terms of yards per game (392.2-YPG), and a defense that ranks 1st in the NFL for yards against (283.7 YPG) and 2nd in the NFL in turnover differential (+10) to get the job done at the Dome tonight.

Prediction: Bills to win and cover the -4.5 spread (-105) is our Thanksgiving Football Pick for the game.

You can read our complete preview and predictions for the Thanksgiving football fixture between the Lions and the Bears by clicking the following link – Lions vs Bears Preview and Thanksgiving Picks.

News broke yesterday evening that tonight’s Turkey Day clash with the Lions will be Bears head coach Matt Nagy’s last game in charge of Chicago. Nobody likes to see anyone fired on Thanksgiving, but it’s hard to defend Matt Nagy’s insipid Bears offense anymore, and the time is probably right for a change.

With all the commotion going on over in Chicago – plus the fact that WR Allen Robinson II will again miss out along with QB Justin Fields (ribs), the 0-9-1 Lions suddenly become a decent betting proposition, especially after the news broke yesterday that QB1 Jared Goff expects to play tonight.

The Lions have come so close to a win on numerous occasions this season, and we’re backing Dan Campbell’s team to finally get the monkey off its back tonight at the depleted Bears’ expense.

Prediction: Detroit Lions to beat the +3.5 spread is our Thanksgiving Football Pick for the game.

The Dallas Cowboys (7-3; NFC East) head into tonight’s game against the Las Vegas Raiders off the back of a defeat to Kansas City last Sunday.

With WR Amari Cooper missing the Chiefs game with COVID and then sophomore WR CeeDee Lamb leaving the game early with an injury, Cowboys QB Dak Prescott struggled to move the ball up the field with any regularity as his Dallas team failed to register a TD in a game for the first time this season.

Cooper is still on the COVID reserve list and won’t feature against the Raiders. Lamb (concussion) is currently listed as questionable to suit up, but Cowboys coach Mike McCarthy is hopeful about the Oklahoma product’s chances.

The Raiders aren’t faring any better than tonight’s opponents and the recent slide continued on Sunday. Without shamed-former coach Jon Gruden and WR Henry Ruggs who is currently under house arrest and awaiting trial, the Raiders have struggled offensively, especially on third-down. After getting beat 32-13 vs the Bengals on Sunday, QB Derek Carr and co. have now lost three games in a row.

It’s not just the lack of the Ruggs III’ deep threat that’s causing concern among Raiders fans, however. The Raiders D has struggled up against the run all season and ranks 29th in the NFL for rushing yards against, conceding 132.1 YPG, and Paul Guenther’s unit is also having big issues on third down. Bengals converted 8/16 third-down attempts on Sunday, and the previous week, Patrick Mahomes and the Kansas City converted on 9/15 third-down attempts.

When it comes to making a betting prediction for this game, even without Amari Cooper, it’s hard to look past a Cowboys offense that leads the NFL in yards per game (418.1 YPG), not to mention a defense that – thanks in no small part to CB Trevon Diggs’ eight picks – ranks 8th in the NFL for turnover differential (+4).

Prediction: Dallas to win and cover the -7.5 spread

NFL Week-11 Betting Tips: Get a $2,500 Deposit Bonus at BetUS ahead of this Sunday’s games

BetUS is offering a 125% first-time matched deposit bonus that’s worth up to $2,500 to anyone that signs up with the sportsbook in time for tonight’s slate of Thanksgiving football games: Saints vs Bills; Lions vs Bears, and Cowboys vs Raiders.