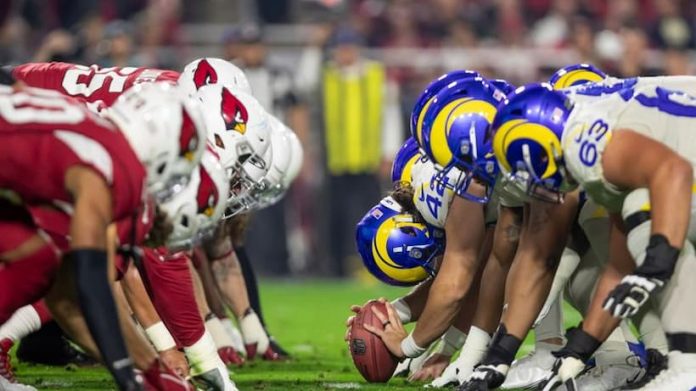 The Los Angeles Rams host the Arizona Cardinals in the final Wild Card Weekend Playoff clash tonight, and, if you’re looking for NFL Playoff Picks for the game, you’ve come to the right place. Plus, find out how to claim a lucrative $1,000 deposit bonus ahead of Wild Card Weekend at BetOnline.

Click here to get a $1,000 deposit bonus at BetOnline when you sign up to bet on Rams vs Cardinals

Will it be Matthew Stafford or Kyler Murray moving onto the Divisional Round? Find out tonight when the Los Angeles Rams face the Arizona Cardinals in the Wild Card Round of the NFL Playoffs.

We’ll be assessing that, plus all the latest odds as broadcast at BetOnline, a full game preview, the latest team news, and our football expert’s NFL Playoff Picks for the game below:

Below are the latest Rams vs Cardinals odds as seen on BetOnline on Monday, January 17.

Click here to bet these Rams vs Cardinals Odds at BetOnline

After closing out the regular season going 5-1, and beating the likes of the Seahawks, Ravens, Vikings, and tonight’s opponent, the Cardinals, -all good teams- en route to a 12-5 record, it’s a little surprising that the Rams appear to be sneaking under the radar at present.

Last week’s defeat to the 49ers, in which the Rams blew a 17 point lead is the likely cause. But, with little to play for, I, personally, wouldn’t read too much into that L.

The loss certainly doesn’t detract from the fact that the Rams ended the season as the NFL’s 5th ranked team for passing yards per game (273.1-YPG), or 8th in the league for points scored, averaging 27.1.

Both of these metrics are even more impressive when you consider that Stafford and co. did it without WR2 Robert Woods for half a season and likely RB1 Cam Akers for the entire year.

WR Cooper Kupp picked up most of the slack left by the absence of these players, registering 16 TDs and an astonishing 1,947-yards from 145 receptions, and helping new QB Matthew Stafford (4,886-yards; 41 TDs, 17 picks) to a fine first season in Rams’ blue and white in the process.

Kupp, an East Washington graduate, led the NFL in all three metrics. I barely even need to type that the Cardinals need be wary of Kupp at this point, to be honest. Everyone knows Stafford is going to throw him the ball. Yet nobody seems to be able to stop it, and credit to Kupp (and Stafford) for that; not to mention offensive coordinator, Sean Patrick Kuglar.

The Rams defense, now featuring both Aaron Donald (12.5 sacks) and Von Miller (5 sacks), and complemented by the excellent Leonard Floyd (9 sacks), led the lead in sacks (53) and forced 25 takeaways. At the line, McVay’s D is a difficult prospect for any offense and Donald and co. have done a great job of stuffing the run all season (103.2-YAPG; 6th in NFL).

However, things haven’t been quite so great in the secondary, and drop-back QBs have found success with the deep ball time and time again. So, if there is a path to victory for the Cardinals tonight, it’s surely there.

As for Arizona – after a fine 8-0 start to the season which included a dominant, 37-20, win vs the Rams, things started to go array for Kliff Kingsbury’s team when the likes of J.J. Watt, DeAndre Hopkins, and – for a few games – even Kyler Murray began missing matches through injury.

Hopkins and Watt never returned to aid the cause during the regular season, leading to Arizona going 1-4 on the run-in, a bad stretch that included defeats to the often woeful Detroit Lions and playoff bottlers, the Indianapolis Colts.

Still, there’s no doubting that Arizona is capable of causing L.A. problems tonight:

QB Kyler Murray is a generational talent. The Oklahoma product finished up with 3,787-yards, 24 TDs, plus a further 423-yards and 5 TDs on the ground. And that’s despite missing games with injury. Murray is a true dual-threat QB and, if he is on song, it’s a long afternoon for any defense.

In the absence of Hopkins, WR Christian Kirk found his feet towards the back end of the season. Kirk ended up posting 982-yards and 5 TDs. And keep an eye out too for the former Phillie TE Zach Ertz who appeared to enjoy a mini-renaissance after swapping the East coast for the West. Also, RB James Conner’s full-throttle, bruising running, though not the most productive, was one of the highlights of the year, in my opinion.

Without JJ Watt generating pressure at the line, the Cardinals defense did struggle. By the end of the year, it ranked just mid-tier defending both run and pass plays. But, even without the Texans-legend, Arizona still finished 4th in the league for turnover differential (+12), meaning the capability of making big, game-winning plays is there.

For my money, the Cardinals defense will need some of these big plays if the Arizona fans are to have cause for celebrations tonight. And, fortunately, it’s a metric that COULD be aided even further if J.J. Watt is passed fit come game-time tonight (see below).

The big news coming out of L.A. this week is that RB Cam Akers is back in training.  The Florida State product is expected to feature alongside Sony Michel in the Rams’ backfield.

On the injury front, however, coach Sean McVay has concerns over WR Van Jefferson (questionable) and S Taylor Rapp. The latter of whom definitely miss out after suffering a concussion vs 49ers.

For the Cardinals, DE J.J. Watt is traveling with the squad to L.A. after making a quicker than expected recovery from the shoulder injury that derailed his season. If Watt suits up, it will be a huge confidence boost for a defense that struggled to generate pressure in his absence.

A lot was made of the Rams’ unceremonious defeat to the 49ers last weekend. McVay’s boys blew a 17-0 head start. But, in truth, the Rams had already qualified for the playoffs. So, given the 12-5 record, they’ll know that they are capable of much better than we saw for 30mins of that game. One defeat doesn’t make L.A. a bad team.

Arizona, on the other hand, never really seemed to recover from losing QB Kyler Murray for a spell and DE J.J. Watt & WR DeAndre Hopkins for the season. Their end-of-season form was deeply concerning. You don’t see too many teams sneak into the playoffs after closing out the year 1-4; not in a division like the NFC West.

Without Hopkins and likely without (or with a semi-fit) Watt, I’m just not sure they have enough quality out there to carve through this Rams D or get enough pressure on Stafford.

As such, I’m expecting more of what we saw in the second meeting between these teams when said players were out and the Rams won out, 30-23.

Rams vs Cardinals Playoff Prediction: Rams win at home and cover the -3.5 spread (-110)

By signing up at BetOnline ahead of Rams vs Cardinals on Monday night, newcomers are entitled to receive up to $1,000 in NFL free bets.