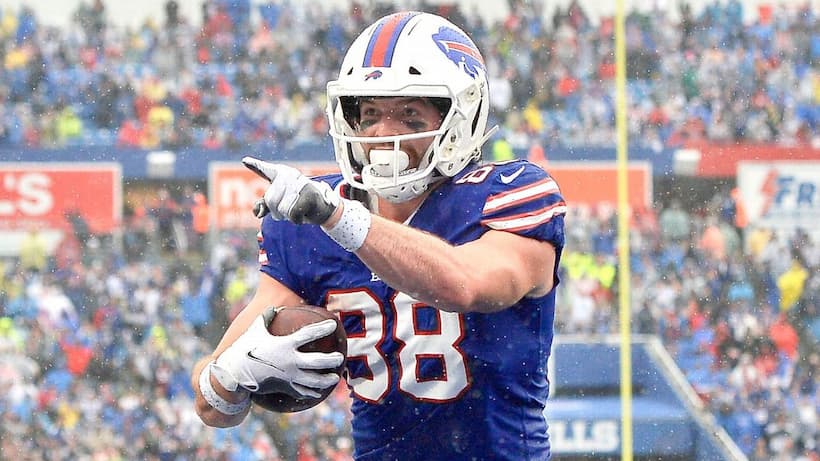 Our NFL Expert presents NFL Picks for tonight’s surefire, epic top-of-the-AFC-East-clash between the Buffalo Bills and the New England Patriots on Monday Night Football. Plus, find out how you can claim up to a $1,00 deposit bonus when you join the BetOnline sportsbook.

NFL fans can claim a $2,500 deposit bonus signing up to BetOnline to wager on Bills vs Patriots

Tonight’s MNF matchup sees a pivotal AFC encounter between Bill Belichick’s resurgent New England Patriots (8-4; AFC-East) and Sean McDermott’s heavily fancied Buffalo Bills (7-4; AFC-East). The winner of tonight’s game will take control of the division so, with gale-force winds and snow expected in Buffalo, get set for a real festive slobber knocker!
For a full Monday Night Football Preview, the latest odds, and free NFL picks and predictions for Bills vs Patriots, read on:

Below are the latest odds available across the main game lines for Buffalo Bills vs New England Patriots as broadcast on BetOnline on Monday, December 6.

Our betting Picks are highlighted in bold (odds subject to change).

Click here to bet on Patriots @ Bills at BetOnline

After winning six games in a row, Bill Belichick’s New England Patriots are the NFL’s form team and are the best-ranked AFC contender at 8-4.

Led by Rookie of the Year contender Mac Jones (2,850-yards, 16 TDs, 8 picks) at QB and the tough running combo of Rhamondre Stevenson and Damien Harris, the Pats offense has gelled and averages 35.1 points per game during the recent winning run. The receiving corps of WRs Kendrick Bourne, Jakobi Meyers, & Nelson Agholor, and TE Hunter Henry is also rapidly growing in reputation, and Belichick’s team is now capable of hurting an opposition in a variety of ways – the playbook is officially back open!

The New England defense, which was always going to be a tough out on paper when you ran through the roster towards the end of the offseason, has fared even better than expected. The former Raven, LB Matthew Judon has 11.5 sacks to his name; CB Jaycee Jackson has 7.5 interceptions; S Kyle Dugger has notched up 80 tackles, and, combined, the unit averages a measly 15.8 points against per game.

The Pats head into tonight’s contest with the Bills off the back of a shutout, 25-0, win over the Falcons and a team-defining 36-13 win vs Titans last week. But the Bills will fear nothing.

Sean McDermott’s team is at 7-4; got back to winning ways vs the Saints on Thanksgiving, and, on key, are as good as any team the NFL currently has to offer:

QB Josh Allen has already notched up 3,075-yards and 25 TDs to just the 10 picks, and his receiving corps of Stefon Diggs, Cole Beasley, Emmanuel Sanders, and a vastly-improved Dawson Knox at TE is one of the best units in the NFL. Combined with aggressive running from Allen and RBs Devin Singletary and Zach Moss, the Bills boast the NFL’s fourth-ranked offense in terms of yardage, averaging 389.3 YPG and the NFL’s second-ranked unit for points per game, averaging 29.6 PPG on the year.

Coupled with the fact that the Bills also lay claim to the league’s best run defense (96.6 YAPG) and the best defense overall for YAPG (275.2) and it’s easy to see why many pundits still make the Bills the favorites for the Superbowl despite a stop-start run of form in recent weeks.

With the weather expected to include snowstorms and/or heavy rain, and gale-force winds, this game could go down to the wire as the best team on the year (Bills) meets the best team on current form (Pats) for the right to top the AFC East.

The Bills lost probably their best defensive player Tre’Davious White to IR for the rest of the year last week and the CB’s absence is a huge loss for McDermott’s team as we enter the business end of the football season.

On top of that, Buffalo has injury concerns over FB Reggie Gillam and RG Cody Ford. Fellow RG Jon Feliciano, who was expected to return from IR last week, is also doubtful to suit up tonight.

For the Patriots, there are concerns along the offensive line with RT Trent Brown and C David Andrews both questionable to feature this evening. Kyle Dugger, who leads the team in tackles, will definitely miss out after he was placed on the COVID-reserve list – a huge loss for a crunch game.

DT Christian Barmore, LB Ronnie Perkins, and WR Gunnar Olszewski are the other big concerns for Bill Belichick, but the latest reports indicate that the trio are expected to feature this evening.

This AFC-East clash has all the credentials to be one of the games of the year in the NFL, making it compelling viewing but almost impossible to call.

That said, form is a crucial factor in any sport. The Patriots’ six-game winning streak proves they are bang in form; the Bills sputtering WLWLWL record shows they are absolutely not.

As such, we’re taking Belichick’s underdogs on the moneyline.

Prediction: Patriots slug out a win on the road

BetOnline is offering a 50% matched deposit bonus that’s worth up to $1,000 to anybody joining the sportsbook in time for the MNF clash between the Bills and the Pats.

There are also a host of other top deals available via the BetOnline promo codes found at the link.

To claim BetOnline’s 50% deposit welcome bonus when you sign up to bet on the NFL tonight, just follow the simple steps below: