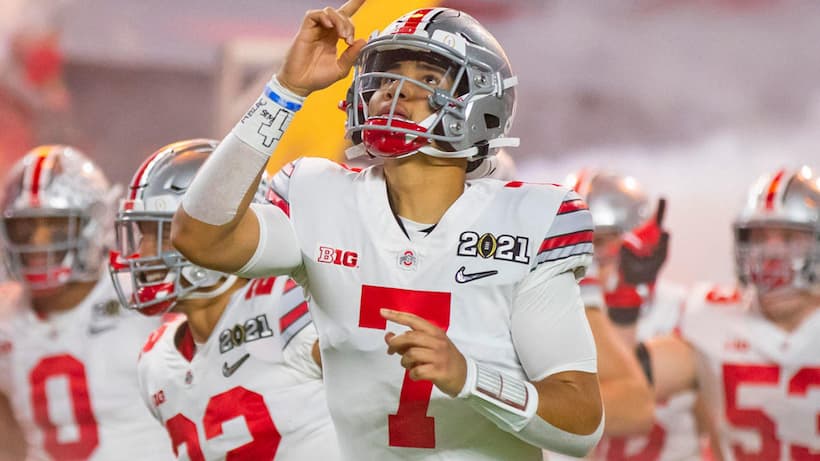 NCAA football returns tonight, and, with a top slate of games to look forward to over the weekend, our expert details the best NCAA Week-13 Picks. Plus, find out how you can claim a $2,500 welcome offer at BetUS.

Ohio State Buckeyes (10-1) have defeated Michigan Wolverines (10-1) in each of the last eight games, including big, double-digit victories in five of the last six, so it’s little wonder that Ryan Day’s team goes on the road as -8 favorites.

Led by QB and front-runner for the Heisman Award at the end of the year, C.J. Stroud, Ohio boasts the highest-scoring offense in the NCAAF. Stroud has already amassed 3,468-yards and 36 touchdowns this season and the freshman’s ability to locate WR Jaxon Smith-Njigba (1,132-yards & six TDs) in particular is likely to cause an impressive Wolverines coverage unit plenty of problems come Saturday afternoon.

Michigan is strong in is the pass rush and, led by the superb senior DE Aidan Hutchinson (nine sacks; 10.5 TFLs, & two forced fumbles), the Wolverines do a decent job of generating pressure at the line and getting to most opposition QBs. But most opposition QBs aren’t playing like Ohio QB C.J. Stroud! So long as Stroud can release the ball quickly and offensive coordinator Kevin Wilson gameplans creative schematics – RPOs, screens, etc., Ohio should be comfortable enough in the passing game.

Wolverines QB Cade McNamara is also having a very good year. He’s thrown for 2,142-yards, 14 TDs, and just the two picks to date. But the sophomore will need to find another level to dice up an improving Buckeyes secondary that, led by S Ronnie Hickman (83 tackles; two interceptions on the year), conceded just seven points to the now 9-2 Michigan Spartans last time out.

Prediction: Wolverines won’t go down easily but the Buckeyes have enough in the locker to win and cover the -8 spread.

After beginning the year as the epitome of inconsistency, the Boise State Broncos (7-4; 3rd in Mountain) have finally managed to string together a solid run of results, winning their last four games in succession and scoring 128 points to 46 conceded over that same span. QB Hank Bachmeier’s performances have really gone up a level of late, too: he’s thrown for eight TDs and just the one interception during this recent run.

It’s a good time for Leon Rice’s offense to hit form: San Diego State Aztecs (10-1; 1st Mountain West) have won three in a row, and, conceding just 4.6-yards per play on average this year, boast a top 10 defense in the NCAAF and need just one more win to clinch a spot in the Mountain West Championship game. Defensive coordinator Zach Arnett’s group excels at putting opposing offenses in third-and-long situations, so Broncos QB Bachmeier will need to keep a calm head and lean on the run game to eke out a result for the road team here.

Led by QB Lucas Johnson under center (993-yards; nine TDs, & four interceptions), San Diego doesn’t boast an elite offense, which is a bizarre thing to say given their league standing, but it is true – Aztecs tend to win the wars in the trenches and grind out results more than they blow teams away. This is evidenced by the fact that a lot of the unit’s wins this season have come in single-score games.

On current form, Boise State does have the ability to steal a big win on the road in San Diego later tonight (especially big if Navy does them a favor later on Saturday), but we’re leaning towards the Aztecs defense in this one.

Prediction: Aztecs to grind out a home win and beat the +3 spread in the process

Texas Tech (6-5; 6th in Big 12) got blown out 23-0 at home last weekend in a poor performance against Oklahoma State, making it three defeats in four for Sonny Cumbie’s team. The Red Raiders offense has run a committee approach all season and perhaps to its own detriment – there’s just no consistency in either the pass or run game in Texas.

Baylor, on the other hand, have won two straight games, allowing just 24 total points in that same span, and sit 3rd in Big 12. Had they not lost vs TCU a couple of weeks ago, Dave Aranda’s team would be right in the mix for an appearance in the finals.

Led by the electric Abram Smith (1,249-yards, 11 TDs, 6.8 YPC), the Bears boast an elite run-game that currently ranks 5th in the NCAA. Smith has chalked up +100 yard appearances in four of the Bears’ last five games and is likely to be a big problem for a good but not great set of Texas linebackers.

Texas can be good on their day but have lost by more than the -14 points listed on the spread on four occasions already this season and concede over 400-yards of total offense per game on average.

Up against the Bears’ excellent RB Abram Smith,  it could be another long night for an average-looking Red Raiders…

BetUS is offering a 125% first-time matched deposit bonus that’s worth up to $2,500 to anyone that signs up with the sportsbook in time for this week’s lineup of NCAAF Week-13 games.