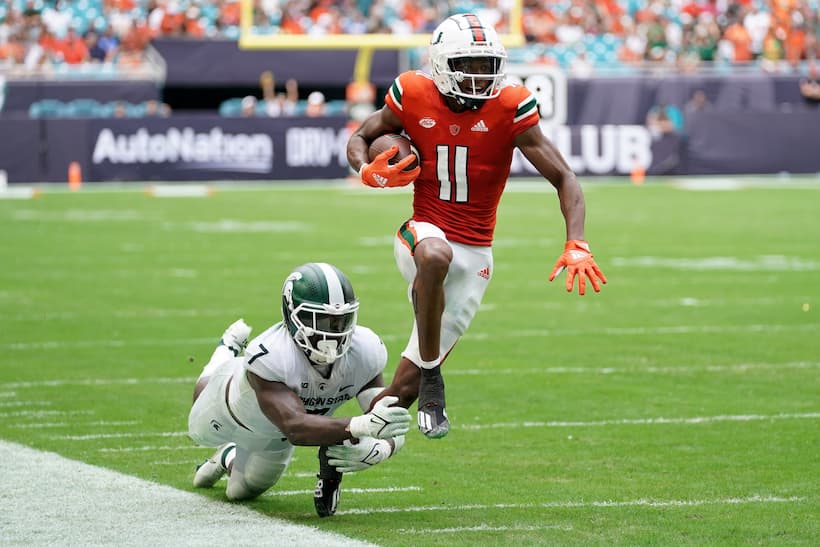 NCAA football gets back underway tonight, and, with a fantastic slate of games to look forward to over the weekend, our expert presents the best NCAAF Week-11 Picks. Plus, find out how you can claim a $2,500 welcome offer at BetUS.

The Miami Hurricanes meet Florida State Seminoles in Tallahassee this weekend. Miami has eked out three wins on the bounce against Georgia Tech, Pittsburgh, and NC State so should go on the road full of confidence.

Offensively, Miami has been in great form thus far this year, averaging 310-yards of airmail per game and putting up big numbers against the likes of Central CT St (69-0) and Pittsburgh (38-34). QB Tyler van Dyke has thrown for 1,877-yards, 15 TDs, and just the four picks to date, and his chemistry with WR Charleston Rambo (877-yards) is a tall order for any defense.

Florida State are in the midst of a two-game skid vs NC State and Clemson and have struggled to put points on the board in those defeats, scoring just 34 points total in the two games. The Seminoles defense has played well most of the year, conceding an average of just 27 points per game, which is decent considering how much time the unit spends out on the turf making up for the lackluster offense. However, coming up against a Miami pass attack that just went for 389-yards through the air, with 210-yards to WR Charleston Rambo alone, it could be a tough night for the Seminoles secondary.

Prediction: Hurricanes to win and cover the -2.5 spread

Ohio State Buckeyes are probably the most complete team in the NCAAF this year and sit in first place in the Big 10 East with a record 8-1. QB C.J. Stroud is staking his claim as a first-round pick at next year’s NFL Draft with 2,675-yards, 25 TDs to just the five picks, and surprise package wideout Jaxon Smith Njigba continues to excel on the flanks – he’s now registered 888-yards and 4 TDs on the year after going for an astonishing 240-yards vs Nebraska Cornhuskers last weekend.

It’s clear that Ohio is the favorite for this contest vs the Boilermakers. But, after they failed to cover last week vs Cornhuskers, we are slightly concerned about the huge 21 point spread on offer. Ohio has covered 21 point spreads in five of nine games played this season, but Purdue is a 6-3 team in the B10 West and, led by the excellent LB Jaylan Alexander (63 tackles), the Boilermakers are yet to be played off the turf by any side in the division.

As such, we’re backing the Buckeyes to win on the moneyline, but we’re less convinced they trounce Purdue than the oddsmakers are.

Prediction: Boilermakers to beat the +21 spread

Bet on Purdue Boilermakers to beat the +21.0 spread at BetUS

In a pivotal SEC West match-up, Texas A&M meet Ole Miss on Saturday evening. Texas A&M got off to a slow start this season, losing two of their first three games. But Jimbo Fisher’s team rebounded well and, since beating Alabama last month, have now won four on the bounce and boast a 7-2 record.

RB Isaiah Spiller has been in superb form. His 112-yard haul vs Tigers last week puts him at 873-yards and five rushing TDs for the year, at an average of 6.1-yards per carry. But Spiller might not even be the best RB on the Aggies’ roster: Spiller’s compatriot in the backfield, Devon Achane has 706-yards and averages 7.1-YPC. Ahead of arguably the NCAAF’s best RB pairing is a sturdy and aggressive OL that has a great propensity for opening up gaps, meaning Ole Miss linebackers could be in for a long afternoon.

As good as they have been offensively this season, Ole Miss Rebels head into the Aggies match off the back of a tough fixture list, including huge tests against the likes of Alabama, Arkansas, and Tennessee and it would be understandable if Lane Kiffin’s injury-riddled team plays slightly below par football on Saturday – which is why we’re backing the Aggies superb ground game to pay dividends against a good but not great Rebels’ defensive line.

BetUS is offering a 125% first-time matched deposit bonus that’s worth up to $2,500 to anyone that signs up with the sportsbook in time for this week’s main slate of NCAAF Week-11 games