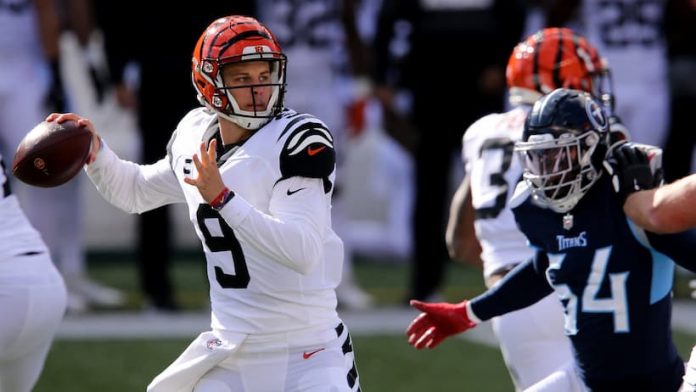 Tennessee Titans vs Cincinnati Bengals kicks off what’s sure to be a superb weekend of Divisional Round football, and our betting expert is on hand with free NFL Picks for the game. Plus, find out how to claim a lucrative $1,000 deposit bonus at BetOnline in time for Saturday.

Click here to get up to a $1,000 deposit bonus at BetOnline when you sign up to bet on Titans vs Bengals

The AFC’s No.1 ranked team gets ready to welcome arguably the NFL’s most exciting offense and AFC North champion when Tennesse Titans vs Cincinnati Bengals meet in the first game of the Divisional Round on Saturday.

To mark the occasion, we’ll be taking a look at the latest Titans vs Bengals odds at BetOnline, as well as serving up a full game preview, the latest team news, and our football expert’s NFL Playoff Picks for the game.

Below are the latest Tennessee Titans vs Cincinnati Bengals odds as seen on BetOnline on Thursday, January 20.

Our betting picks are in in bold font. Odds are subject to change.

If, instead, you’d rather read our NFL Divisional Round Picks for any of the other games slated for this weekend, or take a look at the plethora of free NFL bets available across US sportsbooks, click the links below:

During last week’s 26-19 W over Las Vegas Raiders in the Wild Card Round, it was once again the superb, near-telepathic link-up play between LSU alumni QB Joe Burrow and WR Ja’Marr Chase that got the job done for the 10-7 Cincinnati Bengals.

Burrow finished up the game with 244-yards, two TDs, and no picks, throwing mostly to Chase who caught nine passes for 116-yards and was a further menace on RPO plays, gaining 23-yards on the ground for good measure.

RB Joe Mixon didn’t have his best game for Cincinnati, averaging just 2.8-yards per carry, however, and will have his work cut out getting back to his dominant best against a Titans defensive line that ranked second in the NFL for rushing yards against, ceding just 84.6 YAPG on average.

Against the Raiders, the Bengals defense did a decent job of keeping the house in order on third downs as Carr and company struggled at 8/18 and especially in the first half when the Bengals D seemed dominant. The coverage unit also kept Carr at just about 50% pass completion, which is decent in the playoffs, and, as always, with DE Trey Hendrickson on the field, the Bengals pass rush accumulated three sacks.

Now, the Bengals will turn their attention to a Tennessee Titans unit that shocked a fair few of us by finishing first place in the AFC Conference.

In doing so, Tennessee skipped last week’s Wild Card round and have had extra time to rest and prepare for the home tie vs Cincinatti as a result. Not to mention extra time to get the Little Tractor, “King” Derrick Henry back in action.

Henry injured his foot in Week-9 of the regular season having already amassed 937-yards and 10 TDs. But reports suggest that the injury is responding well to full contact training. The former Alabama man will be in line for a return come Saturday.

Clearly the Titans dealt well without their star man on offense for the second half of the campaign. The RB committee approach worked a charm, and QB Ryan Tannehill, who spent so much of the year without dream receiving duo A.J. Brown and Julio Jones through injury too, found a way to eke out results.

But, with Brown, Jones, and now -likely- Henry back in the mix, it opens up the offensive playbook for Mike Vrabel, and the Titans (12-5) will be a tough out for any opposing defense as a result.

Still, as we all know, the playoffs often comes down to stylistic matchups and there is one area that the Bengals will be looking to exploit:

With Burrow slinging it to his receiving quartet of WRs Ja’Marr Chase, Tee Higgins, Tyler Boyd, and TE C.J. Uzomah, the Bengals offense ranked 7th in the NFL for passing yards per game during the regular season, and the unit looked just as capable vs Raiders last time out.

The Titans’ coverage unit, meanwhile, had it’s struggles against the deep ball this year, ranking 25th in the league, ceding 248.2-YAPG on average. So, this match up between the Tenessee secondary and the Bengals receivers is likely to prove pivotal.

Interested parties won’t know for sure until Friday, but Titans RB1/ the best back in the NFL, Derrick Henry, trained well on Tuesday & Wednesday and could be set for his first start in almost 10 weeks.

On the Titans defense, NT Teair Tart and CB Janoris Jenkins were limited participants in training this week. Both are questionable to feature on Sunday.

For the Bengals, backup WR Stanley Morgan is a slight concern for the offense but was never likely to feature prominently on downs.

A far bigger concern will be the fitness of 14 sack (+1 in playoffs) DE Trey Hendrickson who is dealing with a mild concussion. Reports do indicate, however, that the former Saint has trained well this week and should feature.

Not such good news for LB Germaine Pratt and DT Larry Ogunjobi, however. Pratt is still recovering from a bout of COVID-19. Ogunjobi is on IR for the remainder of the postseason with an as-yet-undisclosed injury.

This job gets increasingly tough during the playoffs. All the teams are excellent and each has its strengths.

But, we’re buying into this Cincinnati offense this year. The second half against the Raiders withstanding, Burrow and co. have been excellent all season-long. The Bengals offense has kept the chains moving with the pass all year. And, to be frank, we’re just not sure the Titans coverage unit will be able to cope with it.

We’re predicting that Julio Jones’ regular season struggles continue in response for Tennessee. And we’re not confident that a few practice sessions is enough to get Derrick Henry back up to speed either.

Titans vs Bengals Divisional Round Prediction: take Burrow and the Bengals to beat the +3.5 spread

By signing up at BetOnline ahead of Bengals @ Titans in the Divisional Round, new customers are entitled to receive up to $1,000 in NFL free bets.