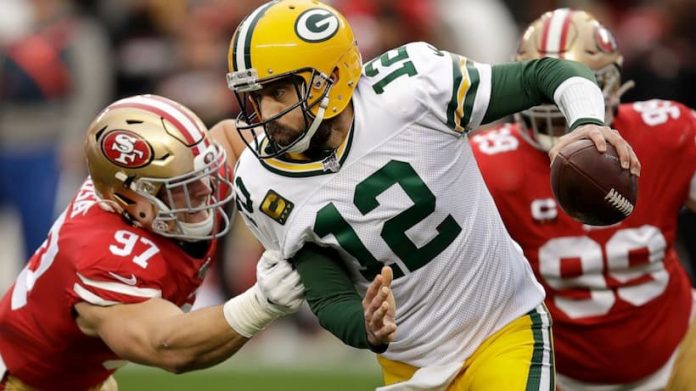 Green Bay Packers vs San Francisco 49ers is the second Divisional Round game scheduled for Saturday evening, and, as always, Sportslens is ready with free NFL picks and predictions for what should be a barnstormer of a game. Plus, find out how to claim a lucrative $1,000 deposit bonus ahead of all the action at BetOnline.

Saturday’s second televised Divisional Round game sees the best-ranked team in the NFC take on the conquerors of the Dallas Cowboys in the Wild Card Round. It’s Green Bay Packers vs San Francisco 49ers! And it should be an absolute classic!

As such, we are on hand with all the latest odds courtesy of BetOnline, a full game preview, the latest team news, and our football expert’s NFL Playoff Picks for the game. So, read on if you’re thinking of betting on the playoff action this weekend.

Below are the latest Green Bay Packers vs San Francisco 49ers odds as seen on BetOnline on Thursday, January 20.

Even with half of their star names – the likes of Za’Darius White, Jaire Alexander, and David Bakhtiari – out injured for most of the season, and even with QB Aaron Rodgers (37 passing TDs; 68.9 passer rating – No.1 in NFL) hobbling around on sore toes, the Green Bay Packers (13-4) were just one of those teams that seemed to have an answer for everything during the regular season:

It’s not that Green Bay finished particularly high in any one metric. The team tended to rank around 10th for passing yards for/against, points scored, etc. It’s just that Adam LaFleur’s team plays intelligent football; they are good-very good in all areas, and they have a QB/WR combo that can ice any coverage unit in the league when required.

In fact, excluding that awful performance in the Week-1 opener vs the Saints and the Week-18 defeat to the Lions (when the No.1 NFC ranking was all sewn up), the only team to defeat a Green Bay team featuring No.12 behind the line was the Vikings.

Up next for a refreshed Green Bay will be the hard-running, hard-hitting, in-form San Francisco 49ers, a team the Packers just about scraped a W against early on in the regular season, 30-28.

Last time out, a superb first-half performance from the 49ers on both sides of the ball was enough to see off an indisciplined Dallas Cowboys in the Wild Card Round at the AT&T Stadium.

Despite a late Jimmy Garoppolo interception that led to a spirited Cowboys response in the fourth quarter, the 49ers got the job done early and closed out the game well enough.

WR/RB Deebo Samuel chalked up 110-yards from scrimmage and a TD; the defense – prior to injuries to Nick Bosa and Fred Warner – was on fire, chalking up five sacks, a pick, and three TFLs; Elijah Mitchell ran the ball as though his life depended on it; George Kittle was great in the blocking game – make no mistake, this is a mean team. And any notion that perhaps the 49ers (9-8) didn’t belong at this stage after finishing 3rd in the NFC West was put to bed with the performance.

All things considered, this 49ers @ Packers game is fire against ice, and the winner is likely to be the team that makes the fewest mistakes.

And, on that note, it’s the giveaways stats that led us to our selection of bets.

The Packers are hoping to have LT David Bakhtiari available for this visit of the 49ers. The 3x Pro Bowler missed most of the season with a knee injury but early reports suggest Bakhtiari could be in line for limited downs come Sunday.

From a betting perspective, we recommend holding off until Saturday to see if this trio is deemed fit. The Packers’ chances of winning go through the roof if they are.

WR Marquez Valdez-Scantling (questionable) is the only new injury concern for Green Bay.

As for the 49ers, we all saw what a difference Nick Bosa and Fred Warner make to the defense when the pair were separately carted off in the Wild Card win in Dallas. The 49ers need these guys out there, and, the good news is that it’s looking promising for 49ers fans in this regard:

Warner is practicing as per normal. The captain of the defense has suffered no consequence of the leg injury that forced him off vs Cowboys last week. Bosa (concussion) is also training well and expected to play a part.

Back-up CB Ambry Thomas and backup LB Marcell Harris (both questionable) are the only other injury concerns for Kyle Shanahan.

As stated in the preview, Jimmy G’s interception vs the Cowboys last weekend ended up putting his team under a ton of pressure in the fourth. The mistake troubles us. We rate the former Patriot. But… there are genuine concerns about his ability to play football at the very highest level, the NFL postseason.

Green Bay, on the other hand, almost never gives the opposition the ball back. LaFleur’s offense has been superb in that metric all year. Rodgers has ice in those veins!

With a host of world-class talent likely to return for the defense and along the offensive line for the Packers, we’re backing LaFleur’s men to be the team that makes the fewest errors and to win because of it…

But, only just! The last time we watched Packers vs 49ers there were just two points in it!

Packers vs 49ers Divisional Round Prediction: Packers to win a tight one, 27-23. So, we’re taking the 49ers on the spread to give us a better chance of a win.

By signing up at BetOnline ahead of 49ers @ Packers in the NFL Divisional Round, newcomers are entitled to receive up to $1,000 in NFL free bets.