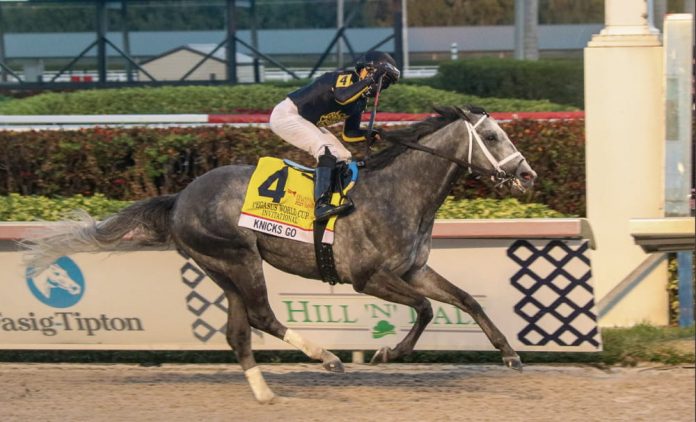 Using experts, SportsLens handicappers analyze all the Pegasus World Cup entries and forecast prices. This contest is more than just a stepping stone from last season to the valuable dirt races in the Middle East. Get the lowdown on who to bet with which horses should have value Pegasus World Cup odds below.

Sign Up at Bovada and receive up to a $1,000 deposit bonus for betting on the Pegasus World Cup horse racing.

No horse has repeated in this race, but KNICKS GO looked as good as ever when landing the Breeders Cup Classic when last in action. Regular jockey Joel Rosario eased his mount down when taking this in style 12 months ago. Knicks Go, a six-year-old son of Paynter, confirmed Keeneland form with Jesus’ Team and went on to the Saudi Cup.

He was far from disgraced in Riyadh, finishing fourth to the mighty Mishriff, one of the most versatile horses in training in Europe last year. A lack of race fitness then found Knicks Go out in the Metropolitan Handicap at Belmont Park after more than 100 days off the track.

Everything has gone right with the Brad Cox barn’s superstar since, however. Knicks Go won a couple of Grade 3s either side of the Whitney Stakes at Saratoga. He then beat Kentucky Derby hero Medina Spirit by almost three lengths in the Classic at Del Mar. That’s the leading form on offer, so it’s no wonder oddsmakers have him as the Pegasus World Cup betting favorite.

Two of the last three Breeders Cup Dirt Mile winners have gone on to follow-up in this. That suggests it may even be a better trial than the Classic, so LIFE IS GOOD is a big danger to the forecast favorite on that basis. Trained by Todd Pletcher since the second half of last year, this four-year-old Into Mischief colt really kicked his form up at notch in the fall.

Life Is Good, an easy eight-length winner of the San Felipe Stakes over an extended mile at Santa Anita last March, left Bob Baffert’s care after that Grade 2 success. His debut for Pletcher came over 7f, which proved too sharp. Back at a mile, however, Life Is Good made all in both the Kelso Handicap at Belmont and the World Championships in Del Mar.

Plenty of the smart money and Pegasus World Cup picks say to follow him. Life Is Good has two years on Knicks Go and far fewer miles on the clock. It wouldn’t be a huge surprise if online betting sites and sportsbooks had him challenging the favorite for most fancied horse in the race on the day.

Odds suggest race is a match

It is very hard to see anything troubling the big two horses here. Although there are nine Pegasus World Cup entries declared, the remaining seven runners have mountains to climb on form in Florida. The overseas and offshore sportsbooks suggest STILETTO BOY is most likely to show behind them.

Placing behind Medina Spirit over this distance in the Grade 1 Awesome Again Stakes at Santa Anita last fall, this four-year-old Shackleford gelding was only fifth in the Breeders Cup Classic. Stiletto Boy outran his odds last time out when making the show in the 7f Malibu Stakes but this is much tougher.

The rest of the Pegasus World Cup horses have even bigger forecast prices. For a level weights contest, one of these others needs a massive career best just to get into the frame. It’s a toss of a coin between the proven Knicks Go and the potential of Life Is Good for first place. Every other runner is playing for third place.

Get a $1,000 Deposit Bonus at Bovada before the Pegasus World Cup

Offshore sportsbook Bovada has a 50% welcome bonus worth up to $1,000 for all new patrons that register with their sports betting and racebook platform before the Pegasus World Cup.

Want this welcome bonus before the Pegasus World Cup? Just hit the link below and follow these steps: