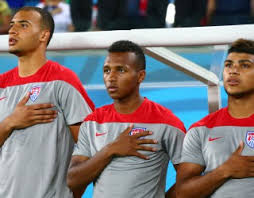 The Yanks are now preparing to go into a new direction, with a new group of players coming in and Jürgen Klinsmann will be leading the way for a bright future.

The lights of the 2014 World Cup have been turned off, but now the plans for the 2018 World Cup are already in motion for the Stars and Stripes. However, the immediate goal of the United States Coach Jürgen Klinsmann is the 2015 CONCACAF Gold Cup.

With the World Cup in Brazil done, many players who have been household names for the Yanks for several years will be moving on. The Captain Clint Demspey, Tim Howard, DaMarcus Beasley and Jermaine Jones are the few who most likely will not be returning in 2018.

The main reason why these players will not be a part of the World Cup in Russia is because these players will be above the age of 35 by 2018. In the world of soccer most players’ performance begins to rapidly diminish by the age of 32. However, for this group of players, the Gold Cup could be there swan song for their national team careers.

After the 2015 Gold Cup, Klinsmann will have to start looking into the next line of players to fill the voids of the previous generation. Since the United States will have their hands full with six possible tournaments within three years, starting with the 2016 Copa América Centenario, the 2016 Olympics in Rio, the qualification for the 2018 World Cup starting in 2016 and ending in 2017, the possible 2017 Confederation Cup and the 2017 Gold Cup. Last but not least, the grand prize of qualifying for the 2018 World Cup in Russia.

Having such a huge work load ahead for the Yanks, Klinsmann will need to relay on new young blood to carry the Stars and Stripes through these competition and succeed.

With the Gold Cup coming up next summer, the 49-year-old coach will have a possible of six to seven friendlies to get some of the young players ready to compete and win the Gold Cup to qualify for the 2017 Confederation Cup in Russia.

“A good thing about this next year is that we kind of have the opportunity to see a lot of young players coming to our platform, coming to the senior team,” The German Coach told Soccer By Ives in his final press conference before he left Brazil. “We can give them time to show where they are up to right now.”

Klinsmann has stated he will be watching with a very close eye on the veteran player’s progression, but he is eager to see what the young players can bring to the field.

“The experienced players, or the older players, we can tell them for the next couple of months, ‘Go play in your club environment, we know you inside out anyway, we know what you bring to the table,” The former German striker World Cup winner told Soccer By Ives. “But right now maybe there’s time for the next couple of friendlies that come up and over the next year that we want to see the young players grow and see how they can make it.”

With Klinsmann making it very clear that the objective is winning the Gold Cup, but making sure that this roster that competes in the 2015 Gold Cup is not just an older team; also adding a mixture of new players, to bring a breath of fresh air to the senior level.

“For the Gold Cup we want to go with the strongest team possible,” Klinsmann told Soccer By Ives. “It’s going to be similar to a World Cup. We want to play our best team, and then we can see how many of the experienced players are in it and how many are out. But this transition year coming up is definitely the opportunity to bring a lot of young players now through the ranks and see what they’re capable to do.”

The first friendly for the United States on this new cycle of introducing the younger players to the national team, will be on Wednesday, September 3 against the Czech Republic in Prague.