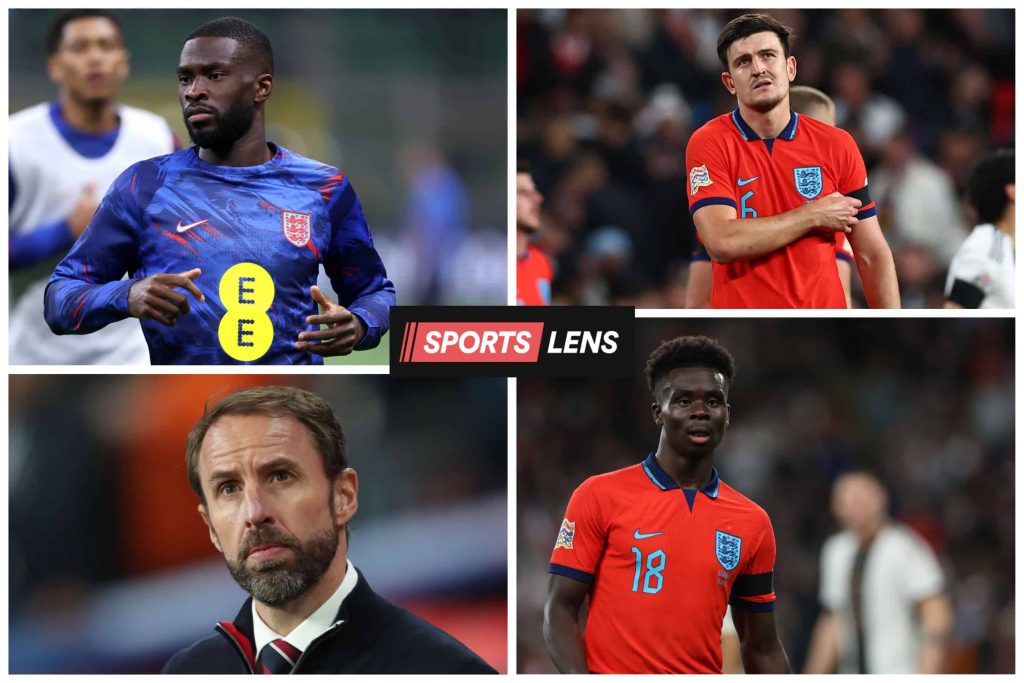 After the referee blew the whistle on 96 minutes following an enthralling 3-3 draw with Germany just over a week ago, it signalled the final time we will see England in action before the Qatar World Cup kicks off in November.

Although Gareth Southgate is likely to have made his mind up on 95% of the squad heading for the Gulf nation, the latest international break did little to determine the status of some of the more contentious inclusions.

The unfamiliarity of a middle-of-the-season international tournament means there are still some two months for players to prove their worth, injuries to plague the squad and Southgate to ultimately land on his final 26.

Bar any more major injury set backs, Everton’s Jordan Pickford will almost certainly keep his spot as England’s number one between the sticks. Despite missing out on the latest squad with a thigh injury, Nick Pope’s shaky display against Germany left the Three Lions faithful yearning for Pickford’s return.

It would seem Southgate is past the point of experimentation, which is a given considering how little time there is until the World Cup. Harry Maguire seems to be one of the England manager’s most loyal generals and will be on the plane despite some truly calamitous performances for his club and country in recent months. John Stones, providing he recovers from his latest injury setback, is a certainty along with City teammate Kyle Walker, Reece James, Kieran Trippier, Luke Shaw and likely a resurgent Eric Dier.

Declan Rice and Jude Bellingham have more than earned their place after starting both of England’s latest Nations League fixtures; the latter may well prove to be the catalyst in any potential success this year despite his tender age. Jordan Henderson‘s leadership is always a welcomed addition to the squad, while Mason Mount is a Southgate favourite, exemplified by a dazzling second-half display against Germany.

Phil Foden is yet to make a real impact in an England shirt but his ability to operate in tight spaces and move in-field may prove priceless against stubborn opponents. England’s Player of the Year, Bukayo Saka, much like Mason Mount, proved why he is an absolute must and certainly a shoe-in for a starting spot – lets just hope and pray Southgate never attempts to play him as a full-back ever again.

Jack Grealish, has always been a constant danger in an England shirt and offers a completely different dimension to the rest of the attacking options, making him a particularly attractive choice off the bench as teams tire.

Raheem Sterling, arguably the most effective player on the way to last year’s Euros final appearance, and captain Harry Kane are mainstays in the squad.

As mentioned, Nick Pope was not all that convincing in both games over the international break, but his performances since making the switch to Newcastle have been exceptional, conceding just seven goals in as many games. Arsenal’s Aaron Ramsdale was arguably the best out of the three mentioned so far last season, and completes a convincing trio of shot-stoppers who will board the plane come November.

Conor Coady, maybe not purely down to footballing merit, is a likely inclusion given the effect he has in the changing room. The Everton centre-back was described as “my player of the tournament” by assistant manager Steve Holland during the Euros despite failing to feature on the pitch.

Although he failed to make the latest squad, Ben White has been one of Arsenal’s best defensive players this season despite operating in an unnatural right-back position, and Southgate would be foolish to exclude him entirely.

Ben White should not only be part of the England squad, he should also be starting. How he has not been picked I will never know.

Elsewhere, Trent Alexander-Arnold is possibly the biggest story surrounding the squad selections. It is inconceivable that the 23-year-old could miss out on the final roster, although zero minutes and an omission from the match day squad against Germany surely signals Southgate’s hesitancy to accommodate him. The England manager risks wasting some truly world-class playmaking talent, but his performances for his country have yet to warrant a spot in a squad brimming with defensive right-sided talent.

Kalvin Phillips, who was voted England’s Player of the Year the season before last, has been unfortunate since his big-money move to Manchester City and underwent successful shoulder surgery in the hope of making the England squad for November – should he prove his fitness, he will be aboard the plane.

James Ward-Prowse has been a regular feature in England’s latest squads, and his unmatched set-piece ability is a valuable asset – it would be a surprise to see him miss out.

Hopefuls in Need of a Purple Patch

Chelsea duo Connor Gallagher and Ben Chilwell have featured in England squads in the past, but will have to hit the ground running under new manager Graham Potter. The former has been a shadow of himself in a Chelsea shirt after an explosive breakthrough season on loan at Crystal Palace last campaign, while Chilwell’s starting place at Stamford Bridge has been contested by summer signing Marc Cucurella.

The curious case of Fikayo Tomori continues to dominate discussions as well – a crucial component of AC Milan’s first Serie A title in a decade, the 24-year-old played the most minutes of any of their outfield players last season. There is a huge outcry from fans to not only include him in the squad, but also in the starting 11.

Fikayo Tomori has made more successful tackles than any other English centre-back in Europe's top five leagues since the start of last season.

Still not enough to get in the England squad 🤷‍♂️ pic.twitter.com/s2aUEM5EnB

Crystal Palace’s Marc Guehi seems to have proved he has what it takes to make the squad after being chosen at the expense of Tomori for the Germany fixture, but now must maintain consistent form for his club in the coming months.

The likes of Jarrod Bowen and Tammy Abraham were seemingly certainties after their performances last season, but the former is yet to score or assist for West Ham this year, while Abraham has struggled for Roma with two goals thus far – they will both need to pick up form before the end of November.

Ivan Toney‘s performances for Brentford this season (five goals and two assists) saw Southgate grant him his first international call-up over the latest break, and the 26-year-old presents an interesting alternative up front. While a late inclusion in the grand scheme of things, if he can continue his goalscoring exploits of late it will surely warrant a plane ticket.

Manchester United duo Marcus Rashford and Jadon Sancho will also need to prove their worth over the next six weeks to have a chance of making the squad. The former picked up an injury recently as a unfortunate time given his resurgent form under new manager Erik Ten Hag, while the latter’s prospect of making the squad is slim after failing to make the latest list but some convincing performances in the coming weeks may be enough.

Arsenal this afternoon revealed Emile Smith-Rowe has undergone groin surgery, ruling him out until well after the World Cup, although it is unlikely the 22-year-old would have made the cut after featuring sporadically this campaign.

Elsewhere, one of the most statistically creative players in the league, James Maddison, will likely be left at home unless another unforeseen casualty pops up between now and November. Despite registering 30 goals and assists last season, and three league goals so far this campaign, it would seem Southgate has made up his mind on 25-year-old.

🗣 “I speak to these footballers for a living & James Maddison is different to others.”

Defensive options Tyrick Mitchell, James Justin, Kyle Walker-Peters and Tyrone Mings have all been called up in recent squads but are likely not convincing enough to make a tournament cohort.

Meanwhile, striking options Patrick Bamford, Callum Wilson, Ollie Watkins and Dominic Calvert-Lewin are well behind the likes of Tammy Abraham and Ivan Toney in the pecking order at this moment in time.

Why not take a look at our guide to the best football betting sites.