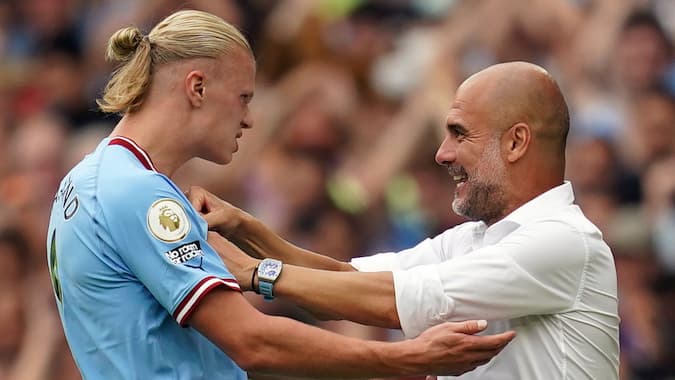 Haaland was replaced at half-time last week in a goalless draw against his former club Borussia Dortmund as he had a fever and a knock to his foot.

The former Dortmund striker has scored a record-breaking 22 goals in his first 15 appearances for City.

🗣️ Guardiola on Haaland: "He feels better compared to Saturday and Sunday, but not 100%. We don't want to take a risk."#UCL pic.twitter.com/M5sTHmg03N

He was ruled out of last weekend’s league win at Leicester City, and Pep confirmed that he will be absent against Sevilla on Wednesday night in the Champions League, but the Spaniard is optimistic that Haaland could return against Fulham at the weekend.

“For tomorrow he (Haaland) is not available.

“He’s still not 100%, we don’t want to take a risk. Hopefully we have him against Fulham.”

And the plot thickens…

Pep Guardiola confirms Erling Haaland will not feature against Sevilla, but will he be ready for Fulham on Saturday? 🤔#FPL https://t.co/vKGJ2CIrQ4

This midweek fixture allows for Guardiola to rest some key players, so City could throw some youngsters into the action with the Citizens already through to the knockout stages.

“I will have to see from the training sessions, but of course there are four days, the recovery time is different to three.

“But of course the players who don’t play as regularly are going to play, for sure.”

If you fancy betting on the game, and other UCL odds, check out our best betting sites.