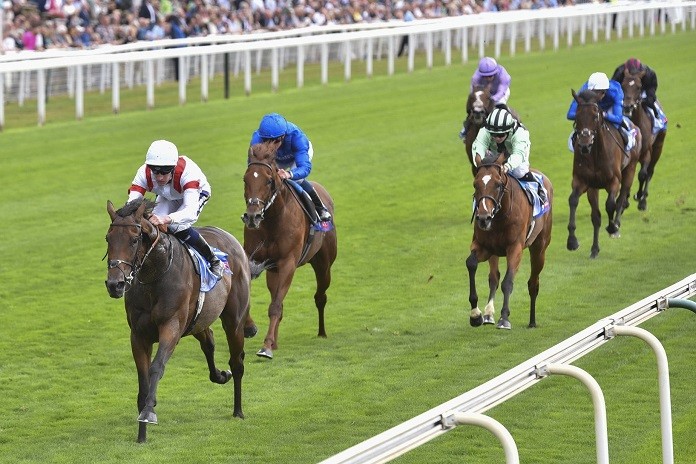 Just 10 British and Irish raiders remain as possible 2022 Melbourne Cup horses following the publication of the weights for this year’s edition of “The Race that Stops a Nation”. No raider from our shores heading Down Under to Flemington on Tuesday, 1 November will have more than 8st 10lbs on their back in Australia either.

Event organisers, the Victoria Racing Club, appear to have been generous in their assessment of Anglo-Irish 2022 Melbourne Cup horses. SportsLens experts profile the 10 who could be heading to the Southern Hemisphere this autumn.

The Lexus Melbourne Cup is a Group 1 handicap for horses aged three and up. Attracting worldwide entries, it is the centrepiece of Australian horse racing‘s Spring Carnival as it is the opposite season for the time of year in Europe.

Allotted the heaviest weight of all potential British raiders, WITHOUT A FIGHT wintered abroad for the first time earlier this year. While disappointing in the Sheema Classic, he ran on well when just beaten a head by Epsom races Coronation Cup hero Hukum in the Dubai City Of Gold at Meydan.

Since returning to the UK, Without A Fight ran third in a Newbury Group 3 and then won his last two outings. Both came at York in recognised course and distance trials for the Ebor Handicap. He skipped Europe’s equivalent of the Melbourne Cup, however, to be kept fresh for autumn assignments.

Rated 113 by the BHA handicapper, Without A Fight readily accounted for the Ebor fourth, John Leeper, on each of his last two starts. Still unexposed as a stayer, the fact that his four wins over the last couple of years have come in small fields is a concern.

What a pity that DEAUVILLE LEGEND is a gelding as, had he remained entire, he might well have won the St Leger. While the Classic at Doncaster races wasn’t open to him, the Melbourne Cup has instead been the end-of-year target for his ambitious trainer and owner.

Deauville Legend won two recognised Leger trials in the Bahrain Trophy at Newmarket and then the Great Voltigeur at York. In-between those efforts, he also chased home New London under a penalty at Glorious Goodwood. He thus has a similar profile to one of the recent successful Melbourne Cup horses in Cross Counter.

This test could be tailor-made for Deauville Legend, so it’s no wonder that the top betting sites in the UK have him ante post favourite for Flemington. Granted further progress and provided he travels well Down Under, the assessor has given him every chance of following in Cross Counter’s hoofprints.

Could we see Royal Ascot and St Leger hero ELDAR ELDAROV in Australia? It seems unlikely at the moment. His trainer, Roger Varian, named other autumn targets much closer to home for his Classic winner.

Eldar Eldarov has British Champions Day back at Ascot with the Long Distance Cup or the Group 1 Prix Royal-Oak in France later in October as possible final runs for the campaign. Looking long-term, Varian sees his new stable star as one to go back to the royal meeting next year for a tilt at Gold Cup glory.

St Leger flop HOO YA MAL is Australia bound but will soon be changing trainers as he makes a permanent new home Down Under. In a way, he can’t be regarded as one of the British 2022 Melbourne Cup horses once he comes into the care of Gai Waterhouse but we thought we’d look at him anyway.

Hoo Ya Mal placed in a couple of Classic trials before defying massive odds of 150/1 to finish second in The Derby at Epsom. That display led to a change of ownership and stables from the Andrew Balding yard to George Boughey with the dual plan hatched of being trained for Flemington and the St Leger en route.

Unfortunately, Hoo Ya Mal rather flopped at Doncaster after his Group 3 Goodwood races win in the March Stakes. The fact that he didn’t appear to stay when last in action raises doubts about his stamina, but connections won’t be deterred from having another go.

The best of the Ebor form from the premier York races and staying Flat handicap in Europe is represented by ALFRED BOUCHER. Sneaking in to the English equivalent of the Melbourne Cup under a penalty earned for a win three days earlier at the same meeting, he nearly pulled off a memorable quick-fire double.

For any horse to suddenly find the form of his life, and then be let into a race like this in Australia so lightly may tempt connections. Alfred Boucher will probably get a run and avoid being balloted out, based on recent years. Flemington isn’t York, yet both courses are on alluvial flats close to a river, so he may be capable of replicating what he did on the Knavesmire if going Down Under.

Irish trainer Paddy Twomey has had a fantastic season, so why not go to Australia with EARL OF TYRONE? He was only beaten a length in the Ebor when third on his penultimate start but that big effort from the ante post betting favourite in York’s big handicap seems to have taken its toll.

Earl Of Tyrone folded tamely when dropped back to 1m 4f in a Group 3 at Leopardstown on Irish Champions Weekend recently. That is a worry and he has other entries. The Irish Cesarewitch, a Premier Handicap for Flat stayers in the Emerald Isle, sees Earl Of Tyrone 2lb well-in on his current mark.

It’s very unlikely that the remaining British and Irish 2022 Melbourne Cup horses will get a run without a ballot exemption. RODRIGO DIAZ has Australian co-owners, so a trip Down Under to the Spring Carnival looks on his agenda regardless. The issue with him is a nine-race winless run since last summer.

Rodrigo Diaz has three placed efforts to his name over the two-mile trip of the big race. Just the one career victory on turf is another worry, and he looks every inch a big outsider even if his form in staying Sandown Park races from this summer stacks up.

The owner-trainer combination of Lloyd Williams and Joseph O’Brien should always be feared in this race. POINT KING is one of the most lightly-raced 2022 Melbourne Cup horses but his upward curve stopped just as sharply as it started when a beaten favourite on Irish Champions Weekend last time out.

Given the weight that the Victoria Racing Club have allotted him, Point King will need to win a ballot exemption race in order to get into the final field. Two of his three career wins have come beyond a mile-and-a-half, so that provides hope but there are definite questions to answer after trailing in last at Leopardstown.

The powerful owner-breeders Coolmore share Chester races handicap winner TEMPLE OF ARTEMIS with Westerberg and Williams. This is the mother of all syndicates with interest in this young horse but his form leaves a lot to be desired. Similar comments apply to the same trainer’s Point King above.

Temple Of Artemis had some fancy entries much closer to home in the UK and Ireland but was never on terms on his final two starts. Given who owns him, this could be part of some long-term plot to pull off another big surprise Down Under. A ballot exemption is essential, though.

The Coolmore set and Westerberg also have Aidan O’Brien colt WATERVILLE still engaged. He’s the last of the 10 British and Irish 2022 Melbourne Cup horses in contention. An impressive winner of a staying Limerick handicap, both the Irish and English Cesarewich are also options.

He would need to win one or other in similar style to have any chance before being quickly shipped off Down Under. Those Flat stayers’ handicaps closer to home look more Waterville’s bag.