Want to see the Cheltenham Gold Cup results of recent years? No problem. You can view the renewals of the blue riband steeplechase event going back over the last six years right here. 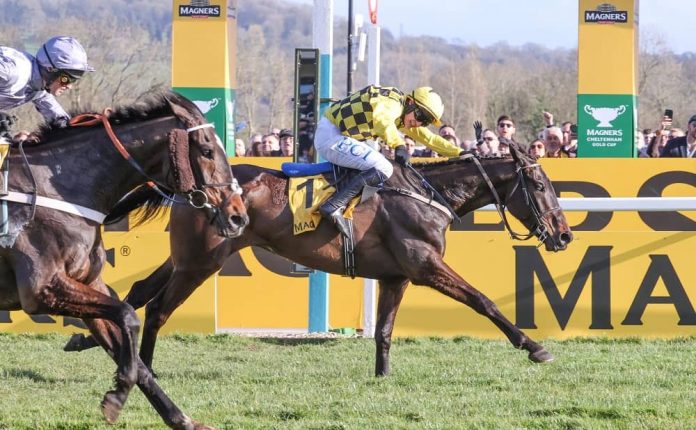 Among all of the Cheltenham results the Gold Cup is by far the most important at the Festival. This race is the most valuable at the meeting, and its winners are assured their own piece of history. Looking back over past Cheltenham Gold Cup results today can help you decide whether to back the same horses again in the race this year or choose others.

As form goes, the race results from the Gold Cup is virtually guaranteed to throw up subsequent winners. This is because the very best staying steeplechasers in training target Cheltenham and a tilt at glory in this main event. Much of the Festival’s appeal is due to this race alone. First contested as a jumps race in 1924, there is around a century of prestige lying behind this contest.

It almost goes without saying that Gold Cup betting is pretty intense and integral to the wider gambling industry in the UK and Ireland, and even the USA and other countries. Similar comments apply to the Cheltenham Festival as a whole but this is the type of race where ordinary members of the public watching on TV may take a punt as well. That is one major reason why looking back over results of the Cheltenham Gold Cup matters.

If tipsters and experts look at these before giving their Gold Cup tips, then so should you before you bet. That only seems logical. Past Cheltenham results from the Gold Cup can impact the current market, not to mention the thinking of shrewd judges and industry insiders. What happened in this race before is more than just a note in the history books. This can also shape the future.

Without further ado, it’s time to look back over results of Cheltenham Gold Cup recent history. See each of the last six renewals of this great race:

Previous Cheltenham Gold Cup results were reversed when A Plus Tard went one better than his previous attempt in the blue riband steeplechase. Rachael Blackmore became the first woman to win the Festival feature with a 15-length romp over Minella Indo. Protekorat was best of the rest and British behind another Henry De Bromhead 1-2, hanging on to third by a short-head.

Cheltenham Gold Cup 2022 results show National Hunt Chase and Savills Chase scorer Galvin just out the money in fourth, ahead of Royale Pagaille in fifth. Al Boum Photo was next with market support for the now beloved veteran not able to roll back the years. It was an emotional success for owners Cheveley Park Stud, who also landed the Ballymore Novices Hurdle and Ryanair Chase  at this Festival.

The Cheltenham Gold Cup results 2021 capped an incredible Festival for Irish trainer Henry De Bromhead with him saddling the first two home. Minella Indo, a previous winner at the meeting after landing the Albert Bartlett over hurdles two years earlier, stayed on best and prevailed from stablemate A Plus Tard by just over a length. The front two were chased home by dual Gold Cup hero Al Boum Photo, who came up a little short in search of his hat-trick.

Those three were well clear of Native River and Frodon. De Bromhead had also won the Champion Hurdle and Queen Mother Champion Chase earlier in the Festival, become the first handler in history to land all three of Cheltenham’s biggest championship races in the same season. Each had a different jockey on board with Jack Kennedy riding the third leg of De Bromhead’s unparalleled treble for owner Barry Maloney.

No horse had won back-to-back Gold Cups since Best Mate. That was until Al Boum Photo ended a 15-year wait for horse racing fans to see a successful defence of the blue riband. The Cheltenham Gold Cup 2020 results show him toughing it out under Paul Townend and holding on by a neck from the Cotswold Chase winner Santini and Betfair Chase scorer Lostintranslation little more than a length further behind.

A blanket finish like this to the Gold Cup is unusual. Just a couple of lengths separated first from fourth. For Al Boum Photo trainer Willie Mullins, though, the blue riband of steeplechases must have seemed like buses. He had been waiting his whole career to saddle the winner of it, only for the same lightly-raced horse to deliver consecutive crowns.

Mullins had been trying for years to win this race and often just came up short. He finally broke the hoodoo in the Festival’s centrepiece contest courtesy of Al Boum Photo. A lightly-raced type who fell at the meeting 12 months earlier in the JLT Novices Chase, the Cheltenham Gold Cup 2019 results reveal a gallant success after so many years of the stable slaving away to land the spoils.

Al Boum Photo, returned at Gold Cup odds of 12/1, was home more than a couple of lengths in front of last season’s third Anibale Fly, who again stayed on off the pace for his shrewd Irish connections. There was then almost four lengths back to Bristol De Mai, a horse not particularly suited by Cheltenham or the going for racecourse local trainer Nigel Twiston-Davies. Native River could only come fourth in his attempted defence of the title.

Last year’s third went two places better and won at the Festival at the fourth attempt as Native River achieved what trainer Colin Tizzard always hoped Cue Card and Thistlecrack could. A light campaign paid off, as Gold Cup results 2018 demonstrate. Native River and Might Bite had one of the great Cheltenham duels with the winner making virtually all the running in tremendous style. He simply galloped his rivals into submission with an exhibition of jumping.

Richard Johnson had won the Gold Cup before after steering Looks Like Trouble to victory in 2000. Some 18 years on, he had another taste of glory in this elite race. Native River saw off horse racing betting sites‘ favourite Might Bite with over four lengths between them at the line. Anibale Fly, for clever Irish trainer Tony Martin and mighty owner JP McManus was beaten about the same distance again after staying on into a never nearer third.

Sizing John continued his remarkable progress after starting the campaign as a two-miler chaser. Sick to death of running into Douvan, trainer Jessica Harrington and his owners Alan and Ann Potts decided to do something different in the second half of the season. He not only stepped up in trip and won at Thurles, but did so again in the Irish Gold Cup at Leopardstown and then once more here. Cheltenham Gold Cup 2017 results highlight the strength of the previous season’s National Hunt Chase form too.

While Minella Rocco and Native River were no match for Sizing John, they emerged out of the pack and battled out second place. Just a short-head separated the Jonjo O’Neill runner in the McManus silks from Brocade Racing’s Native River, but the form from last year’s Festival was upheld. After recording these Gold Cup 2017 results, Sizing John went on to complete a unique hat-trick at Punchestown at the end of the following month.

The first Irish clean sweep for a decade is the key takeaway from the 2016 Gold Cup results with Don Cossack the clear winner for Gordon Elliott. His owners, Gigginstown House Stud, also had the third home in Don Poli but the pair were split by Djakadam, who was 10 lengths clear in second. This was another breakthrough for Grand National winning trainer Elliott.

Connections ran Don Cossack in the Ryanair Chase over a shorter distance at the Cheltenham Festival 12 months earlier and he could only finish third. He also previously fell in the RSA Chase and the King George at Kempton on his penultimate start. All of those disappointments were well and truly behind Don Cossack, though, with him running out a comfortable winner under Bryan Cooper.

We hope our look back over past Gold Cup results has been useful for you. This great race has had some very worthy winners in recent times. Always be on the lookout for Gold Cup betting offers, especially if these involved previous winners or horses that have run well in the race before.

All results are pieces of the form in the book you can analyse and look at the merits of. That is the beauty of horse racing as a whole. Some stand scrutiny and Gold Cup results invariably fall into that bracket. Looking back on them may help you decide what to do with any bonuses acquired en route to Cheltenham or during the Festival too. It is always handy to have Gold Cup free bets available after viewing past results of this race.

Place Your Bets on the Cheltenham Festival with Betfred

What horse has won most the Gold Cups?

Golden Miller has won the most Gold Cups at Cheltenham with a record five successes in the 1930s. In 1934, this horse did an incredible doing going on to land the Grand National at Aintree after a third consecutive Gold Cup.

What was the result of the Cheltenham Gold Cup?

The most recent Cheltenham Gold Cup results show Minella Indo winning in 2021 from stable companion A Plus Tard. Al Boum Photo, the defending champ and dual race winner, was back in third.

Has any horse won 3 Gold Cups?

Has any horse regained the Gold Cup?

Yes, the legendary Kauto Star regained this crown as a nine-year-old in 2009. That season’s Gold Cup results show him defeating Paul Nicholls stablemate Denman in a golden era for British steeplechasers.

Have any mares won the Gold Cup before?

Four mares feature in past Cheltenham Gold Cup results as victors. A female horse won this for the first time way back in 1925 with Ballinode also becoming the first winner trained in Ireland. Kerstin in 1958 was the next of the mares to land this with Glencaraig Lady (1972) and Dawn Run (1986) on the roll of honour.