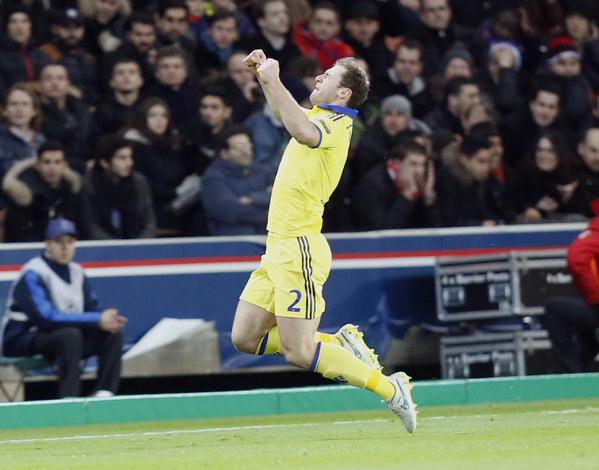 Chelsea boss Jose Mourinho will be more than happy to see his side getting a draw and a crucial away goal against Paris Saint-Germain in the first leg of the Champions League Round of 16 tie at the Parc des Princes on Tuesday night.

The Blues took the lead through Branislav Ivanovic in the 36th minute after some neat exchange of passes from three Chelsea defenders in the build up to the goal.

An uncharacteristic lapse in concentration saw PSG restoring parity through Edinson Cavani early in the second half.

Chelsea invited prolonged pressure since but a combination of ‘phenomenal’ goal keeping from Thibaut Courtois and lack of clinical finishing from PSG meant there was no further addition to the scoreline.

Ivanovic once again proved why he is so crucial in big matches. The Serbian has made an uncanny habit of scoring in big matches, and here again, he took his chances and gave his team a crucial away goal.

Branislav Ivanovic, a RB/CB has scored 27 non-penalty goals in the last five seasons across all competitions, or 2 more than Steven Gerrard.

You can’t stop Ivanovic… Get ’round him and he’ll rugby tackle you. You shall not pass. He’s in epic form. — Nick (@OhDennisWise) February 17, 2015

The number of crucial goals Ivanovic has scored for Chelsea is remarkable. Can’t believe many Chelsea fans still dislike him.

While Ivanovic’s goal put chelsea in a descent position ahead of the second leg, it was Courtois who kept the tie alive for the Blues with flurry of exceptional saves.

The Belgian, who replaced Petr Cech for this tie, made several outstanding saves with Mourinho rightly described his performance as ‘phenomenal’.

“If football was about having nine outfield players plus two goalkeepers, we would give no chance to anyone,” said the Chelsea manager. “We would be absolutely phenomenal because they’re both phenomenal.”

Mourinho: “Is Courtois the best keeper in the world ? I try to be honest & I cannot take Neuer out of this group. We have 2 of best 3.” #CFC — ChelsTransferGossip (@ChelsTransfer) February 17, 2015

China made an offer for Courtois. They want him to replace the Great Wall of China.

Chelsea got away with it tonight. PSG had big chances. Courtois superb. Advantage Chelsea with home leg next. Far from formality. — Ian Darke (@IanDarke) February 17, 2015

Overall, Chelsea fans will be happy with the result. For the sake of record, Mourinho has never lost a Champions League tie after securing a score draw in the first leg away from home.