Sportslens.com
Home Blogroll German superstar must ‘fight’ to save his Chelsea career 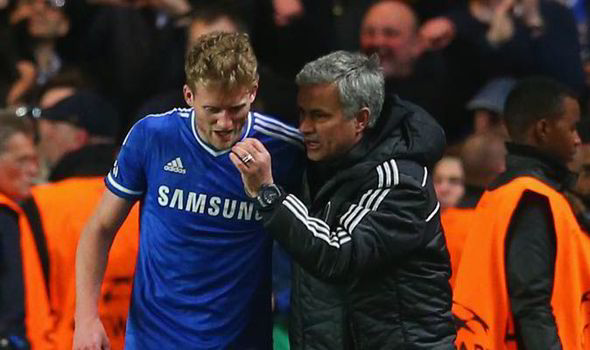 Andre Schurrle had an interesting 2014. After becoming a regular part of Chelsea’s setup towards the end of the 2013/14 following some exquisite performances, he was part of the German team that won the World Cup in June. Schurrle scored 3 goals in the tournament despite getting limited time on the pitch, and also assisted the winner in the final for Mario Gotze.

On the opening day of the current season, he started ahead of Willian and scored an absolutely sublime goal in a 3-1 away win at Burnley. He seemed on course for a memorable season with a side that was looking good to be all-conquering.

Since then though, Schurrle has only started 4 games in the Premier League and hasn’t completed 90 minutes even once. Willian has very much taken over as he right-sided attacking midfielder behind the striker, and Schurrle has been forced to be happy with cameos off the bench.

Jose Mourinho, to be fair, has tried to give him more game time but Willian’s style of play has suited Chelsea so well that it’s difficult to replace him. Two weeks ago, Schurrle started against Southampton, the first time he had done so since October. The next weekend, he was once again played from the start in the FA Cup third round against Watford. On both occasions, he was taken off at half-time.

Andre Schurrle looking like a player who needs a good game. Not sure he’s going to get one here today.

Amidst all this, there has been a lot of speculation linking the German to a move away from Stamford Bridge in January. While both Chelsea and Schurrle have stated that they do no want this move to happen, the club will certainly consider a good offer if it comes their way.

So, what is it that Schurrle is doing wrong? Does he have a future at Chelsea?

According to this piece by Matt Hughes in The Times last week, Mourinho wants Schurrle to start becoming a bit more physical in his style of play to be on the pitch more often. The Portuguese feels that he loses the ball too easily at times and then doesn’t retreat to try and win it back.

Mourinho’s teams are based on a lot of defensive discipline, and hence we have seen highly-technical players like Eden Hazard and Oscar adding a different dimension to their games and help out defensively when needed. Cesc Fabregas too, is not too shy to put in a tackle. It is reported that the next player Mourinho is looking to transform is Schurrle and the winger is going through additional weights sessions in training to add muscle mass. There is an obvious liking that the manager has for the player, and he is doing all he can to get him suited to his style.

Also responsible for Schurrle’s limited action is Willian’s form. The Brazilian may not have the greatest goals or assists stats come the end of the season, but is an invaluable cog in the Chelsea system. His tenacity and willingness to do the dirty work when the opposition is in possession, coupled with his own quality and talent on the ball make him the perfect ‘Mourinho player’. He is almost an untouchable in this side, and looks like continuing to be one for the years to come.

Even though Schurrle is on course to stay at Stamford Bridge for the remainder of the season, the next 5 months are very vital for his Chelsea career. He simply has to make the most of every opportunity he gets in the side, and must undergo the transformation Mourinho wants him to make in order to play regularly.