Arsene Wenger was relatively unknown in England when joining, but quickly gained the respect of the players, coaches and pundits, as he led Arsenal to the Premier League and FA Cup double in his first full season in 1997/98. He revolutionised the modern game in the Premier League when joining Arsenal in 1996, becoming the first foreign manager to win the division, and has consistently kept the club in the elite competition of the Champions League. But his acceptance of fourth place every year has led to the demise of the club and the questionable showing of a lack of ambition created unrest with the Arsenal fans. Settling for Wenger’s self-titled ‘fourth-place trophy’ is not appealing to fans anymore, as the club that was once feared throughout Europe, has regressed to a shadow of its former self.

After winning the FA Cup last season, Wenger managed to bring his first piece of silverware to the club since 2005. Wenger has overseen the deterioration of Arsenal’s league form over the past 10 years and seen the club lose their most important players to rival teams and bigger teams, as he failed to hold on to them. The fans have had to settle for mediocrity for the past 10 years, as Arsene failed to lead the club to a trophy win between 2005 and 2014. Between these years, Arsenal have had 6 fourth place finishes and 3 third place finishes. Previous to this, Wenger only finished third in his first season, where he took over mid-season, winning the league 3 times and finishing second 5 times. Fans have been fairly tolerant over these past 10 years, but are now becoming more impatient, as Arsenal have finally left their transitional period after moving to the Emirates and dealing with the financial implications that brought to the club. 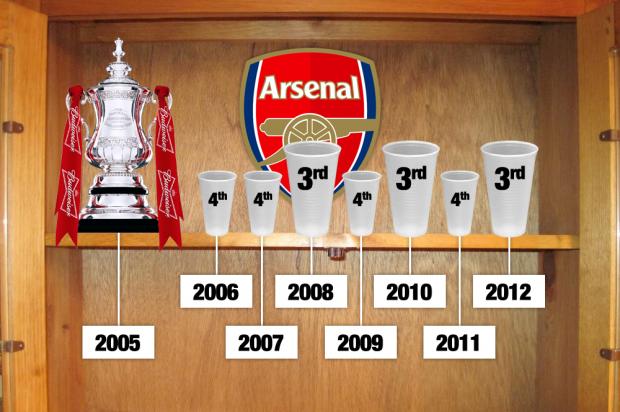 Not competing in the Premier League is frustrating the fans

This season in particular, Wenger’s tactics have been exposed by oppositions and described by pundits as predictable. For example, in the Swansea game, Arsenal were 1-0 up in the 70th minute, yet Arsenal players were still pushing forward, including the full backs, as the defence was allowed to be easily penetrated, leading to a 2-1 comeback from the Swans. Arsenal legend, Lee Dixon, has previously said that Wenger “doesn’t particularly know whether the left back is in the right position or not”. Whether the comment was tongue-in-cheek or not, it still reveals Wenger’s lack of acknowledgment of defensive duties on the field. Wenger should call for the players to try and protect the 1-0 lead away at Swansea, and he should definitely not allow his defence to be exposed so easily. Some people view that Wenger stubborn traits have been the reason behind Arsenal’s lack of challenging at the top level and this is linked to the lack of addressing squad issues in the transfer windows. It has become apparent that Wenger has failed to replace leader and central midfielder, Patrick Vieira, after 10 years, and this summer he exited the transfer window with an obvious lack of central defenders.

Arsenal have lost numerous leads this season due to tactical errors

Arsenal have not finished in the top 2 positions in the league since 2005 and some fans believe that Wenger is the problem and wish for him to resign or be sacked as soon as possible, as revealed in the banner shown at the West Brom this season. However, I believe that he needs to leave of his own accord and the manager needs to be given the respect that he deserves, as he has been successful at this club. Entering his 19th season at the club this August, Wenger needs to contemplate whether he is the right man to take Arsenal forward, as he cannot view himself as succeeding through fourth place finishes. At the end of this season, the board should propose the idea to Wenger that he should move ‘upstairs’ to the boardroom, like Sir Alex Ferguson did, allowing a new manager to come in and attempt to bring Arsenal back to the top level, where the club once was, not too long ago. 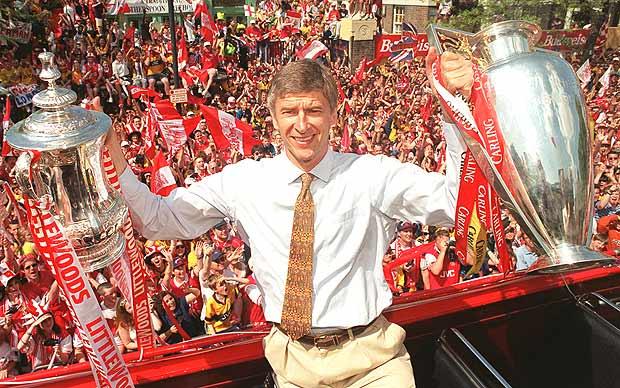 Wenger won the double in 1997/98 but is it time to leave the club that he has brought so much success to?