A flattering and at times thoroughly undeserved 3-1 victory at the KC stadium saw us finally capitalise on Chelsea’s poor recent form as we closed the gap at the top to 2 points. However, before we get too carried away with the score-line and effect of the result, let’s bring a bit Scrooge’s miserly wisdom into the proceeding as we focus briefly, yet solely, on the ‘flattering’ and ‘undeserved’ parts.

The team-sheet encouragingly suggested that our injury woes were rapidly becoming a thing of the past; as the more familiar backline of Rafael, Brown, Vidic and, of course, Evra, took to the field; with Fletcher and Carrick back to their more natural roles in central midfield. Even our latest potential injury victim – Berbatov, after it was revealed earlier this week he needed knee surgery– played through the pain barrier to start up-front with Rooney and give our attack an utterly intimidating feel.

Yet, as was to be expected given our poor run of form (and by ‘run of form’, I mean pretty much the entire season) we gifted the opposition too many opportunities; opportunities you feel that a more able, more threatening side would have severely punished us for.

We were simply unable to maintain possession for considerable periods of time, with our passing – special mention going to Giggs, Carrick and surprisingly Valencia – being clean cut shocking. Even Evra, for the second game running, was unable to deal with his winger, resulting in an overly careless and costly display. So much so that, due to a number of avoidable errors, he was forced into committing about several fouls – at least 3 of them bookable – yet for all his efforts to get sent-off was only granted a solitary yellow card…perhaps the pressure got to Mr.Wiley on his first United game since that Sunderland draw? 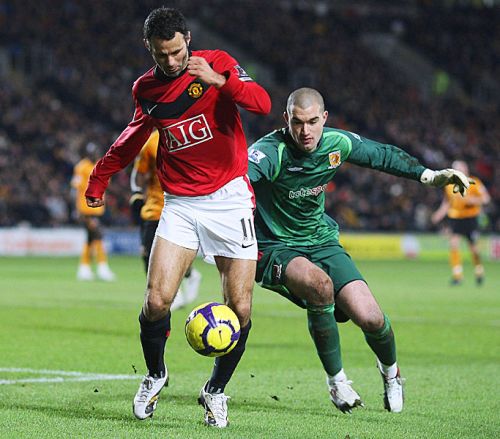 In the first half we played amongst our most sloppy, wasteful football of the season; yet, as is typical when you adopt the ‘champions’ tag, we went in at the break with a 1-0 lead after Rooney netted one of our few genuine chances of the game.
As the first-half lingered and withered away, with Andy Gray insisting Ferguson will be having stern words in order to try and sort out our mistake ridden performance, Fletcher squeezed a cross into Rooney (via the slightest of Giggs deflections) to make it 1-0 in first half injury time.

For all Hull’s resilience and ambition they showed through maintain possession (an incredible 61% at full-time), it was us who undeservedly took the lead; thus allowing Fergie a slightly more relaxed chat at half-time.

It was much of the same in the second, yet thanks to a consistently shite passing display and further lapse in concentration, it inevitably got that bit worse. Our wasteful possession and slapdash style was finally punished when Rooney carelessly gave the ball away inside the area, which lead to Rafael conceding a penalty.

Out of the four score-lines that occurred throughout the day – from 1-0 to the final result – I honestly felt the most realistic based on performance and general effort levels from both sides was this, at 1-1. It would have taught us a lesson in ‘how to play shit, seemingly get away with it but then rightly get punished’, however, going back to United’s eternal ‘the sign of true Champions’ mantra: we had an off day that will instead go down as deceptively convincing 3-1 victory.

Our second goal, that effectively ended Hull’s enthusiastic challenge, was a decent counter-attack that was created by Rooney and, to unjustly rub salt into Hull’s wound, scored by Hull defender Dawson. To round off Wayne’s eclectic day (and Hull’s ever more embarrassing day), he was yet again involved in the fourth and final goal of the afternoon to redeem himself of his error for their goal.

Leaping onto a loose ball, he brilliantly passed to the wanting Berbatov at the far post; playing it through Gardner’s legs. Another fine move calculated by Wazza that will round off a good away victory and conveniently reject any suggestion of United’s sloppy football.

Again, I DO understand that I should be, as all United fans undoubtedly are, clinging onto the final reality of the game and the positive result; as the win has brought us that bit closer to wasteful Chelsea, but I cant help feeling disappointed at the display and the more pressing realisation that we currently lack passion, determination and overall fight. The 2 winning goals were actually rather impressive, but how much space and time are we realistically going to be given, as were today, against stronger opposition? And how frequently will teams fail to punish us as Hull did and instead grant us the opportunity to spark the odd flash of brilliance in order to eliminate all our wrongs?

Sloppy football from United has been a reoccurring theme of late, yet unlike Fulham or Villa before them, Hullgenerously made us look good when realistically we were way below par…or is to win without playing well simply the sign of Champions? I get confused…