If you could form the ultimate five-a-side football team who would you pick? I’ve been thinking about mine for the last couple of days and I ‘think’ I have finally narrowed it down; so I thought I’d write this and submit it before I change my mind again! 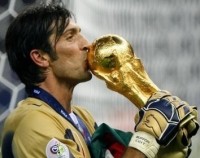 In goal I think I would have to have Italy’s number one Gianluigi Buffon. At the top of his game he’s the best by far in the world. Although he will be 30 next year he still has the physical ability and reflexes required from goalkeepers at the highest standard. The guy was born into a sporting family so he was destined to become the best in his game! He was really important in helping Juventus get promoted back into Serie A after they were demoted with the whole match-fixing scandal and was deservedly offered a new contract once they were promoted which will keep him at the club until 2012. Need to mention Petr Cech but still sticking with Buffon for his experience. 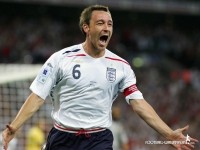 Now in defence I debated for a while whether I’d have two defenders or two midfielders and in the end opted for the latter option, simply as it was too hard to cut out one of the midfielders I had in mind! Therefore the rock in my defence and captain would be John Terry. Some of you may think I’m biased for sticking an Englishman in there, maybe I am, but he plays with so much passion for club and country its difficult not to add him. He never backs out of a tackle and always gives 110%. Now that’s praise seeing as I’m an Arsenal fan! The guy is so hard that after he got a full boot to the face last season from Abou Diaby, spasmed on the pitch and was rushed to hospital he discharged himself just a few hours later to celebrate with his team-mates after winning the Carling Cup and was back playing the following week!!

Those two midfielders I mentioned: Kaká and Cesc Fabregas. Again many of you might argue this now and start saying Ronaldinho but judging from this season I wouldn’t want him. Kaká and Fabregas are the driving forces in their teams and have the creativity and awareness to change a game and get results for their teams. They never stop running and so the two of them together will be absolutely lethal. Some of you might say I’ve chosen Fabregas because I’m a Gooner and you’re right. It’s my team and he’s too good! Cristiano Ronaldo is someone I considered a lot too but the two I’ve gone for edge it for three reasons: 1) still can’t forgive him for “winkergate”, 2) he plays for Utd and 3) he’s too arrogant. I’ll have him as a sub.

That just leaves the one striker. I’ve thought about this a lot and found it the hardest to select the attacking players. Thierry Henry is a favourite but his last year with us was hardly worth remembering and this season he’s still adapting at Barcelona. On his day he’d have to be in there straight away. So would Fernando Torres or Wayne Rooney who I’m big admirers of also but I think for his raw skill, confidence for his age and team-work I’ve got to choose Lionel Messi. He can finish, he can run with it, he’s good in the air (with his hands — backup for Buffon in that case!) and he can set up goals. An all round forward and he’s only 20!
. 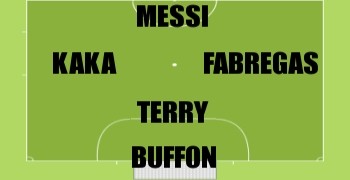 Obviously most of you probably won’t agree and everyone’s going to have their own opinion, so let me know what yours is by adding your comments below.