A week after Liverpool and Manchester United played out an intriguing 0-0 draw at Anfield in the Premier League, the two old foes met again, this time in the FA Cup Fourth Round.

A goal-packed clash ensued, and it was United who emerged 3-2 winners thanks to goals from Mason Greenwood, Marcus Rashford and Bruno Fernandes.

In this analysis, we will take a look at how they pulled it off: 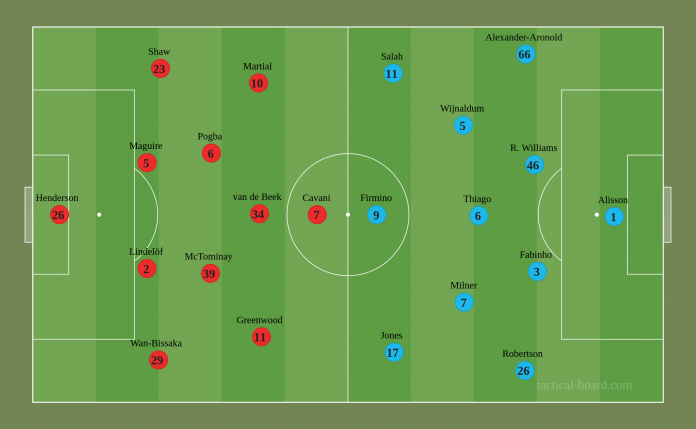 United played in a 4-2-3-1 with Dean Henderson continuing as the Cup goalkeeper. Aaron Wan-Bissaka, Victor Lindelöf, Harry Maguire and Luke Shaw made up the back-four, while Scott McTominay partnered Paul Pogba in holding midfield. Donny van de Beek got a surprise start as a number 10, with Mason Greenwood and Marcus Rashford on either side of him. Edinson Cavani led the line.

Jürgen Klopp deployed a 4-3-3 for Liverpool with Alisson keeping his spot in goal. Trent Alexander-Arnold, Rhys Williams, Fabinho and Andy Roberston were the four defenders, while Georginio Wijnaldum, Thiago Alcântara and James Milner completed the midfield. The front-three included familiar faces in Mohamed Salah and Roberto Firmino, but Curtis Jones was a bit of a surprise inclusion on the left.

With just over 40% of possession, United found themselves defending quite often. Here is how they did it: 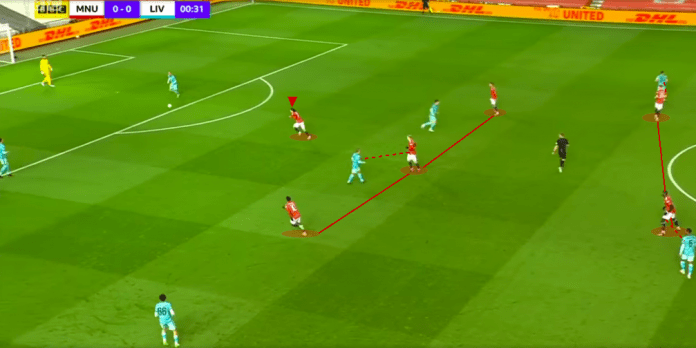 United defended in their 4-2-3-1 formation, with each midfielder marking a Liverpool counterpart with the ball in the opposition half.

Depending on which side the ball was moved to, one of the wingers pushed up alongside Cavani to press. 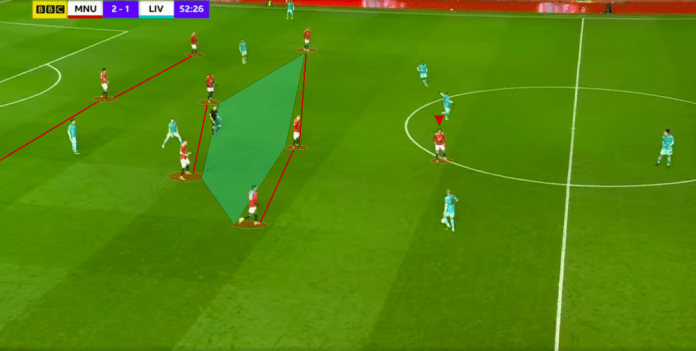 Further back, United maintained their 4-2-3-1, but they made their lines a lot more compact, as you can see above.

The selection of Jones on the left of attack was a surprise for many, and it brought along a change in system for Liverpool.

Liverpool too pressed in a 4-2-3-1, with Wijnaldum pushing a bit further up than the other two midfielders. The wingers – Salah and Jones – were used to try and trap either of the United holding midfielders along with Wijnaldum, while also keeping an eye on the full-backs. The Dutch midfielder angled his runs in such a way that one of the United pivots would be in his overshadow, while his momentum would take him to the other. 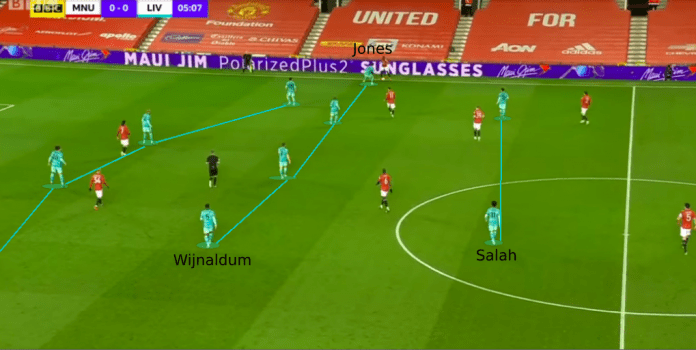 Further back, Liverpool defended in a 4-4-2, with Salah joining Firmino up front, while Jones went to the left of the midfield line and Wijnaldum went to the opposite side. 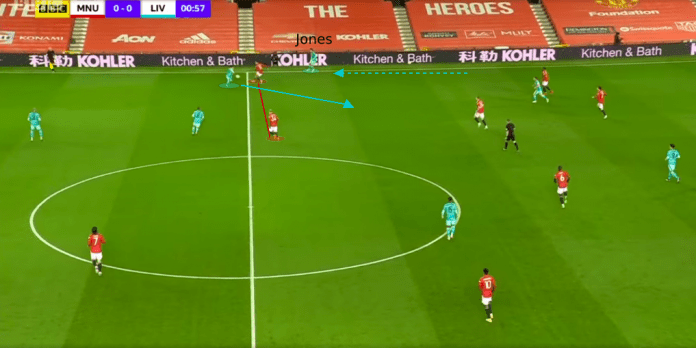 While playing out from the back, Liverpool often looked to advance into the opposition half through United’s right, where Greenwood was targeted. Jones would drop back to outnumber the United academy graduate along with Robertson, allowing one of the two to advance through the half-space between Greenwood and van de Beek.

Milner made late runs into the box from midfield, trying to overload the penalty area. Above, you can see that he is stalking in undetected as the United defence is concentrating on Salah, Firmino and Jones.

Milner’s late run was what made Liverpool’s second goal – he got into a pocket of space inside the penalty area without being tracked, and with the United defence believing that he was going to shoot, he left the ball to Salah, who finished in style.

Firmino often dropped in between the lines to receive the ball on the half-turn and look for a teammate further forward. That teammate usually was Salah, who did not hold his width, drifting inside instead. 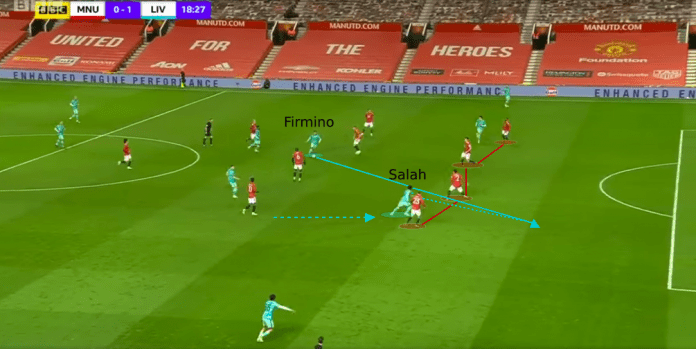 From such positions, Salah could use his pace to run at the Manchester United defence, particularly exploiting the gap between the centre-back and full-back. That is precisely how he opened the scoring.

Salah’s inward movements also vacated space for his full-back, Alexander-Arnold, who had a field day on the right, particularly in the first half.

You can see just that above – Salah has gone inside, with Shaw following suit. Rashford is nowhere near Alexander-Arnold, who has an acre of space on the right. 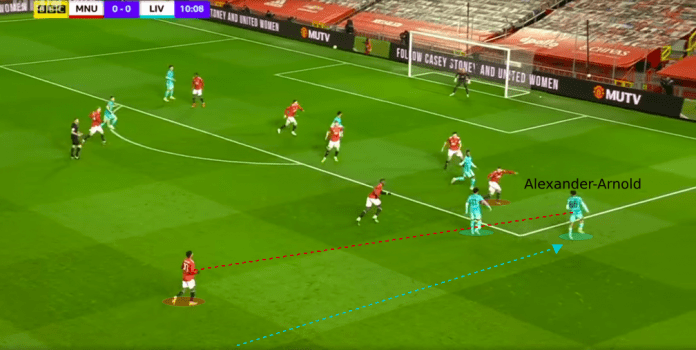 Of course, a simple overlapping run worked too, as Rashford failed to track Alexander-Arnold back.

While this system worked for the majority of the match, it’s one big weakness was Alexander-Arnold being out of position when the ball was turned over quickly. This was thoroughly exploited:

As ever, United relied on counter attacks to deal their damage. Both of their first two goals came from such situations, so let’s take a look at how they worked. 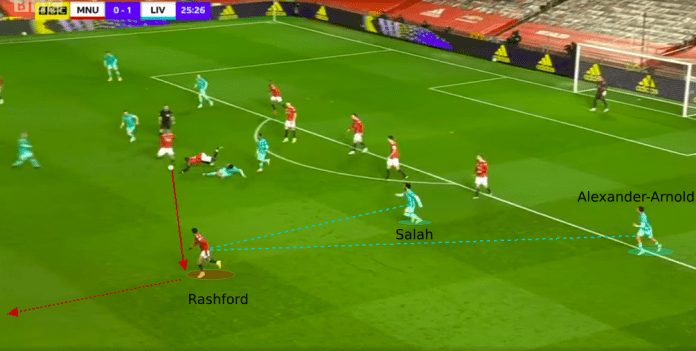 Rashford’s failure to track Alexander-Arnold back meant that he was free on the left if  United turned over possession. With the full-back often overlapping Salah, Rashford had an exceeding amount of freedom on the wing in counterattacking situations.

On the opposite side, the pace of Greenwood was used to hurt the Liverpool defence, as he too would often be ahead of Robertson on the break. Rashford found him multiple times with sweeping crossfield balls, and this was the one which led to United’s goal.

Alternatively, Rashford could go on with the ball, looking to slip a teammate through on goal from the edge of the box. 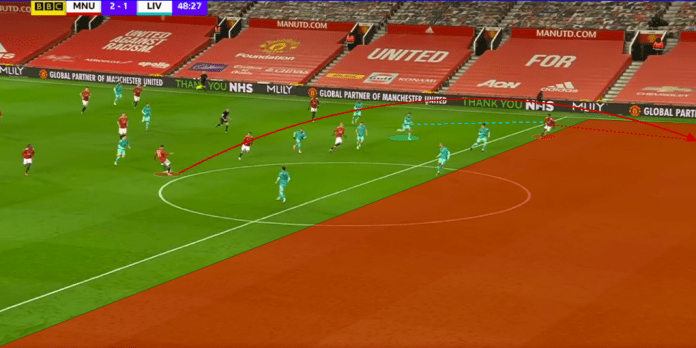 The reverse worked for United’s second goal – Greenwood picked the ball up and sent a crossfield to Rashford, who was clear of Alexander-Arnold again, and he too had a cool finish up his sleeve.

The number of United counterattacks in this match was pretty similar to the figure they achieved a week back in the Premier League, but the difference was that they actually finished the moves off and made them count in the FA Cup.

Tactically speaking, United did not spring too many surprises – they defended with discipline and lightly pressed Liverpool, using counter attacks to create their best chances.

In this sense, their set-up was similar to the one in the Premier League match against Liverpool, but as aforementioned, the difference was that they executed it fully tonight.

As for Liverpool, Klopp’s alternative system with Jones on the left wing didn’t look too bad, but Alexander-Arnold defensive shortfalls hurt him the most, particularly with an inexperienced centre-back in Williams on the right.