Arsenal scored twice in the final moments to pull off a dramatic victory at Anderlecht in the UEFA Champions League on Wednesday.

Prior to those two late goals the Gunners had looked poor and created very little against the side who are expected to finish bottom of the group. Was the result merely paper over the cracks or are Arsène Wenger’s side capable of competing at the top this season.

Sunderland were handed an embarrassing 8-0 thrashing at Southampton last weekend. The Black Cats had only conceded seven goals in their first seven games this season before being taken to the woodshed.

Sebastián Coates is yet to make his Sunderland debut and remains sidelined until November. The talented Ricky Álvarez is also out until next month and as is Italian international Emanuele Giaccherini.

Wojciech Szczęsny was suspended midweek but will return in between the sticks for the trip to the Stadium of Light. Laurent Koscielny and Mathieu Debuchy are unavailable in defence.

Jack Wilshere is suspended, Mesut Özil, Serge Gnabry and Abou Diaby all injured in midfield. Theo Walcott could make his return in this match. 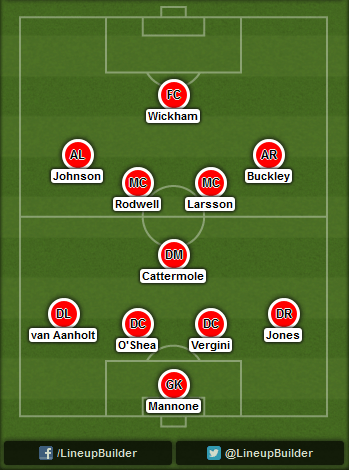 Gus Poyet likes to play three central midfielders and have two players with a bit of pace and skill down the wings to supply the striker. We’ve put Connor Wickham up front but Steven Fletcher could easily play as he’s good at finding space in the penalty area. 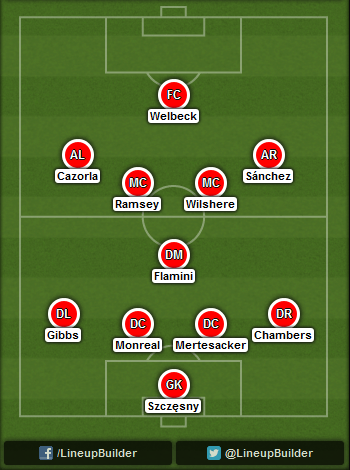 This Arsenal attacking unit looks capable of putting goals past a Sunderland defence that leaked eight goals last weekend. They also have Alex Oxlade-Chamberlain, Joel Campell and Wednesday’s hero Lukas Podolski to call upon. Defensively there are obvious concerns. This includes Mathieu Flamini starting ahead of Mikel Arteta.

Alexis Sánchez vs Patrick van Aanholt
Sunderland’s left-back likes to attack but that would be a mistake by Patrick van Aanholt with Alexis Sánchez ready to take advantage of any space ahead of him. The Chilean has been a constant thorn in the side of opponents since joining Arsenal in the summer. Sunderland cannot be expected to concede eight again this weekend but Arsenal will surely look to exploit the weaknesses Southampton exposed last weekend. Give the ball to Sánchez to let him run at them and create chances for both himself and teammates is surely a winning tactic.

Danny Welbeck vs Sunderland defence
Danny Welbeck scored the late equaliser for Arsenal last weekend to extend their unbeaten run at home to 22 games in the Premier League. The pacey striker should fancy his chances against the ageing John O’Shea in a battle between former Manchester United teammates. Santiago Vergini scored an amazing own goal last weekend, his confidence and his teammates confidence isn’t exactly going to be very high this weekend.

Aaron Ramsey vs Lee Cattermole
Sunderland’s deepest midfielder is their most aggressive too. Lee Cattermole has a large collection of yellow cards and Aaron Ramsey and Jack Wilshere run at him down the middle they can draw fouls from the Sunderland man too. The Gunners look decent from set pieces too. Aaron Ramsey is also a goalscorer from midfield looking to pull away from his marker and stroll into the penalty area unmarked. Watch the Welsh midfielder on Saturday to see if he can accomplish that.

Prediction: Sunderland 1-2 Arsenal
A whole host of injuries, a European away game and inconsistent form – we’ll go with an Arsenal victory anyway! Sunderland were hopeless last weekend and we really feel a team pushing for the top four is going to get all three points against the side who were thrashed last weekend. A but of pace and a lot of flair in that attacking unit should bring them goals.