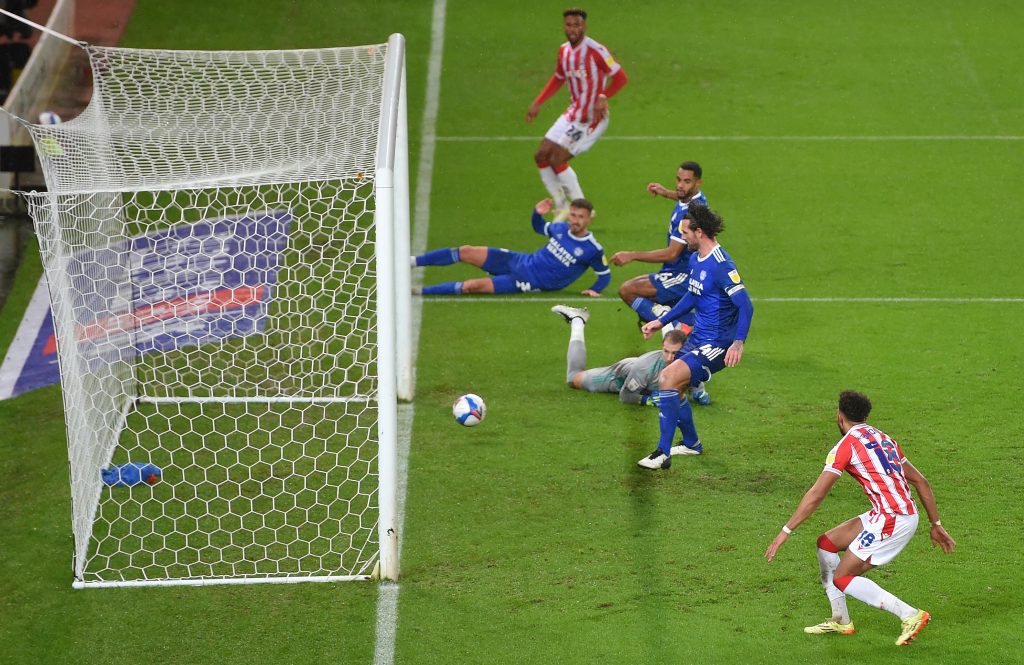 In a game that was not easy on the eye, the visitors Cardiff City came out 1-2 victors at the Bet 365 Stadium. Both sides came into this one in good form. Stoke City were looking for their third win in a row. Meanwhile, Cardiff City were aiming for their fourth consecutive victory.

Stoke were forced into making two changes to the team that defeated Middlesbrough on Saturday. Sam Clucas was replaced by Josh Tymon, whilst Tommy Smith came in for Danny Batth.

The away side remained unchanged for the fourth game in a row. Neil Harris sticking with the winning formula that has improved his side’s fortunes recently.

To be brutally honest, this half of football was tough to watch. There was a severe lack of quality on display. Possibly the only bright spark in the entire half was Stoke forward Tyrese Campbell.

Son of former Arsenal striker Kevin Campbell, Tyrese is making a big impression in the EFL Championship. Campbell cut inside onto his left foot, curling a shot just wide of the post, becoming the only shot of the half at this stage.

Campbell was at it again soon after however. Making a direct run into the box, the attacker beat left-back Joe Bennett. Campbell then drilled the ball across the danger area, when goalkeeper Alex Smithies got his fingertips to the ball. Smithies, however, could only divert the ball into the path of Cardiff captain Sean Morrison. Morrison could not adjust his feet accordingly, subsequently conceding an own goal.

There wasn’t too much Morrison could do about the own goal. It seemed a case of wrong place, wrong time.

That was as good as the first half got. Apart from a long-range strike from Harry Wilson, Cardiff offered nothing in the first half. Stoke provided very little going forward, ending the half with no shots on target. Nevertheless, somehow, Stoke went into the second half one goal to the good.

I was praying the second half would make for better viewing.

Alas, my prayers were answered. Stoke captain and former Welsh international James Chester came very close to extending his side’s lead. Chester is yet to score for the Potters, this being the closest he has come to changing that statistic.

Chester’s bullet header was saved by Smithies with the Bluebirds keeper tipping the ball onto the crossbar. It was a wonderful save, however, the referee did not see it this way.

Referee Tony Harrington pointed for a goal-kick. Somehow he failed to see the Smithies save, but I am sure the goalkeeper will not lose any sleep over that.

Tyrese Campbell was the best player on the pitch, but he was soon injured. The forward landed awkwardly after a challenge, ending his game abruptly.

I just have to mention that Campbell was made to hobble all the way around the pitch. He could barely walk. Could the medical team not have brought a stretcher on the field to help escort him off? Seemed very strange.

Another former Welsh international was to replace Campbell, coming in the form of Sam Vokes. The home side were awarded a penalty shortly after, Sean Morrison was the culprit, fouling Nick Powell inside the area. If Morrison didn’t have bad luck so far, he’d have no luck at all.

Vokes stepped up to take the penalty, with Smithies making the save. It was a poor penalty in truth, with the save becoming rather routine.

A huge turning point in the game saw a struggling Harry Wilson replaced by Robert Glatzel. The equaliser came soon after. Joe Ralls put in a great cross, with Glatzel taking a fabulous touch and slotting away with ease.

Ten minutes after the equaliser, Cardiff would take the lead. An unmarked Sean Morrison found himself on the end of a Joe Ralls corner, heading the ball onto the crossbar and over the line.

A nice moment for the centre back, whose performance thus far was one to forget.

Cardiff would then see out the game comfortably, with Stoke posing no real threat going forward.

Stoke missed the chance to go joint top of the EFL Championship. Michael O’Neill took the Stoke job thirteen months ago, with the Potters stuck to the bottom of the table. However, being in the position they are now, O’Neill deserves huge amounts of credit.

All that will matter to Neil Harris is the three points. Amassing four wins in a row in the Championship is no easy feat. The performance wasn’t great by any means, but this result continues Cardiff’s winning ways, a habit Neil Harris will not want to give up.

Not a game I would rush to watch again, but with the South Wales derby on the horizon, this continued momentum is huge for Cardiff City.