Vicente del Bosque has the task of bringing home a third straight international tournament success this summer, with the triumphs at Euro 2008 and in the 2010 World Cup meaning Spain are favourites for this year’s Euro 2012. The successful trainer has named his squad for the tournament in Ukraine and Poland, with a raft of star names included. However, with David Villa injured, Del Bosque’s selection in attack was sure to be interesting, and one name is surprisingly omitted: Roberto Soldado.

The reigning world champions have an embarrassment of riches between the sticks, with one of the game’s best in the form of Iker Casillas set to lead the side. However, if something unforeseen should happen to the Real Madrid stopper, Valdes and Reina are more than able deputies.

With Carles Puyol injured, it will be interesting to see just who Del Bosque picks to fill the experienced Barcelona man’s boots. The personnel and shape of the defence will depend on where Sergio Ramos is deployed, with the Santiago Bernabeu man’s versatility of playing either on the right or in the centre an attribute. Ramos is likely to play in the centre alongside Gerard Pique, but Del Bosque could also use him at right-back, and partner the Camp Nou man with Javi Martinez. Jordi Alba looks a shoe-in at left-back.

With only four strikers selected in the contingent and the sheer quality of the players listed above, it is likely that Spain will play with five in midfield, with a 4-5-1 formation without the ball quickly changing to a 4-3-3 whilst in possession. Xabi Alonso and Xavi are certainties in the centre of the park when fit, and they may well be joined by either Cesc Fabregas or Sergio Busquets, depending on whether Del Bosque wants to keep it tight or include an extra attacking player. David Silva and Andres Iniesta may well start from wide areas, but look to get space in-field and provide chances. Santi Cazorla could be used if Spain look for width and delivery. 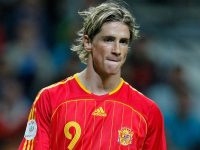 Likely to be one of four in attack, however Pedro could also be used as a supporting striker. Negredo, Torres or Llorente will be charged with finishing the chances created by the mercurial midfield maestros, which should be plentiful. After the Sevilla man’s season of injuries and Torres’ torrid time at Stamford Bridge, the omission of Roberto Soldado is surprising to say the least. The Valencia marksman has continued to progress this season at the Mestalla, and was for some (including myself) the pick of the available forwards to fill David Villa’s shoes. Atletico Madrid’s Adrian also missed out.

Del Bosque’s squad is dominated by World Cup winners, Barcelona and Real Madrid superstars and has extraordinary depth. Spain rightly go into the competition as frontrunners, however it will be interesting who gets the nod up front and given the task of firing La Roja to their third consecutive glorious campaign.