Two teams that have picked up seven points from three games over Christmas do battle at St Mary’s on New Year’s Day.

Southampton have found their form again after a four-game losing streak, which includes picking up a point against league leaders Chelsea on Sunday.

Arsenal are looking to leapfrog Southampton and go into the top four with a victory on the South Coast having beaten them earlier this month at the Emirates Stadium.

Nathaniel Clyne is a doubt after picking up an ankle injury late on at Crystal Palace. Ryan Bertrand is rested after being ineligible to face his parent club Chelsea last time out.

Morgan Schneiderlin is suspended which is a big blow to Ronald Koeman who is also without Jack Cork in the centre of midfield as a potential replacement.

Graziano Pellè and Shane Long are the only strikers available to the manager but this has been the case through much of the season so far.

Laurent Koscielny returned to pick up three points at West Ham. Héctor Bellerín is now the only defender unavailable to Arsène Wenger.

In midfield, Mesut Özil, Jack Wilshere, Aaron Ramsey and Mikel Arteta are all still out. Abou Diaby is never fit and Serge Gnabry hasn’t been fit all season.

Olivier Giroud is still suspended. Danny Welbeck started up front last time out and the same is expected at Southampton. 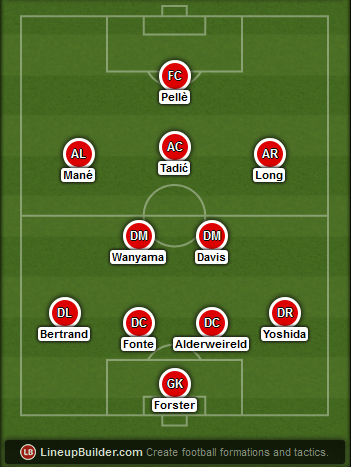 Southampton will be sweating on the fitness of Nathaniel Clyne at right-back because Maya Yoshida isn’t the best defender, but the Englishman looks to be a serious doubt. Steven Davis has played in the centre when Morgan Schneiderlin was out injured so looks to be the most obvious replacement for the French international. They have a good attacking unit. 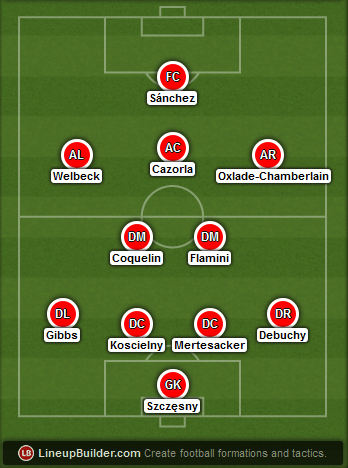 Arsène Wenger has his preferred defence available for the second successive game. Francis Coquelin had a good game versus West Ham so can be expected to stay alongside Mathieu Flamini with Mikel Arteta out. Santi Cazorla thrives in the centre so has to stay there. This front four faced West Ham but the manager could select Theo Walcott on the right wing or up front.

Danny Welbeck vs Maya Yoshida
Danny Welbeck scored only his second goal in 11 matches on Sunday but if he starts on the left wing in this one he has a favourable matchup. Eden Hazard beat Maya Yoshida one-on-one for Chelsea’s equaliser on Sunday and the Japanese defender is certainly the weak point in the back four. The England international is expected to have a good game.

Alexis Sánchez vs Southampton defence
Alexis Sánchez scored the only goal when these two sides met four weeks ago and the Chilean can be expected to be a terror for the Southampton defence once more on New Year’s Day. He has pace, strength and an eye for goal to really hurt the centre-backs and has Alex Oxlade-Chamberlain or maybe even Theo Walcott down the wing to provide so crosses, as well as playmaker Santi Cazorla behind.

Santi Cazorla vs Steven Davis
This Southampton defence is half as good as it is when Morgan Schneiderlin plays. He’s suspended so the protection in front of the back four really isn’t as good as it often is. Santi Cazorla has been in fine form since being moved back into his preferred central role and has the ability to be the difference maker in this match, particularly when Steven Davis wouldn’t be playing in his preferred role if he does indeed lineup alongside Victor Wanyama.

Prediction: Southampton 0-1 Arsenal
Arsenal have their defence back, they have a few attacking players in form and Southampton are missing their key player and potentially their right-back. It all favours Arsenal heading into this match and we’re predicting they end New Year’s Day inside the top four.