The Soccerlens Evolution t-shirt is a remake of the popular ‘evolution’ shirt.

It’s a classic black t-shirt with the ‘evolution’ graphic (tracing humanity’s evolution from primitive roots to the modern day footballer) etched in white across the chest, with ‘EVOLUTION’ written in dark red below it.

The SL Evolution t-shirt is (hopefully) the first of many cool football shirts that we’ll be releasing over the coming months. The ‘Evolution’ is on sale now and is available through our friends at Subside Sports in both their US and UK stores.

Order info and shirt image below. 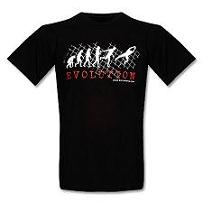