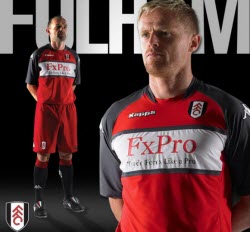 How to write a Soccerlens shirts post, using this post about the Fulham 10-11 shirt as an example.

Start off with a little backstory about the team or the shirt, or both:

After releasing the 10/11 Fulham home kit, the club and merchandising sponsor Kappa have oficially released the 10/11 Fulham away kit. The home shirt was very simple but classic, with a very nice makeover from Kappa in general.

Then describe this new shirt:

The new away kit is very different as well, involving more of the red from the crest, which is something quite new.

Add an image of the shirt, something large that shows plenty of detail.

Follow this up with more detail about the shirt, either design details or technical details. If you can quote the club or the shirt manufacturer then that works:

“The red and grey shirt has the features and design to allow lightness and elasticity to maximise athletes’ muscle strength and improve their endurance. The performance fabric contains quick dry: a high performance fabric engineered to draw heat away from the skin keeping the body cool and dry, thus allowing a great stretch fit and look.”

Then add a second image, so readers can see the shirt from a slightly different angle. Finish by asking readers what they think about the shirt:

What do you think of the new Fulham 10/11 away kit? A success or a big deviation from tradition?

If it’s a leaked image of the shirt, mention that in the title of the post and update it whenever you get the official image. If you mention a shirt that is already posted, link to that earlier article.