Former Manchester United midfielder and club legend Bryan Robson believes that United are in safe hands under new manager Louis van Gaal and the club have made progress under him since the end of last season.

Robson, the former Manchester United skipper, notes that the new signings have made an impact, despite injuries hampering the process of quick settlement for them.

Robson feels United have progressed courtesy of the new signings, drawing a direct comparison with the £100m transfer signings made by arch rivals Liverpool in summer. The former Manchester United skipper said to Manchester Evening News:

“You may say that with the money spent, it should do, but you look at Liverpool. They spent £100m last summer but haven’t improved one bit. They have gone backwards.

“You have to look at that and say the signings haven’t improved them. At least ours have helped us get better and we are back up there and not too far away.

“His signings have been really good. That is one of the main things to get right when you are a manager. You have to make sure your signings improve your squad and your team and Louis van Gaal is doing that.”

Despite spending over £150m in the summer, Manchester United’s progress on pitch can be highly questioned, as they have accumulated same points under David Moyes last season at this stage. 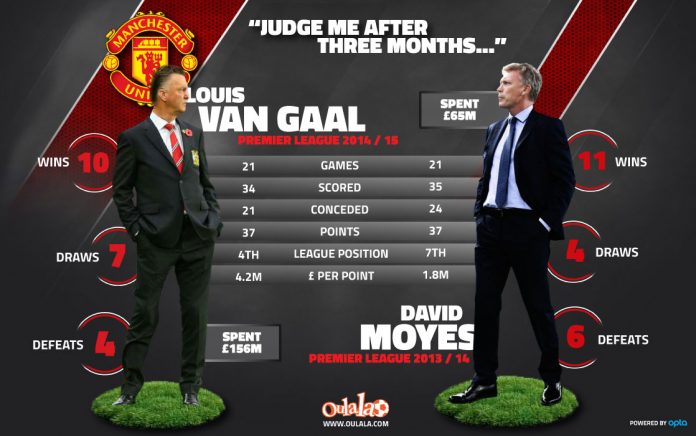 Robson states that United are still way off challenging the likes of Chelsea and Manchester City, and it requires another massive summer overhaul to get the club into a title challenging position.

“I have watched what Louis van Gaal is doing and I feel we are improving. Despite having the same points tally, I think we have improved from where we were last year” Robson added.

“City have had their group of players together longer than we’ve had ours.

“If we finish third this season then that will be great. That is still the aim. The Southampton defeat on Sunday was a setback but we have to go on another 10-match unbeaten run.”

Progress on pitch is a subjective issue where you ought to have the results to back up your claims. It has to be kept in mind that while teams like Southampton and West Ham have progressed a lot this season, making the Champions League battle a fascinating one, teams like Liverpool and Arsenal, both finished in top four and higher than United last season, have struggled for consistency.

If anything that needs to change is the overall performance of the team. Van Gaal’s team selection has come under scrutiny this week, as he left out Radamel Falcao from the squad against the Saints.

“Many United fans would probably argue that they are in much better hands with Van Gaal at the helm, but for all the criticism Moyes received for functional, one-dimensional football, it is worth remembering that United have played well only twice, three times at most, this season. Two of those displays came against Hull City and Queens Park Rangers, presently 18th and 19th respectively in the league. Despite an array of attacking options, United’s lack of speed and movement on the break has been one of the most glaring shortcomings.”

Perhaps things will change when Van Gaal will have a fully fit squad to chose from, but the task of revival won’t be easy especially with Liverpool and Arsenal, the major top four rivals, gaining bit of momentum and form, following their impressive recent results.