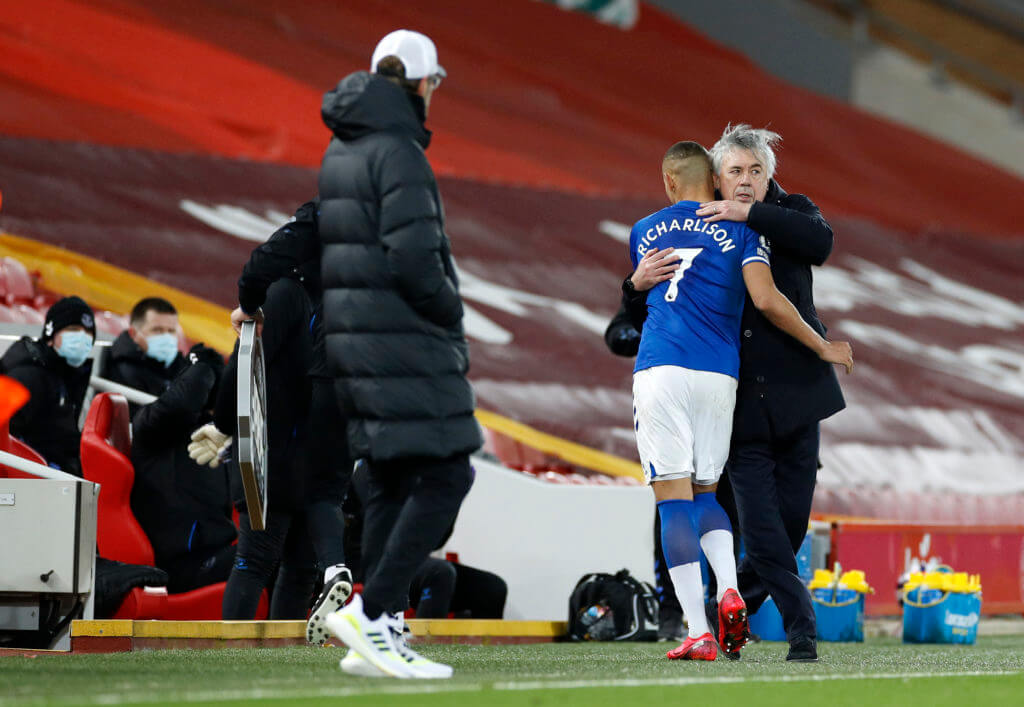 Richarlison has shared his admiration for Everton manager Carlo Ancelotti during an interview with the club’s official website.

It was a long interview (and a fascinating one) where he spoke about a lot of topics including his relationship with Ancelotti, his early years, the form of Dominic Calvert-Lewin, Everton’s top-four ambitions and more.

Richarlison talks about how he jokes with Ancelotti regarding how many Champions League titles the Italian has won.

“The manager’s arrival was really important for the Club,” said Richarlison.

“He’s a winner, he instils into the players a strong mentality to win games and that’s what’s happening.

“It is five. Five Champions Leagues: two as a player and three as a manager.

“I even joke with him about it and he says it was five not three. Ancelotti is like a father figure to everyone here.”

Ancelotti, who has managed some of the world’s greatest ever players including Kaka, Andrea Pirlo, Andrea Shevchenko and Ronaldo, has said recently that Richarlison is among the 10 finest forwards he’s managed during the 25 years of his managerial career.

However, there was a phase when he wasn’t scoring enough this season.

After Everton’s 1-0 victory over Chelsea in December – a sixth straight league game when Richarlison didn’t score – he went to Ancelotti for advice.

Ancelotti’s message was simple and yet it was so powerful.

“I had a chat with Carlo about it… the day before the Leicester game,” he added.

“He told me to relax and that I would score in the next game and, thank God, that’s exactly what happened.

What was Richarlison’s response to the pep talk? He sent a low shot skidding past Kasper Schmeichel in a memorable 2-0 win.

The past week has been simply fabulous for Everton.

They defeated Liverpool in the Merseyside derby where Richarlison scored the opening goal for the Toffees.

And, off the pitch, the club has lurched in a fresh direction after Liverpool City Council approved Everton’s application to build a 52,888 seater stadium at Bramley-Moore Dock in north Liverpool.